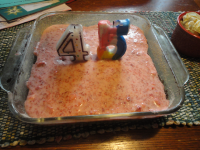 The night before my birthday Beth said, “Tomorrow you’ll be as old as me.” I disagreed, saying I was always five and a half months younger.  “How old am I?” she said, and then answered herself, “Forty-five.  How old are you now? Forty-four.  How old will you be tomorrow? Forty-five. Same age.”

It reminded me of the month and a half between my sister’s birthday and mine when she used to insist we were only three years apart instead of four.  She’d even go so far as to introduce us to new people putting stress on our ages.  “I’m ten,” she’d say, “And she’s thirteen.” I would itch to correct her but stay silent for fear of sounding petty by adding “almost fourteen.”

Now I’m long past wanting credit for being almost any age.  But I don’t mind forty-five too much.  It’s where I am now and it’s not a bad place.

Last year thanks to a fortuitously timed play date I had six hours to myself on my birthday (“More Than Cheese” 5/12/11).  I can remember how luxurious that felt and I marvel it was only a year ago because now I have six hours and forty minutes to myself five days a week. It fills up faster than I would have imagined a year ago, even though I only work about half that time. I exercise more, clean more and read more than I did back then. (And I spend more time on Facebook.) When June asked me recently if I’m sad while she’s at school because I am all alone, I said, no because I know she’s coming home soon. And it’s true, I am not sad. It was very easy to get used to this schedule and even to take it for granted.  Summer will be kicking that complacency out of me soon enough, but I’m trying not to think about that.

To make my birthday stand out this year, I decided I would front-load my work this week and finish by Thursday. I opened presents before everyone left for school and work—bath salts from June and from Beth and Noah the exact three books I wanted: Are You My Mother?, Pym and The Wind in the Keyhole.

Beth and I had a lunch date so I left for her office around 10:50.  I arrived early so I had time to get a latte and read Les Misérables at Firehook bakery. I am this close (twenty-three pages!) to finishing this twelve hundred plus page behemoth I started back in February and just in time as the book club meeting by which I need to complete it is on Wednesday. Lunch was Thai.  We often go out for Thai around Noah’s birthday because it was the last meal I ate before I gave birth to him, but this year we were too busy and he’s decided he doesn’t like Thai food anymore so we didn’t go.  Just thinking about it had put me in the mood for Thai iced tea, though, so I decided I’d make that my birthday lunch.  Beth and I had a pleasant meal. We talked about the kids and politics.  President Obama certainly gave us a nice topic of conversation when he came out in support of gay marriage the other day.

On the way back to the Metro we discussed our frustrations involving Mother’s Day shopping with Noah. We were having the exact same experience.  He was rejecting all suggestions proffered by one mother for the other, but coming up with no ideas of his own. June’s more likely to have a wealth of ideas, many of them completely inappropriate, but that’s an easier situation to manage, we agreed.

Back at home I rode the exercise bike and read more Les Misérables before the kids got home.  At dinnertime we all met up at Roscoe’s and we had a plate of marinated olives and two kinds of pizza (funghi and margherita) on the patio. While we were eating we saw one of June’s basketball teammates and a former preschool classmate, either stroll by the restaurant or come in to eat with their folks. Then on the bus home, we chatted with a dad I know from June’s bus stop. That’s the kind of town Takoma Park is.  At home we had the chocolate cake with fresh strawberry frosting Beth had made at my request and my birthday celebration was over.  But Mother’s day was yet to come.

As of Saturday at 2:45 p.m, the children’s Mother’s Day shopping was only 25% complete. June, with Beth’s help, had selected a Mother’s Day present for me and that was it.  I got on a bus with both kids and headed for the little cluster of shops that makes up downtown Takoma.  We went into Now and Then first and got to work.  I kept suggesting soap to both kids because I knew we’d use it and they even had heart-shaped soap, which I thought June would like, but she was drawn to large, decorative objects, just what we don’t need in our small, cluttered house.  (Later Beth and I discovered she tried to get me to buy some of the exact same things for Beth that Beth had refused to buy for me.) I almost consented to the large, expensive metal flower on a pole for the garden, but only if the kids would agree to go in on it, and Noah had no interest. Finally, June honed in on some brightly colored ceramic dipping bowls in the shapes of different fruits and vegetables.  I agreed she could get two and suggested the eggplant, since Beth loves eggplant, but June wanted the strawberry and the pumpkin so we bought those, along with a mug that read “You Rock” (Noah’s choice for Beth—“because she does”) and a card.

Then June and I left Noah in the store with a twenty-dollar bill I was lending him to buy my gift and June and I went to wait for him at Takoma Bistro, where we got coffee, juice and a fruit tart. In less time than I thought it would take, Noah was back, quite pleased with himself for having shopped alone, and wanting to know if he could use the change to buy himself a pastry.  He got a chocolate diamond, and soon we were back at the bus stop. I was so happy to have the shopping successfully completed, that I didn’t even mind much when June dropped the bag and broke the strawberry bowl and we had to go back and get a new one.  We didn’t even miss our bus.

Mother’s Day did not turn out as expected, however.  The plan was for Beth to grocery shop in the morning while I cleaned house and then for us all to do something together outside, maybe take a walk along a trail or something.  But I woke up Sunday morning feeling dizzy and sick to my stomach and spent most of the day in bed. And that’s where we opened presents.  June’s gift to me was a cookbook of bean recipes and Noah got me the eggplant dipping bowl and soap I’d been urging the kids to buy for Beth.

In the afternoon Beth took the kids to Wheaton Regional Park while I stayed home and slept and read.  Over the course of the day I read three Washington Post magazines that had been accumulating on my bedside table and almost half of Are You My Mother?  So, the day was not completely unpleasant, though I was sorry to miss the outing, which had been my idea in the first place.  Beth and the kids had a picnic dinner of hotdogs, potato salad, broccoli slaw and corn on the cob in the backyard.  I ate some watermelon in bed as an experiment and then came out to join them and ate a little potato salad.

At one point in the early afternoon, noting how any strong smell was upsetting my stomach, I told Beth it felt a little like morning sickness.  “Well, it had better not be,” she said,  “Or we’d have a situation.”

Several situations, I corrected.  I suppose the absence of pregnancy scares in one’s mid-forties is one of the benefits of lesbianism.  As much as I treasure the memories of pregnancy and my kids’ infant and toddler years, it’s not an experience I want to repeat at this point in my life. I like where we are now, with both kids in school and increasingly independent.  June is reading well enough that I often find myself wondering what she’s up to and then I go find her with her nose in a book, often a chapter book. And starting next week, Noah is going to take on a new chore. He will be cooking dinner, or helping me cook on Saturdays. Seeing them grow into these older, capable kids is a treat that I get to experience every day and that can’t be lost by being sick on the second Sunday in May.