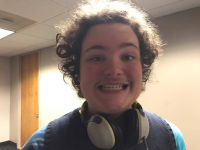 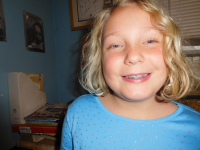 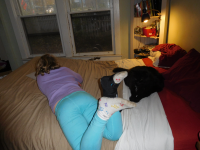 In a period of just nine days, Noah got his braces off, June got hers on, and she swapped her boot for an ankle brace.

June got her braces two years younger than Noah and she’ll be wearing them longer, and in two phases because she has more serious bite issues. Her teeth were sore for a while and she complained at dinner the first night she had them, “Noah is flaunting his braceless teeth at me.” But she got a lot of compliments on the teal color she chose and she said her friends at school told her she looks “adorable” with them, so there’s that. She’s supposed to brush after every meal now and a boy who saw her in the hallway with her toothbrush called her a nerd for brushing at school. I asked her if that upset her and she said no, “because I already didn’t like him.”

Today June got her boot off after wearing it for almost four weeks. She has a brace now she can wear with shoes. She’s a little wobbly on her feet and isn’t supposed to try to run for another three weeks, but it’s progress.

We are all also trying to brace ourselves for the upcoming change in administration. It’s not easy. It’s hard to know whether to be more appalled by the steady stream of horrifying appointments—a white supremacist as chief advisor, a climate change denier in charge of the transition at the EPA, an opponent of civil rights at the Justice Department—or the hate crimes committed by people who now feel emboldened.

You’re probably painfully aware that there’s been a spike in hate crimes nationally. Just in our little corner of the world, a Black Lives Matter sign at UCC church in Silver Spring that a friend of mine attends has been repeatedly vandalized. An Episcopal church in Silver Spring with a majority immigrant congregation had their sign advertising Spanish-language services defaced with the words “Trump Nation. Whites Only.”

And in more chilling examples, swastikas were drawn at a Bethesda middle school and at the French immersion elementary school a biracial friend of June’s attends, someone wrote “KILL KILL KILL BLACKS” on a restroom wall. Then last Friday a group of white nationalists were doing Nazi salutes at an Italian restaurant in Friendship Heights, a restaurant we frequent because it’s near the kids’ dentist. A boy who went to Noah’s preschool a year ahead of him and who’s now a junior at his high school heard about it on Twitter and got there in time for the protest.

When I went to book club about a week after the election, I expected to find the members in a variety of emotional states, from glum to energized to organize. It’s not a politically-focused book club, but it’s an older lefty crowd for the most part. I’m the youngest regularly attending member, at forty-nine. When I got arrived, there was no pre-discussion chatter, which is a little unusual. Everyone was silent until we started discussing our book, The Secret Chord. It’s historical fiction, based on the life of King David. The election never came up, which was also unusual. People often want to connect what we’re reading to current events and it’s hard to stop thinking about this particular event.

Once we’d finished and were preparing to leave, one man who’s fairly involved in local politics, said without preamble or explanation, “Does anyone have any reason be hopeful?”

There was a long silence. It seemed no one was going to say anything so I searched for something, even though I haven’t exactly been a ray of sunshine lately. I said the fact that we’d just read a book that takes place three thousand years ago might encourage us to take the long view. The story was full of betrayal and violence, based as it is on the Old Testament. But David’s tumultuous reign led to the more peaceful and just reign of his son Solomon. I didn’t say it that well at the time, but I wish I had because they were all so sad…

But as I read political discussions among liberals and progressives on Facebook, it’s hard to see the way forward. Did Trump win because he mined a deep seam of racism and misogyny in American culture? Or did Clinton lose because she didn’t focus on economic issues important to the white working class, who voted for Trump despite his hateful rhetoric and not because of it? (Although if that’s the case, it’s sobering to note that racism wasn’t a deal-breaker for big chunk of the electorate.) Or has the role of class been overstated here, given how many middle and upper class whites voted for Trump, in which case it might be about race after all. No one on the left seems to agree, which makes it hard to know how to proceed.

But are we really just going to argue about what to call the march on the day after the inauguration and whether we should be wearing safety pins or not? I hope not.
And speaking of safety pins, I found one on one of June’s shirts as I was hanging wash on the line last week. Somehow I didn’t notice it when she was wearing it. I’d explained briefly why some people were wearing them and she’d decided to wear one to school herself. I know people are divided on whether this is a helpful gesture or not, but I was moved that she took it upon herself to do it.

Something else that made me feel hopeful last week was the massive walkouts at local high schools. The week after the election, there were walkouts Monday, Tuesday, and Wednesday in suburban Maryland and the District. These were mostly peaceful, but unfortunately violence broke out in Rockville when a kid in Trump hat confronted the crowd and was kicked and punched by protesters. I don’t condone or excuse that.

Here’s an article about the walkout at Noah’s school, where about a third of the student body walked out and a smaller group took to the streets.

Noah was at the orthodontist getting his braces off when the protest started but when he got back to school and discovered his English class empty—because every single kid had walked out—he went to the stadium to join them. He didn’t take part in the street protest. He’s not a natural rebel and he hates crowds, so I’m not surprised but I’m glad he participated in part of it and that his school’s walkout was peaceful. I’m proud of all the kids who go to his large, diverse school and their passion and commitment to social justice.

At each rally I go to (and so far I’ve been to two—one in Takoma and one in Silver Spring), Blair students have given speeches alongside religious leaders, local and federal government officials, school system administrators, and members of the police. These teenagers haven’t succumbed to despair, which helps pull me back from the brink when I get close.

For my part, I’ve signed petitions and picked up the phone although I absolutely hate making political phone calls. Last week I asked my mom and sister if in lieu of Christmas gifts we could all donate to progressive organizations and send each other cards to open on Christmas that say what organizations we chose. They both said yes and that made me feel good, like we could all dig a little deeper into our wallets now. It’s a small thing, but like Noah, I’m not a natural rebel. Maybe over the next several years, I will learn.