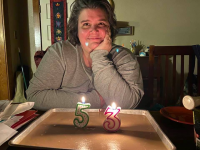 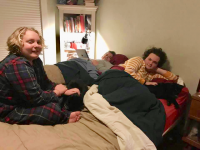 We’ve had a lot to celebrate the past few days because Noah came home for Thanksgiving break on Friday and that was the day before Beth’s birthday. Actually, he got home so late it was almost on her birthday, but I’ll get to that.

That morning was gray and rainy but I was cheerful as I set out for the 7-11 to get a bottle of cranberry juice and a ginger ale. Back when I was teaching, I always used to assign a paper due the class before Thanksgiving break. I’d collect them and take the stack to the snack bar, which was usually deserted so close to break, so it was a nice quiet place to work. I’d get a cranberry juice and a ginger ale and mix them together in a mug I’d bring from my office and I’d drink this concoction as I started to grade the papers. Every now and then I still get a craving for it and it always brings back that feeling of mingled industry and holiday anticipation. Knowing Noah was attending his last class before break and would soon be on a bus heading south put me in the mood for it.

Noah and I exchanged occasional texts throughout the day, but despite the distraction I had a pretty productive day, writing about a third of an article I’d been struggling to research and outline much of the week. North was at a play with Lyn and then sleeping over, so I asked Beth if she’d like to go out for pre-birthday pizza and she said yes. We met at Roscoe’s and discovered there were no free tables and two parties on the waiting list ahead of us. I heard the hostess tell the people in front of us it would be a half hour, so presumably for us it would be longer. This was the first part of the evening to go slightly awry.

After thinking it over a bit on a bench outside the restaurant, we decided to order to go, as that would probably be faster than waiting for a table. Eventually, we were on our way to the bus stop with our eggplant crostini, mushroom pizza, almond brownie, and chocolate-peanut butter cookie. We needed to heat up the crostini and pizza, but as I told Beth as we finished our meal, it wasn’t as fancy as going out but it was more fancy than eating frozen pizza, which was the original plan.

Meanwhile, Noah was having an interesting ride. The bus driver forgot to stop at Philadelphia and had to circle back when some passengers who wanted to disembark there informed him he’d passed the city. While the bus made its way through the City of Brotherly Love, someone threw a rock at it and cracked a window. (Perhaps the bus driver hadn’t forgotten to stop there after all, but had a premonition.) Anyway, that caused another delay while the driver stopped to assess the damage. Eventually he decided it was safe to continue, but the bus, which was due to arrive at Union Station at 9:40, didn’t pull in until 11:10. Fortunately, Noah was keeping us updated with occasional texts and Beth was tracking his phone’s location so we got there just about the right time and didn’t have to hang out in the bus bay for an hour and a half.

It felt strange to be leaving the house at 10:50, a time when we’re usually fast asleep, but as we drove through residential and commercial streets of D.C., I noticed a lot of lights on inside houses and restaurants and the streets were not exactly deserted either, so maybe not everyone goes to bed at ten on a Friday night in the city. Who knew?

We found the bus, with had “Adventure Tours” painted on its side—a little truth in advertising there—and through the open door of the luggage compartment, we could spy Noah bending down to get his bag on the other side of the bus. I refrained from running around the bus and waited until he reached us to hug him.

In the car we told him about the art show we’d attended the previous night and how North’s been completely off crutches and cane for a few weeks now and he talked about school. I asked how an audio project he’d been working on for his cinema production class at Hershey Park turned out. (He’d recorded people screaming on several of the rides as he rode.) He said the professor said it was “epic.”

When we got home, Beth and I went to bed. It was almost midnight, so I told Beth “Happy birthday,” and she noted it was two minutes early, so I waited and said it again a few minutes later. Noah was up a while, until at least 1:15. Every now and then I could hear him opening and closing doors or rummaging around in the kitchen making himself a bowl of cereal. It was comforting hearing him moving around the house and knowing he was home.

Saturday: You Say It’s Your Birthday

Beth had to take North to therapy in the morning and Noah didn’t emerge from his room until just before they got home, around 10:15. The kids greeted each other and pretty soon North was gone again, off to see Frozen II with Zoë and Norma, but we had time to gather around the table and talk a bit while Noah ate his oatmeal.

After North left, Noah wrapped his birthday present for Beth and he and I started to read Little Brother, which he’s reading for Emergent Media. It was published in 2008 and imagines a post-9/11 future in which U.S. citizens are even more surveilled than they currently are. The protagonist is a teen hacker and his friends who are cutting school and find themselves in the wrong place at the wrong time when a new terrorist attack occurs and they get swept up into government custody. It’s more like something Noah would choose to read on his own than the novels he reads for school generally are.

Later in the afternoon, I had a nap to recover from my late night and then got up and made Beth’s birthday cake. It’s a dark chocolate cake with coffee frosting and I’ve made it for her birthday so many times the page in the cookbook is stained brown with cocoa powder. When I’d finished that I asked Noah if he’d like to help me make dinner, baked mac-and-cheese from Beth’s mom’s recipe, veggie burgers, and green beans. He said, “I guess it is Saturday,” (his old night to cook dinner) and agreed. He played Lindsey Stirling on his phone while we grated cheese, chopped onions and green beans, and stirred the sauce. It was nice to be reading and cooking with him again.

After dinner, Beth opened her presents. I got her a set of Fiestaware mixing bowls because I’d recently broken one. Ironically, the broken mixing bowl was a birthday present from Noah and me nine years ago when he’d broken a mixing bowl. It made me remember how that same birthday, North got Beth a mug from the same company, and gave her the following hint: “It’s purple, and it has a handle, and you can drink from it, and it’s called a mug.” This has become a family joke.

To go with the new mixing bowls, which are blue and pale green, the kids each got Beth a baking mix with the promise to bake—whoopie pies in North’s case and chocolate doughnuts in Noah’s. When he placed the order he didn’t realize you need a doughnut pan to make them so he ordered one at the last minute, too. I see a lot of doughnuts in our future. Beth seemed pleased with her gifts.

After I finished the dishes, we watched two episodes of Speechless, which we haven’t watched since Noah left for college. North, Beth, and I were all in bed by 9:45, but Noah’s keeping college student hours now. North reported the next day, somewhat indignantly, that when they got up at one a.m. to use the bathroom he was taking a bath.

North made banana pancakes for everyone for breakfast, but we ate without Noah, who was sleeping in again. Beth was out at the farmers’ market before he got up and when he did, at 11:40, it was only because North set off the smoke detector making a quesadilla roll-up. He had his pancakes then and we read some more Little Brother.

In the afternoon, Beth took North and their friend Jade ice skating and I went swimming. Noah stayed home and when I got home, he was watching CNN impeachment coverage. I warned him against getting his hopes up and after we both talked to my mom on the phone, we read again. (The book is longish and we’re hoping to finish it or come close in a week.) Beth, North, and Jade (who was staying for dinner) came home, and Beth made ravioli and sautéed spinach.

This week North’s got two and a half days of school and Beth’s working from home so we could more easily take North to the pain clinic for a post-physical therapy assessment this afternoon and so we can leave for the beach Wednesday afternoon. I am looking forward to more family togetherness both here and in Rehoboth. I don’t have to wait until Thursday to feel grateful to have everyone under one roof, though. I already am.