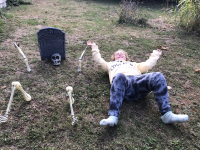 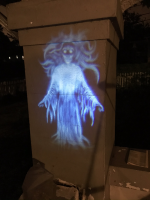 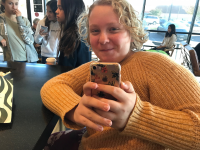 It was kind of a strange Halloween. We’re missing a kid and the other one went straight to Norma’s apartment after school with Zoë and from there they went to Zoë’s house where they met up with Evie and all four of them trick-or-treated in Zoë’s neighborhood, so I barely saw North all day.

Around 5:15, I started playing my Halloween playlist and went out into the yard, righting fallen tombstones, and turning on the strings of ghost and bat lights and other light-up decorations and lighting candles in our mildewed, squirrel-bitten jack-o-lanterns. It was too light out to really see anything illuminated yet but I was about to start cooking and I thought trick-or-treaters might start to come soon so I wanted to have those tasks out of the way.

I usually make a quick dinner on Halloween so the kids can get out the door, but as there was no one who needed to get out the door, I made one of the more complicated dinners of the week—a vegetable-bean casserole topped with slices of sweet potato and sprigs of rosemary from my new rosemary plant. (I always like to buy some hardy herbs when the rest of the garden is dead or dying.)

The casserole was still in the oven when Beth got home around 6:30. By then we’d had about a half dozen trick-or-treaters, starting with the amusing juxtaposition of Michael Meyers and a cheerleader. I’d guessed correctly people might start coming earlier than usual because a storm with heavy rain and high winds was predicted, though over the course of the day, the storm’s estimated start time got pushed back from eight to nine, a boon for trick-or-treaters. The National Weather Service was advising people to take down their decorations if they didn’t want them blown away, but we decided to leave them up, at least for a while. It takes a long time to get our yard decorated and it was just too sad to think about taking it all down on Halloween. Plus, North was planning to bring Norma, Zoë, and Evie on a tour of our yard when Zoë’s folks brought them home.

While the casserole finished cooking, Beth gathered up the recycling (though she didn’t take it outside because of the wind) and set up the fog machines. The bigger one took some YouTube trouble shooting but she eventually got it going.

Beth and I had been wondering if we’ll tone down the yard display when both kids are gone, but while Beth was outside working on the fog machines, she heard a group of approaching trick-or-treaters say, “This house is cool as shit” and then as they got closer they lamented, “They don’t have smoke this year!” So it seems we might need to keep it up. We have a reputation to uphold after all.

We ended up with about twenty-five or thirty trick-or-treaters, a normal amount, just shifted earlier. The last group, two Hogwarts students and a soccer player, came at 7:45. North was home by 8:35, hungry because they’d applied the layer of latex over their mouth at 4:00 and had skipped dinner so they wouldn’t have to take it off and reapply. They showed their friends around the yard, and shortly after that, around 9:00, we went out into a gentle rain and started bringing in the lightweight decorations, but we left the heavier ones and the ones that were securely attached to something and an hour later we went to bed, hoping for the best.

It did pour rain that night and it was quite windy, but the next morning, nothing seemed to be missing. Beth and North went to work and school. I had a scattered, abbreviated work day because I’d had trouble getting to sleep the night before and I needed to leave the house to take North to physical therapy at 2:25. I didn’t skip my customary morning walk, though, because I wanted to have one last chance to go down some side streets I hadn’t explored recently and check out those neighbors’ Halloween decorations.

North hadn’t had a physical therapy appointment in a few weeks. They’re doing much better, going to school and on outings without crutches or cane more often than not, and we’re wrapping up their treatment. (They have just one more appointment next week.) They were using a cane that day, possibly because they’d walked a lot while trick-or-treating, but they did great in therapy, impressing the therapist with their leg strength. For the first time ever, when the therapist asked them to rate their pain, they said they had none, just a little fatigue. I think the aquatic therapy really helped.

North was a bit agitated during the appointment, though, because they discovered early in the session that their phone wasn’t in their pocket, and using my phone to track it, we learned it was travelling away from the rehab hospital, presumably in the Lyft we’d taken there. I called and texted the driver, but got no response.

While we waited for the Lyft to take us from North’s school to the hospital and then after the appointment while we waited for the hospital shuttle to take us to the Metro, when North wasn’t fretting about the lost phone, we were busy negotiating discussing our evening plans. We’d considered going to a ghost story reading at Rhizome, a local art space (the one where Noah’s film camp met this summer). But looking at the promotional material made me wonder if it was really aimed at adults and older teens, plus there was a “necromancers’ cotillion” and the idea of dancing in public was kind of horrifying. (I probably haven’t done that since North outgrew Circle Time at the library.) The timing was also problematic. There wouldn’t be time to go home, eat dinner, and get there, but too much time to kill if we went straight there from the Metro.

Beth had texted me some information about a possible alternative, a showing of Phantom Carriage, a 1920s silent horror movie at AFI. It would have been right up my alley, since I love vintage horror, (and Noah would have liked it, too, since he has a soft spot for silent film), but it was a non-starter for North.

However, they didn’t seem wed to going to Rhizome, and countered with going to see either the Addams Family or Maleficent: Mistress of Evil. I was tired and thinking if North’s choice was to see a movie that wasn’t a one-time event, we could do it Saturday instead and just go home, eat frozen pizza, and watch something at home that night. But North pleaded successfully for pizza at Mod and a movie out. We texted Beth to invite her and to my surprise, she said yes, but she couldn’t make it to Mod in time to eat with us. So I stashed the leftovers in my backpack for her to reheat and eat at home, and we met at the theater, where we watched The Addams Family.

Saturday morning I had a message from Lyft about the lost phone and we made plans to meet up with the driver at a Starbucks to hand it off. Beth and I took down the Halloween decorations and boxed them up in the early afternoon and a little later, Beth and North went to get the phone. They were very happy to get it back and they had seventy-nine text messages to read, not to mention emails and Instagram messages. They were also glad not to have to pay half the cost of a new phone (per a prior agreement if the phone was broken or lost).

Our yard is looking a little sad and lonely now, without all its October playmates, but I have to say giving treats to costumed kids, seeing North get closer and closer to normal mobility, having a family outing, and not having to buy half a new phone is cool as… well, you know.