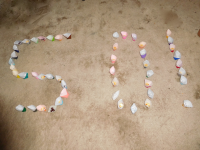 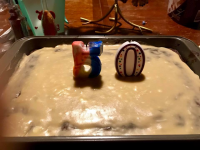 During all the awful tumult of the post-election fallout, a good thing happened. Beth turned fifty. Her birthday usually comes right before Thanksgiving and this year it was the day before. Because of that, it often seems to usher in the holiday season for our family and Tuesday afternoon, as I was out getting a birthday card for her, I felt my heart lighten a little. We still have a lot to celebrate.

When Beth and I started dating, I had just turned twenty a couple months earlier and she was several months shy of twenty-one. We’ve spent our twenties, thirties, and forties together and now we’re embarking on our fifties. It’s a comforting thought, that we’re in this together, come what may.

Beth took her birthday off so we could cook and prepare for our Thanksgiving trip to the beach. (We’re renting a house in Rehoboth from Thursday to Sunday.) The kids had a half-day, so in the morning I took Beth out to La Mano and we got coffee and split a cranberry-orange scone. There were no seats available so we walked up to downtown Takoma and sat at the table outside Dolci Gelato, which wasn’t open yet, so it didn’t feel like we were squatting. It was a pretty day and the morning sun was warm enough so we didn’t feel cold.

From there we went to the hardware store, because Beth knows how to party on her birthday. No, seriously, it was birthday-related. ACE sent her a $10 coupon for her birthday and she bought twenty leaf bags with it. Then we drove to the library so I could return a book and get another one, but I forgot it doesn’t open until noon on Wednesdays, so we came home and puttered around the house. I worked a little and did laundry. Beth made cranberry sauce and mushroom gravy.

June got home around one and started to set up her gift for Beth—fifty origami cups she’d made over the last couple days, each with candy inside (miniature Reese’s peanut butter cups, Hershey’s kisses, or espresso caramels) arranged on the living room floor into the shape of the numerals 5 and 0. I’d told Beth ahead of time June’s gift was “showy and sweet” and Beth replied, “Just like June.”

It took longer to set this up than either June or I anticipated. We’d tested it on the living room carpet the day before to see if the cups would stand up when weighted down with candy and the our test cup did, but it turned out fifty of them were more of a challenge and they kept falling over. They were all shaped just a little differently and different kinds of candies weighed them differently as well. The Reese’s cups worked better than the kisses or the caramels. June also wanted them to touch each other, which she thought would help them support each other and I thought would lead to domino-like toppling. We were both right at different points in the endeavor. She ended up making the five, I made the zero, and since we had cups left over, she made an exclamation point.  Noah observed that depending on where you stood to view it, it could look like 50!, 105, or 501. Beth told June it was “magical.”

All Beth’s presents from us were food. I guess, given the circumstances, we all gravitated toward comfort food. Noah got her a set of dessert sauces—bittersweet chocolate, chocolate peanut butter, sea salt caramel, and dark chocolate sea salt. I got her two boxes of fancy crackers, two hunks of cheeses we’d never tried (Piave Vecchie and dry Jack), two baking mixes (brownies and molten chocolate cake), apple cider syrup, and pumpkin pancake and waffle mix.

After Beth opened her presents, I made brandied sweet potatoes and while they were in the oven, we headed back to the library and then to the grocery store to get a prescription. Noah was just finishing drumming when we got home, so I read most of Act Three of Harry Potter and the Cursed Child to both kids. They’re not often free at the same time, so reading this play has been slow going, but we’re all enjoying it.

Next I made Beth’s requested birthday dinner—breaded baked tofu sticks with curried tartar sauce, egg noodles, and homemade applesauce. For dessert, I made a chocolate cake with coffee frosting. I put it in the oven just before we sat down to dinner. About five minutes before it was supposed to come out of the oven, I realized I didn’t smell cake. Turns out I’d turned off the oven when I took the sweet potatoes out and I never turned it back on when I put the cake in. Luckily, it only needed to bake a half hour and by cooling it on the porch, I was able to get it frosted so we could all eat cake and ice cream before June’s bedtime.

A few days ago, I told Beth I was thinking of not doing a Christmas card this year. It just seemed like a lot of work and it was hard to imagine putting a smiling picture of us on the front of it or writing a cheerful letter about what we’ve been up to this past year. The annual card means more to me than to her, so I thought she might go along with the idea of taking a pass. Instead she looked surprised.

I said I wasn’t sure if it was just post-election depression and if I’d regret it later if we skipped a year. She asked if I’d thought it was too much work last year. I said no, so clearly it was post-election depression, but that the part I wasn’t sure about was whether I’d regret it or not. She gently suggested we take some pictures at the beach “just in case.” We discussed the possibility of sending a card with no letter, of taking a more pensive looking picture, of putting some political message on the card.

I’m still not sure what we’re going to do, but I think she handled it just right. If she’d said that we should do the card, I might have said it was pointless and started crying. If she’d said sure, let’s skip it this year, I probably would have cried, too, because that would mean it really was pointless. We’ve had our share of rough patches and misunderstandings over the years, but sometimes she knows just how to handle me. I guess twenty-nine years of experience comes in handy there. I’m lucky to have her in my life and I’m happy she’s been on Earth for fifty years.

I’ll close with this excerpt from Springsteen’s “All That Heaven Will Allow,” which Beth put on a mix tape she made for me when we were much, much younger.

Happy fiftieth birthday, sweetheart. I love you in good times and bad.