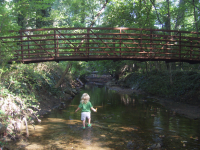 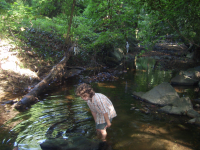 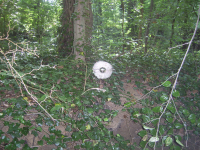 Tuesday evening after the kids were asleep, Beth and I lay in bed discussing her upcoming business trip to Pittsburgh. I told her I had more trepidation about it than usual, mostly because our summer schedule is so chaotic already. Some weeks Noah is at camp, others he isn’t and each camp is located somewhere different and has different drop off and pickup times. I try to keep June busy because it’s better for both of us to get out of the house but we have no regular scheduled events, other than Circle Time at the library on Tuesday mornings. On the occasional Wednesday she attends a drop-in music class, but not very often because it only meets in the morning three times this summer and afternoons don’t work for us because of Noah’s camp pickups. Most Friday mornings, but not all, she has Leaves playgroup, which meets at a different playground every week. Sometimes we go to story hours at a local children’s boutique (http://shop.thepajamasquid.com/) or the Co-op and she has play dates every now and then but not as many as I’d like because it can be hard to co-ordinate around everyone’s vacations. The point is that I am a creature of habit and easily discombobulated by this rotating schedule so the idea of parenting without backup for five summer days and four summer nights was a little overwhelming.

Here’s what happened in a nutshell: I dropped Noah off and picked him up on time more often than not. Pickups were more difficult because I needed to wake June from her nap to go get him so I tended to wait until the last possible minute and the bus we needed to catch when we left that late was not all that reliable. So I was five minutes late one day and ten minutes late another day, but that was the worst of it. I also managed to send Noah’s lunch with him every day, though one day I had my key in the front door before I realized that not only was it not in his backpack, it wasn’t even packed yet. On Friday he brought home his final projects from robot camp, a sound-activated walking robot he built from a kit and hand-decorated t-shirt that is meant to make him look like a robot when he wears it. This was the last day of his last camp. Third grade is only two weeks away. Where did the summer go?

June had a play date with the Dragonfly and attended her playgroup and made a birthday card for the Squash Bug, whose party is this afternoon. I folded a watercolor she’d painted in half and she dictated the following message for me to write in it: “Dear Squash Bug, I hope Squash Bug gets all her presents. Love, June.” She and I danced in the kitchen to some energetic fiddle music on A Prairie Home Companion. She wet five pairs of training pants in one afternoon after gorging on watermelon at playgroup that morning. I had to put her back into diapers until I got a chance to do laundry. She also got her first bee sting when we wandered into a swarm of angry bees on an evening walk Wednesday. They were swarming around a fire hydrant of all things. We all got stung, but, being three and never having experienced a bee sting before, June took it worst. The bright side is we now know she’s not allergic. Just after I finished applying ice and baking soda paste to Noah’s chest and my arm–June refused all suggested treatments–we were all locked into the back of the house when a doorknob fell out on the other side of the door. Noah was completely panicked, even though I kept telling him we’d find a way out. It was worse than the bee sting. Finally I sent him out his bedroom window to re-enter the house and free us.

Later Noah tripped on a ball in the yard and skinned his elbow and he tried to teach June to play hopscotch without much success. He finished book 7 in the Series of Unfortunate Events—The Vile Village—and started book 8—The Hostile Hospital. He told a lot of jokes— here’s my favorite: What’s faster hot or cold? Hot. You can never catch a hot. The kids argued with each other incessantly, taking occasional breaks to argue with me. Noah pushed my buttons over and over. June gave him a big hug after he had a timeout. All four of us splashed in the creek and toasted marshmallows on the stovetop to make s’mores. We ate kid-pleasing dinners every night—macaroni and cheese, fried tofu, frozen pizza and veggie chicken noodle soup, though they did have to eat their vegetables and drink their milk as well. And every night before bedtime, we talked to Beth on the phone, short, chaotic conversations with everyone trying to talk at once.

In between all this, I did a couple loads of laundry, did dishes –usually a whole day’s worth all at once, vacuumed, swept the porch, watered and weeded the garden, wrote a short article on the nutritional value of squash, rewrote said article and finally got caught up on the newsletters I clip for Sara – I didn’t work on the project while we were in West Virginia so I was pretty behind.

I think I did okay.

Saturday was the nicest day, despite the fact that June woke for the day at 5:35. This might have been because we didn’t have to be anywhere at any specific time so even though we were out the door for a two-hour walk by 9:00 the morning did not have the frantic tumult of the two previous mornings. I snuggled with June in bed and read to her until 6:50, then we got up and I put oatmeal, veggie sausage links and cantaloupe on the table instead of the cold cereal we eat most weekdays. I read the paper for a while the kids played and then we got dressed and left. The official purpose of the walk was to go to the post office and mail a package of hand-me-down Babybug magazines (http://www.cricketmag.com/ProductDetail.asp?pid=10) for my cousin’s baby, who just turned one, but it was a long, meandering sort of outing. I wanted to stop at Starbucks—sleep deprivation makes me crave coffee even though I usually drink it decaf– and we also swung by the 7-Eleven to buy chocolate bars for that evening’s s’mores.

On the way home June said she didn’t want to go home, she wanted to go somewhere else but she didn’t have any specific suggestions. We were near a path I thought lead to a playground, so we wandered down it. It actually went to a section of Long Branch creek we don’t often visit. The water was shallow but not stagnant, just perfect for wading and throwing rocks. Noah stood under a bridge and pretended to be the troll from The Three Billy Goats Gruff. We found a really cool spider’s web. The sun filtered through the leaves above, bringing out the highlights in Noah’s golden brown curls. A leaf fell into his hair and it reminded me of a garland. Playing in the sun-dappled water, he looked like a young faun. That was the very best moment, a beautiful summery moment I will cherish from this week long after I forget the stress and exhaustion and arguments and why I even sent him to that timeout.