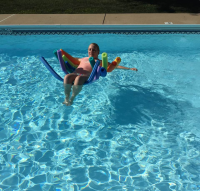 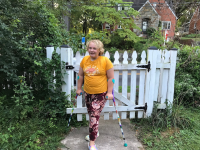 Beth spent a lot of time in August driving. In fact, over the last three weeks of August (and the first day of September) she was on the road a total of ten days. We took four road trips, in various combinations, but as the sole driver, she was the common denominator on all of them.

A little over three weeks ago, Beth and I took North to camp. This was a day trip, as the camp is only three hours away, in South-Central Pennsylvania. We needed to feed North lunch before drop-off so we went to the same pizza place where we’d had lunch the year before. North actually remembered the name, Paradise by the Slice, which aided us in finding it. It has a subtle tropical theme in its décor and pretty good pierogies in addition to pizza. I think I may sense a tradition forming.

The second and longest trip, just over two weeks ago, was to fetch North from camp and drop Noah off at college, and if you read my last post, you know all about that. The third trip, a week and half ago, was to Wheeling. Beth took North to her mom’s house for the traditional week of one-on-one grandmother time the kids call Camp YaYa and then drove back the next day. (Noah attended his session of Camp YaYa in June, right after graduation.) While at YaYa’s, North swam and did leg exercises in the condo pool nearly every day, went shopping for school clothes, went to the movies, gave a reading about fracking at YaYa’s church, attended a performance of bluegrass singer Hazel Dickens songs at the library, ate out a lot, and made banana bread.

While North was gone, Beth and were alone for five days, which is the longest we’ve ever been alone since Noah was born. In fact, I think I can count the kid-free weekend get-aways we’ve had on one hand. I’ve always been a little jealous of parents we know who manage to send their kids to sleep-away camp or the grandparents’ house at the same time. So I’m sorry to report we didn’t really use the five days well. It was all work days and AT&T was on strike so Beth was working some evenings, sometimes long after I’d gone to bed. We did go out to dinner the first night, at the (relatively) new Mexican place in Takoma Park, Cielo Rojo. I’d only been there once before and I like it so that was nice. And then I made four adult-friendly dinners in a row, kind of a luxury. Beth’s favorite was zucchini-eggplant sandwiches with queso blanco. (She’s a big fan of eggplant, and up until this summer neither of the kids liked it. Noah’s the convert. North’s the holdout.)

On Thursday morning I went out to get the newspaper and I was startled to see a crowd at the middle school bus stop, then I remembered it was sixth-grade orientation. I found it slightly amusing how many parents stayed until the bus came, being the jaded middle school parent I am now. It made me think how school was just around the corner, though. I honestly hadn’t been thinking much about it, and I’m usually counting down the days.

The Friday before Labor Day Beth came home early and we hit the road around 2:45 for Wheeling. The traffic was awful and getting out of the D.C. metro area took forever. It was around 10:15 when we finally pulled into YaYa’s condominium parking lot— the drive usually takes five to six hours. We did stop for dinner in Cumberland, at a restaurant in a converted mansion that once served as a joint Union-Confederate hospital during the Civil War. There’s dining on at least three levels and the back stairways and narrow halls that connect dining rooms, kitchens, and restrooms are a crazy warren. We were eating in the brick-lined “pizza cellar.” We eschewed the chance to have pickles or penne on our pizza, going for the more staid mushrooms and spinach instead. We got the fried eggplant appetizer, as well, because we’d only had eggplant twice in the week before.

When we got to YaYa’s she was out at a season preview event at a community theater, but North was still up and making chamomile tea. (North had attended the event, too, but Beth’s aunt Carole brought them home because YaYa had volunteered to help clean up afterward.) I was tired—I haven’t been sleeping well recently—and went straight to bed, but Beth and North waited up for YaYa.

Saturday morning we went to Target to buy school supplies and some more clothes and had lunch out at a restaurant where you can get French fries inside your sandwich. Not having grown up with this delicacy, I didn’t see the appeal, but Beth did so she indulged. That’s how it is sometimes with food. We went to Oglebay Park pool in the afternoon and then up to the lodge gift shop where YaYa bought some t-shirts for Beth. We had Mexican for dinner and while we were out, Carole texted she’d left something on the porch for us.  She and YaYa had spent the morning (and in Carole’s case the day) at a Labor symposium and there was a sheet cake with the faces of labor leaders in the frosting. She brought us a big slice of it with Walter Reuther (fourth President of the UAW and civil rights activist, born in Wheeling) pictured on it. Beth was really tickled by this. Carole came over and we had cake with sliced up Klondike bars and then we watched the beginning of Fantastic Mr. Fox. (YaYa moved recently from one condominium to another and now she lives two doors down from Carole. I think they are enjoying being neighbors.)

Sunday morning we went to YaYa and Carole’s church. It’s a small Unitarian church right over the West Virginia-Ohio border. They’re between ministers right now, so services are member-led. It was Carole’s turn. The service was Labor Day-themed and YaYa gave a talk about women in the labor movement and there was a discussion about it afterward.

After church, Beth helped her mom with some technical and mechanical issues around the house and North collected some water from YaYa’s pool in a bottle to bring to church next week. (They’re having a water service in which everyone brings water from a special place.) We left for home a little after two, and had much better luck with traffic. Even with a stop for dinner at a shopping center sushi place, we were home by eight-thirty.

We had a relaxing day at home on Labor Day, the last day before the new school year. Beth and North went grocery shopping and Beth worked on some home repairs and rested while listening to podcasts. I read the newspaper and wrote this and took a walk with North. As we approached the bridge over Long Branch creek, I asked North if there was anything they were looking forward to in the new school year, because they’ve been pretty negative about it. North guessed (correctly) that I was trying to get something positive out of them and if they didn’t come up with something I would. “So, fine, seeing my friends,” they said grudgingly. I decided to leave it at that. I remember eighth grade well enough to know it’s often no picnic.

But we did have a picnic that night because we do it every Memorial Day, Fourth of July, and Labor Day— I made veggie dogs, baked beans, corn on the cob, macaroni salad, potato salad, and watermelon. We ate it on the porch because it rained in the late afternoon and our patio chairs were wet. Afterward we went out for frozen yogurt, another last-night-of-summer-break tradition. As we were eating our frozen treats, another family was leaving and the dad said, “Another summer in the books.” And it was.

The next morning North made themselves a smoothie for breakfast and packed a lunch in their new bento box. (They’re always enthusiastic about breakfast and lunch preparation at the beginning of the school year.) They posed for the traditional first-day-of-school at the front gate and five minutes later they were at the bus stop, waiting for the bus for the first time as an eighth grader.

At 3:20 they were home and moderately cheerful. They have Zoë in two classes and the two of them are on the same lunch shift after having no classes together last year. North also got into art, which was their first-choice elective. They had a little bit of homework (of the introduce-yourself-to-the-teacher variety) in two classes, but nothing taxing.

Most years I’m chomping at the bit for the school year to start, or a little melancholy about summer ending, or most often a mix of the two. But my usual impatience has to do with having a quiet house to work in, and North was gone so much of August that I wasn’t as eager for it as I usually am. And all the family traditions, the picnic, the ice cream, the picture at the gate seem a little wrong without Noah here, but at the same time, they also seem right. I think that’s how tradition works, stitching us together and easing us through the transitions.