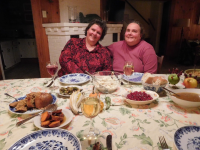 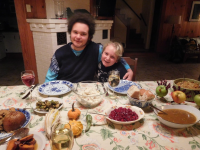 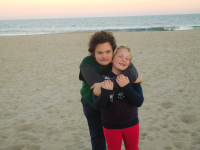 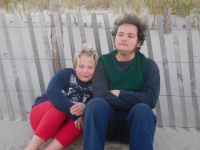 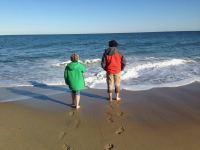 “Happy Thanksgiving Eve,” Beth said to me as she came back into the bedroom after her shower on Wednesday morning. I was still in bed looking at my phone.

“Happy Birthday Eve,” I responded. Beth’s birthday was on Thanksgiving this year and we were kind of stumped about when we should serve her cake. For breakfast on Thanksgiving morning, before we drove to Rehoboth for our Thanksgiving dinner and a weekend of Christmas shopping? As an afternoon snack when we arrived? I checked to see when her birthday had last fallen on Thanksgiving so I could consult my blog and see what we’d done, but, alas, it hadn’t happened since 2006 and I started writing this blog in 2007 so the answer was lost in the sands of time.

For this year, we settled on the night before Thanksgiving. I spent much of that afternoon cooking. With North’s help, I made a birthday cake for Beth, a chocolate layer cake with coffee frosting. I made the cake and North made the frosting and frosted it. After North consulted with Beth, they decorated it with chocolate jimmies and red sparkles. Their conversation went something like this, after North showed Beth the topping options and Beth chose the jimmies:

Later I asked, “Should we use the fancy platter” and North said, “Yes,” in an exasperated tone that clearly said, “Why can you never recognize your own best ideas?”

For Beth’s pre-birthday dinner, at her request, I made breaded tofu sticks, tater tots, and homemade applesauce. I also made cranberry sauce and brandied sweet potatoes for Thanksgiving and mixed a little of the cranberry sauce into the applesauce. After dinner, Beth took her shift in the kitchen, making stuffing and mushroom gravy.

In the morning, I made pumpkin-pecan muffins and served them with scrambled eggs, clementines, and vegetarian bacon and sausage. Before we ate, Beth opened her presents: fancy olive oil in a ceramic jug with multicolored stripes, a Christmas ornament shaped like a pierogi, and an assortment of dark chocolate bars.

We left for the beach around 10:30 and arrived at our rented beach cottage about four hours later—we had to make a lot of pit stops. We explored the house, admiring the charming alpine slope of the ceilings in the attic bedrooms and in the living room. Then we unpacked, made up the beds, and by 3:15 I was on the beach. Afternoons are short in late November so shadows were already long in the golden light. The waves that were tall enough not to be all foam were translucent at the tips. The angle of the sun hitting the sea spray was such that there was a tiny rainbow with almost every wave. Once I’d noticed a couple of them, I couldn’t stop seeing them. It was magical.

I took a long walk. At the south end of the boardwalk, where there are beach houses, I could smell wood smoke. In the middle, where it’s commercial, I could smell French fries, even though none of the food stalls was open. I guess that aroma lingers. At the north end, where the big hotels are, I smelled smoke again, presumably from the fireplaces in their lounges. The only business open was Victoria’s, the ground-level restaurant at the Boardwalk Plaza Hotel, where people were eating Thanksgiving dinner behind the big windows that face the boardwalk. I was not alone on the beach, far from it. I guess people were working up an appetite for their dinners.

Over the course of the weekend while on the beach, I’d see countless parents photographing their children dressed in everything from church clothes to Christmas pajamas, a bride and groom in full wedding regalia, and a group of a half-dozen middle-aged to elderly men releasing star-shaped balloons and embracing each other, which reminded me that on the other side of the country, my mom and a group of relatives were gathering this weekend to scatter my stepfather’s ashes in the Pacific Ocean.

Back at the house, Beth and I heated up the food we’d made at home, and she mashed potatoes and made a fire. We shared our gratitudes and ate. We are thankful for: each other, the beach, the fact that American democracy has not completely collapsed and all the people working to keep that from happening, smiles, cranberry sauce, and the Internet. We ate: vegetarian turkey, stuffing, mashed potatoes with mushroom gravy, Brussels sprouts, rolls, and cranberry sauce. After a break for dishwashing and digestion, we ate pumpkin and apple pie in front of a fire and watched A Charlie Brown Thanksgiving.

Before we went to sleep that night, I said, “Happy birthday,” to Beth and she said, “Happy Thanksgiving,” to me.

I am thankful for many things, of course, but top of mind is the fact that Beth was born the day before Thanksgiving fifty one years ago, that the beach is just a few hours away, that we can afford to go there two or three times a year, that we can afford to buy Christmas presents for each other and our loved ones, that Noah had much less homework than usual and so had some free time, that the weather was lovely all weekend, so sunny and mild that I spent hours roaming the beach and boardwalk every day for four days in a row, and for our family togetherness whether we’re collecting shells on the beach, singing at the annual sing-along and Christmas tree lighting on Rehoboth Avenue, browsing in the little downtown shops, eating at our favorite restaurants, or watching Christmas specials together in front of the fires that Beth and North built. (Saturday evening North lit one all by themselves.) That bond will get us through the hard things in life.

Of course, there are hard times and sad times and we don’t always have everything we’d like. North decided this year they are too old to sit on Santa’s lap in his little house on the boardwalk, but they couldn’t quite let go of the tradition completely, so they left a note in his mailbox. Inspired by that, I left my own anonymous note in the mailbox Sunday morning, asking for something dear to my heart but unlikely to happen—and no, it wasn’t Trump’s impeachment. It felt somehow therapeutic to leave the folded-up piece of notebook paper in the little metal box and walk away down the boardwalk.