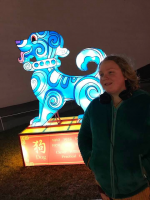 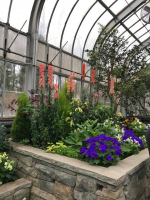 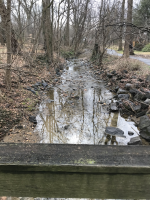 Saturday morning Beth, North, and I were talking about the collection of early February holidays that fell that weekend: Imbolc (Wiccan), Candlemas (Catholic), and Groundhog’s Day (secular) and about how they are all related to each other and mark the midpoint between the winter solstice and the spring equinox. It’s not spring, but a time to look forward to spring.

North was supposed to have Jade sleep over on Friday night but she was sick and had to cancel. (All three of us have been sick, too, with different symptoms, united only by a cough.) North and Jade had been planning an Imbolc ceremony, so North asked if Beth would do it with them. (On that particular day I was the sickest of the family and had retreated to bed.) There was music involved and maybe some kind of craft, though I never saw evidence of it. Finally, they left an offering of juice, milk, honey, grains, nuts, and bread on the porch.

And then two days later, the Groundhog predicted an early spring. My daffodils seem to agree. They are poking out of the ground and some of them have yellow-green heads formed. Now they sometimes stay stalled like that just a couple inches above the ground for several weeks at a time, but I’d welcome spring, whenever it wants to come. Still, I am also sorry for Beth, who loves snow and has had to make do with two measly snowfalls, both a half-inch or less. There was some patchy snow on the ground at Blackwater Falls State Park when we were there at Christmas, but it didn’t snow while we were there either. But here’s the thing—those tiny snowfalls resulted in one snow day, one early dismissal, and one two-hour delay, so I can’t quite find it in my heart to wish for any amount of snow. Still, as I reminded Beth, we’ve probably got a month and a half left in the snow danger opportunity season.

As we were discussing the dearth of snow at dinner Saturday night, North said it must make me happy and I said, “Can I really be happy when Beth is unhappy?”

And then North, who can sometimes get right to the point, said, “So you can’t be happy in winter no matter what?”

I hadn’t thought of it that way and I said, “Maybe not.” But on further thought I decided it wasn’t true. After all, I’m not always thinking about the weather. And even with a number of challenges to happiness (being sick, missing Noah, the continuing erosion of democracy exposed by the toothless impeachment trial), we still had some nice moments over the past couple weeks.

This past weekend I was mostly taking it easy and trying to recover from my flu-like illness. You can put that squarely in the not-happy-in-winter column. But the weekend before that, after North’s cold was mostly better and before Beth and I were felled, we did a lot of fun things. We welcomed the Year of the Rat by going to see Winter Lanterns, a celebration of the Lunar New Year outside the Kennedy Center. It featured a collection of over one hundred large colored lanterns in various shapes—traditional Chinese symbols like a dragon and pandas, all the signs of the Chinese zodiac, plus other animals, flowers, and mushrooms. It was gorgeous and we all enjoyed walking through the display. And Beth only said, “This would be better if there were snow,” once.

In addition to the lanterns, there were white lights outlining the branches of the willow trees that grow outside the Kennedy Center, and an art installation of metal poles with lights on them. If you connect two of them by touching both, they light up more brightly. It also works if two people each touch a pole and then hold hands. That was very cool. Plus there were food trucks, and we got a funnel cake for North and a Nutella-banana crepe, which Beth and I shared.

Saturday we went to see A Beautiful Day in the Neighborhood and on Sunday we went to Brookside Gardens, where we explored the warm and colorful conservatory, and then wandered on the outside paths. The landscape was mostly winter-bare, but I did spot snowdrops and some yellow acony. We walked through the labyrinth and tried to meditate, as the sign recommends, but the three little girls tearing through it soon after we started made that somewhat difficult. How can you be mad in a situation like that, though, when you’ve had your own small children? You can’t.

I wasn’t going to say anything about where North’s going to high school until it was settled, but it may not be settled for a while, so here’s an update, which goes in the ambiguous column. Those of you who don’t live in Montgomery County, Maryland probably need a refresher about this whole complicated process: There’s a lottery to determine which high school you’ll attend if you don’t end up in an application program. Everybody enters this, ranking five possible schools. If you choose your home school as your first choice, you are guaranteed a spot, but they still make you fill out the form. Then if you want to apply to a magnet, you do that, too. If you get in and accept, your lottery results are moot. North had entered the lottery and applied to the Visual Arts Center magnet last fall.

Sometime in early January, North got their lottery results and they got into their second choice school. They were a little disappointed but within a few hours they had started to convince themselves of the good points of this school, principally that it’s one of two high schools that their middle school feeds into (assuming you go to your home school) so they would be more likely to know people than at their first-choice school. Since they seemed to be talking themselves into being happy about this outcome I decided not to say anything about the second chance lottery. Yes, there’s a second chance lottery. Students who don’t get their first choice are allowed to throw their hats back into the ring after all the application program spots are filled and there are some vacancies at all the schools. But after several days of mulling it over, North decided they did want to enter the second chance lottery and they did. We’re supposed to hear back sometime in late March.

So then, on Friday, North heard from the Visual Arts Center magnet and they are waitlisted. The VAC expects to finalize the class by late April, so it could be almost three months before we know for sure where North is headed. But North’s genuinely happy to be on the waitlist because it’s very competitive and they didn’t expect to get in at all.

Monday I was still sick and I had a scattered, unproductive day. As a result, when North got home from school, I hadn’t taken my daily walk yet, so I asked if they’d like to take one with me. They said the crocuses were in bloom down by the creek and we should go there. Usually I’m the one who notices that and takes them there. Ever since North was tiny they’ve loved to walk on the muddy path by the creek when it’s lined on both sides with thousands of tiny purple flowers. It was kind of a sweet role reversal to have them take me. We even played Poohsticks after I mentioned how the little wooden bridge reminds me of that doing that when they were little. They did not actually remember playing this game, but once I explained it, they said, “Let’s play.”

So for a little while, instead of looking forward, to spring or to high school, we looked back.