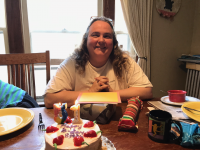 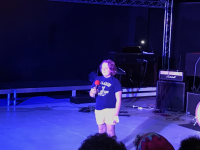 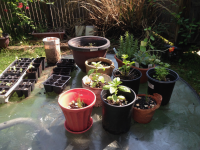 “I’ve never been to any part of this hospital other than the emergency room and neurology,” North noted on Thursday morning as we were walking through the corridors of Children’s National Hospital. It was true, we were in a different part of the hospital than the one where we go for the specialist we see about North’s migraines. We had an intake appointment with a doctor, a social worker, and some other staff members in the Gender Development Program. We were there all morning, filling out forms and talking to people. We’re getting into their system now in case we ever need their services. We also signed up to get on the email list for two support groups we may attend, one for trans and non-binary kids and one for their parents. We have a follow-up appointment scheduled for July.

After the appointment was over we dropped North off at school and Beth and I went out for a pre-birthday lunch at Arepas Pues in Silver Spring. It was very good. Beth says she is going to be craving the cilantro sauce that came with the tequeños (fried cheese sticks) because cilantro has that effect on her. Arepas Pues is next to Smoothie King and I remembered I had a frequent buyer card in my wallet I hadn’t used in years because I am not actually a frequent buyer at Smoothie King. But the card was full because I used to be a frequent buyer, back when both kids used to go to drama camp in Silver Spring every spring break and summer and we’d often go get smoothies after camp.

Well, when I tried to redeem the card for a free smoothie, the cashier looked at it like she’d never seen such a thing, then called another employee over, then talked to someone on the phone and the upshot was there was no free smoothie for me. I was mildly annoyed because even though they clearly don’t use these stamp cards any more (they have an app now) the card had no expiration date. It would have been pretty easy to give me a smoothie, but I didn’t make a fuss because I’ve been a young person working retail and I didn’t want to be that customer.

The next day was my birthday. Fifty-one is kind of an anti-climactic birthday, but it’s pleasing to me that now that Noah is seventeen and I’m fifty-one I’ve been a parent exactly one-third of my life. The day was pretty ordinary, at least until the evening. I sat on the porch and read a short story from this collection as well as the first few pages of Romeo and Juliet because I want to brush up on the play before I see it next weekend (North has a small part as a servant in the Capulet house). Then I finished ghost-writing a blog post on GMOs, exercised, and cleaned the kitchen. I had nice talks with both my sister and my mom on the phone.

When North got home from school I reminded them Beth was going to pick them up in a half hour for an appointment to get their braces off (the first phase is finished now and they have two years’ reprieve before the second phase) and then I left to go to Starbucks to redeem my birthday reward. Here I had better luck and successfully obtained a free iced strawberry-green tea and a couple cake pops.

When I got home North was gone but Noah was home, so we read Wolves of the Calla for almost an hour. We’ve been reading this book since January and we are tantalizingly close to the end, but I knew he’d be studying for AP exams all weekend and it was unlikely we’ll get to it again until next weekend. Then he practiced his bells and drums and Beth and North got back from the orthodontist with no braces and a new retainer and we all piled in the car to go to Highwood Theater.

It was Fine Arts Night, which is part preview for the two shows they have in production (Romeo and Julian and West Side Story) and part open mike night for the kids acting in these or previous Highwood shows. We had to drop North off for rehearsal at 6:30 but the event didn’t start until 8:00, so North while ate at home (a small pizza Beth picked up for them on the way home from the orthodontist), the rest of us had my birthday dinner of wood-fire oven baked pizza with eggplant and mushrooms and Greek salad on the patio of Pacci’s on a near perfect spring evening. We skipped dessert because we were going to have a red velvet-strawberry ice cream cake after the show.

The scenes from Romeo and Julian were the play prologue, the fight scene, and the balcony scene. The play was cast gender-blind and will be performed in modern clothes. Both leads are played by trans boys. I’m looking forward to seeing the whole thing on Friday. The kids in West Side Story did the scene in which Tony is convinced to come to the dance and the scene in which Maria sings, “I Feel Pretty.” Chances are we’ll go to that show, too, although North’s not in it. We pretty much go to all Highwood shows now because North always has friends in them.

Because kids come back to act in this student-based theater season after season, they get to know each other and they’re bonded. During the open mike part of the show, every single kid got thunderous applause from the other kids and many of them were enveloped in huge group hugs after they sang.  That’s what happened to North after they sang their original song “Guess What?” Beth said later it made her happy that North has found their people. Here’s how the song starts:

‘Cause it’s not in my light hair
Not in my blue eyes
Not in my fair skin
Not in my freckles
Not in my big feet
Or the way I hold my tongue
But in the way I sing
And have always sung
‘Cause music takes the bad parts out of everything
And somehow kind of picks and chooses for me
And I love it oh so much
When I need it, it’s my crutch
Music’s always there
For me.

The show was diverse with teens singing songs from musicals, an adorable boy of eight or nine singing “Movin’ Right Along,” from The Muppet Movie, a girl about the same age singing “Octopus’s Garden” and accompanying herself on the ukulele, and a band of high school students that focused on classic rock (Pink Floyd, Toto, and Talking Heads). The teenage girl who sang “Hold the Line,” really rocked it.

The show was a lot of fun, but it was also long, about two hours instead of the one hour we were expecting. I was thinking I might rather delay my cake and presents until the next day (as Noah had the week before) rather than rushing through them at the end of a long day. I still wanted to pick up the cake, though, because Cold Stone was right around the corner, and it seemed silly to go make Beth go back to Silver Spring the next day.

Well, Cold Stone is open after ten on a Friday night, but thinking back to my own days as a Baskin Robbins employee one summer in college, I might have realized this isn’t the best time to pick up a cake. The staff was busy and unprepared for what I assumed would be a simple transaction. (I was in the store alone while Beth and the kids waited in the car.) I thought just giving them Beth’s last name would be enough but apparently there were a lot of cakes in the back and they didn’t have names on them. And because I hadn’t ordered the cake I didn’t know what size it was or if she’d ordered lettering. I said it might say, “Happy Birthday, Steph,” thinking that might narrow things down, but there was no such cake. (I later learned it just said “Happy Birthday.”) Employees kept coming to talk to me and wandering off and then new ones would come. Eventually Beth texted me the receipt and I thought that would help but it didn’t. Finally, they just took a cake from the display freezer and wrote “Happy B-day, Steph” on it right there and then and I was free to leave. It was ten-thirty by the time we got home and everyone went to bed, with no cake.

We had the cake after lunch the next day, after I organized a campaign to get everyone to finish their lunches by 12:15 (because North had to leave for rehearsal at 12:45). I opened my presents—an umbrella, headphones, a promise to get my Birkenstocks resoled and to buy Stephen King’s new book The Outsider when it comes out later this month. Earlier I’d received a Starbucks card from my mom and a card telling me Beth’s mom had a tree planted in my name in a national forest. I was very happy with the gifts. Beth’s card said “Have Your Cake and Eat It, Too,” which I thought was funny given the trouble we’d had with the cake.

The next day was Mother’s Day so there were more gifts. Beth got a pink carnation at the supermarket, where they were giving them away to moms. The kids got Beth some treats—a dark chocolate bar and a bag of chocolate wafer cookies. I got another Starbucks card from Noah and a little herb garden in a pot from North. It has oregano, rosemary, sage, thyme, and nasturtiums. It was a thoughtful gift, as I’d been saying I thought I’d focus the garden on herbs and flowers this year because I’m tired of squirrels, rabbits, and deer eating our vegetables and melons. I already had basil, chives, cilantro, and parsley in various stages, so this makes a nice assortment. (And because I can’t stop myself sometimes, I do have some lettuce plants in the ground already and cucumber seeds planted in starter pots. And when North brought kale seeds home from church on Mother’s Day, I planted some of those, too, though I’m saving most of them for a fall crop.)

We’re near the end of a busy week for both kids. Noah took four AP exams—in Biology, Calculus BC, English Language and Composition, and World History. He just took the last one this morning. It’s tech week for Romeo and Julian, which means North has had rehearsal until ten o’clock on Monday, Wednesday, and tonight and then the show runs from Friday to Sunday, three evening shows and two matinees.

North also got to go to a ceremony at school honoring kids who were on the honor roll and/or got straight As third quarter. It was their first time getting straight As so that was exciting. And then they were nominated by their chorus teacher to join the Tri-M Music Honor Society and that was even more exciting. Finally, after an article in the school magazine in which North was interviewed about why separating boys and girls in gym class was problematic for non-binary kids, their gym teacher started having them do their pacer tests all together. North is proud to have made a difference. And we’re proud, too.

Life seems full these days, in a good way. I’m appreciating this more keenly because early spring—from early March to mid-April or so—was a hard, out-of-sorts time for me. Now it’s better. It’s like I have my cake and I’m eating it, too.