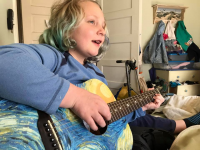 I think I’ve failed to mention here that June broke her ankle again. That actually happened around three weeks ago, at basketball practice. She got knocked over during a scrimmage and re-broke the growth plate of her right fibula, right where she broke it in October. She got a new boot and was getting around okay until her left foot started to bother her. We assumed it was strained from walking with the boot but about a week and a half ago the pain got worse and then she couldn’t walk at all. Beth took her to urgent care and they x-rayed that foot. It wasn’t broken, but she was rendered immobile.

We took her to the end-of-season Panda party (hosted as usual by Talia’s family) because she begged to go, and we all ended up having a good time. June held court from her chair and when the girls wanted to go outside and run around, we helped her to a bench, where she could sit and watch. I think she might have been giving out clues in some kind of mystery game they invented.

She stayed home from school Monday and Tuesday there was no school because of a weather event. We got three inches of the white stuff. It was the first school cancellation of the year and it was unlikely June would have gone to school that day anyway so I couldn’t be too grouchy about it. It was kind of sad, though, because June was too hurt to go play outside and while I might have been able to convince Noah to take June sledding if she’d been able-bodied, he wasn’t going to do it alone, so everyone just stayed inside. I ghost wrote a blog post on apple cider vinegar and Noah worked on a research paper. (I did make hot chocolate for the kids and brownies that evening because Beth was in the mood, so I was not a completely inadequate winter mother and wife).

Megan came over for a play date and as June was bed-ridden, they decided to play hospital. Soon June’s room was supplied with an EKG graph, an IV line, and other medical accoutrement.

That night right before I got into the shower, June, who was in bed but not asleep, started complaining of dizziness. Beth said she’d come back and check on her in a little bit. When I got out of the shower, June was sobbing. The dizziness had worsened and she was seeing double. When June cried, “I can’t move my hands!” Beth said, “Call 911,” and I did.

Soon there were three paramedics in June’s bedroom. (I wondered later if they noticed the prescient medical décor.) They did a good job calming her down so she stopped hyperventilating and after asking some questions, they carried her out to the ambulance waiting in front of our house. I rode with her to the hospital and Beth and Noah followed in the car. I was grateful it hadn’t happened the night before when the streets were slushy.

We had to wait a little while in the ER, which Beth said was a good sign, that they weren’t taking her right away. Eventually, June got signed in. Beth and I could go with her to the exam room, but Noah had to stay behind. During a lull in all the tests, Beth drove him back home so he could get some sleep.

Over the course of the night, we saw many, many medical professionals and nearly everyone was truly kind, caring, and reassuring. (Over and over we had to say we were both June’s mothers and I thought how not very long ago, this would have been harder than it was for us. We were even in a Catholic hospital and it was a non-issue.)

June had an EKG, a CT scan, and an MRI, plus blood work. Everything was normal and her blood pressure, which had risen into the 140s over the 90s, probably from stress, also returned to normal. So, we knew she didn’t have a skull fracture, blood on her brain, or a brain tumor. (No one said anything about what they were looking for until they knew it wasn’t an issue, which I kind of appreciated, but of course Beth and I were both already thinking brain tumor, and not saying it to each other either.) However, despite all these tests, June still had all the symptoms that brought her to the hospital.

Around four in the morning, they transferred us to Children’s Medical Center, so June could see a pediatric neurologist. I rode in the ambulance again and Beth drove. It was eerie driving along familiar streets in downtown Silver Spring and D.C. in the dead of night. I was surprised how much traffic there was along Georgia Avenue, even though nothing but gas stations was open. The driver was kind of chatty so I asked him if he always worked nights. He said yes. I told him it was only my third time staying up all night and the first two times I was in labor.

All night June had been staying calm, putting up with new and scary tests and getting pricked with needles multiple times. She had an IV of saline at the first hospital and then another one with more saline and migraine medication at the second hospital. But soon after arriving at Children’s, she lost her resilience. She was crying and saying she just wanted it to be over and to go home. (I might have lost my composure earlier in the ordeal than she did.) One difficulty was that the IV fluids made her need to use the bathroom urgently and because she couldn’t walk and she couldn’t go in a bedpan, we had to get her unhooked and take her there in a wheelchair every time and this meant she was often uncomfortable because had to wait until someone could disconnect her IV.

But the second IV drip started to relieve some of her symptoms. She gradually re-gained the ability to move her fingers and toes and her hands warmed up. (They’d been ice cold earlier.)  The pauses between visits from medical professionals started to get longer and around 6:15 June fell asleep on her gurney and slept there most of the morning whenever she wasn’t being examined. Beth and I dozed off in our plastic chairs as well. I slept around forty-five minutes in two pieces.

When we got a diagnosis, it was complications of a migraine. It was a little surprising because although she did have a headache it wasn’t severe and it lasted all night, unlike her normal headaches, which are intense and relatively short-lived. But when June was first diagnosed with migraine-like headaches three years ago they told us the pattern could change around puberty and she is almost eleven.  They gave us a prescription for high-dose ibuprofen and a reference for an outpatient neurological consultation.

June was discharged a little after noon, improved but still a little dizzy and seeing double. The three of us slept all afternoon. When I woke up, I made a kale, potato, and mushroom soup because eating something nourishing seemed appealing.

June still couldn’t walk and I thought she could use another day to recover, so she stayed home Thursday. But I had a long phone conversation with the school nurse about everything that had happened over the past week and secured permission for June to use the health center’s wheelchair, which allowed her to return to school Friday.

I also tried to get her Saturday morning guitar lesson—have I mentioned she’s taking guitar?— moved off site because her music school is on the second floor of a building with no elevator. (They are expanding into a more accessible space eventually but it’s not ready.) We’d had to cancel her lesson the weekend before because of the stairs and I was on a mission to return her life to as close to normal as possible. I failed here, though, because they can’t do lessons outside the building for insurance reasons. So June practiced at home.

We have an appointment with a physical therapist on Monday and an orthopedist on Tuesday. Our neurologist appointment isn’t until May but they said if they get a cancellation they’ll see us earlier. We’re hoping soon June will be better from head to toe.

I’ll give Beth the last word. This is what she said on Facebook, on Wednesday: “I am grateful to have so many well-trained and caring health care professionals within a few miles of our house. I am grateful to have a job with good health insurance so that I didn’t even hesitate to take her to the hospital. I am more committed than ever to fighting to preserve the gains we’ve made in providing affordable health care to people living in the United States and look forward to the day when we make universal health care a reality.”