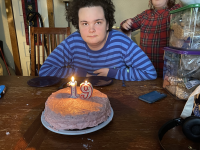 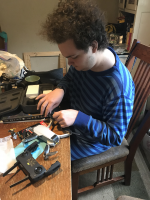 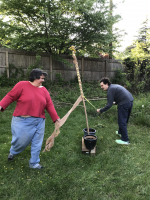 So, back in the Before Times, we thought it was sad Noah would be at school for his nineteenth birthday and we were wondering whether to order him a cake from a local bakery or if it would be better to have the cake late, but at home, where we could all partake. So, that’s a decision we won’t have to make until next spring. (He’ll be at school a year from now, right?)

Instead we had another quarantined birthday to celebrate. We started two days early, on Friday when we were ordering takeout pizza and Beth offered to let him pick the restaurant, since it was almost his birthday. He chose Mama Lucia. We ate at the backyard table, right before we walked around the Maypole.

I guess I should back up a little here. It was May Day (Beltane) and North is celebrating the Wiccan holidays these days. The night before Beltane was their night to cook, so they made a meal of traditional Beltane foods—bread with honey butter, onion and goat cheese tarts, and strawberries. They also wanted to make a Maypole. They weren’t sure if they could entice any of the rest of the family to actually dance around it so they asked if we’d walk around it and we all consented. Beth helped construct the pole, by chopping down a weed tree from the back of the yard and making a garland of buttercups to top it.

After a leisurely dinner of garlic knots, fried mozzarella, sautéed spinach, and pizza, North played a Beltane song about the May Lord and the May Lady on their phone and we took turns walking around the pole and wrapping the ribbons around it. It was fun.

We ate in the yard again the next night. We often get Thai the night before Noah’s birthday because Beth and I went out for Thai the night before he was born, three weeks early. We told the story he’s heard many times—how it was the last day of classes that semester and I went to the obstetrician later in the day and he said, “This baby’s not coming any time soon,” and I thought that was good, because I had a pile of final papers to grade. Beth and I had dinner on the balcony of a Thai restaurant near our apartment in the city. (A crowded little balcony, close to other people! The mind reels.) That night, around eleven-thirty, my water broke. When I mentioned we were in bed but hadn’t yet fallen asleep, North exclaimed at us being up so late. It’s true, we used to go to bed at eleven or later, which would be quite a late night for us now. Noah was born around six o’clock the following evening. I graded some of the papers in the hospital.

On Sunday, Beth went grocery shopping early in the morning to avoid the crowds, as is her wont these days. She was out the door before anyone else was out of bed. It was a successful run; she found tofu and Noah’s preferred brand of pasta sauce, both of which have been scarce lately. Because he asked, we’re having pasta for dinner all next week, so we needed the sauce. Beth said it was “a birthday miracle” for Noah.

After she’d returned, I’d put the groceries away, and Noah had eaten breakfast, he opened presents. He got a book called Cinemaps, which consists of maps of the sets of thirty-five movies, with color-coded lines showing where each character goes over the course of the movie. North chose it for him and it’s really cool. He also got an Amazon gift card, an iPad cover, and his big present—a camera drone.

He has more presents coming. Some of his gifts from relatives haven’t arrived. And due to a miscommunication, I only discovered he had a wish list of books two days before his birthday, so none of the ones I ordered arrived on time, but I’d been wanting to buy him books and I went a little crazy and ordered seven novels for him. Finally, he left all his summer clothes and pajamas at school when he thought he was leaving for a week (way back in early March). He has a bunch of t-shirts he left  at home when he left for college and we bought him shorts already, but he still needed short pajamas. There’s a certain brand he likes (and he owns five pairs—all at school) so I was waiting to see if we could possibly get up to Ithaca before it gets hot here. But right before his birthday we found out the date students can come collect their belongings from dorms has been pushed back from mid-May to sometime in June at the earliest. So I ordered two pairs of pajamas to tide him over.

Over the course of the day, the birthday boy talked to my mom, Facetimed with Beth’s mom, watched Portlandia with North and The Magicians with me, and then I read the last twenty-five pages of A Gentleman in Moscow to him. (We agreed to wait for his birthday books to begin arriving until we start a new book, unless nothing gets here by next weekend.) Then he completed a short online training so he could be licensed to fly a drone.

It turns out you can’t legally fly a drone within fifteen miles of Washington, DC, for security reasons, and we live a mile or two from the border, so Beth had to research where you can fly a drone near here. She located a park near Gaithersburg with a dedicated field, but by that time it was mid-afternoon and she was busy making his birthday cake (chocolate with strawberry frosting) and birthday dinner (spinach lasagna), and he wanted to watch a movie after dinner so we decided to go next weekend. We haven’t left the house to go anywhere except to go for short walks around the neighborhood, to the grocery store, or to run other household errands since late March, so driving out to a field to watch Noah try out his drone seems pretty darn exciting. I just hope it’s not too crowded, so we can stay.

Noah asked if he could pick a movie to watch without North getting veto power over it (as they have different taste in films, with just a little overlap) and we said yes. He chose Inception and we watched most of it. We’re going to finish it tonight.

It’s possible a day at home watching television and movies, and reading, and eating lasagna and cake and ice cream is close to the birthday Noah would have chosen for himself. He’s more of a homebody than his sibling and easy to please. It was nice to have him home today and not to have to be separated from him on his birthday for the first time. But it’s like what I told him a few weeks ago, when we were dyeing Easter eggs. “It’s nice to have you home for this and I hope next year you’re not here.”