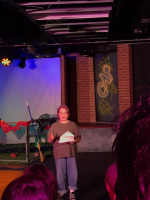 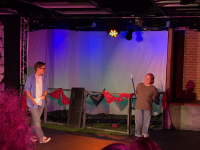 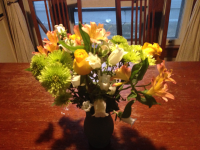 Romeo and Julian just finished its three-day run. Opening night was Friday and then there were two shows each on Saturday and Sunday. Between tech week and the performances, North was getting to bed at least two hours past bedtime every day but one for a solid week and Beth and I were up past bedtime almost all week, too. I was reminded how during tech week for School of Rock in December, I was thinking we would never ever do this again. (And then after the run was over, I realized North had loved it so much that we had to do it again, though we did skip the March shows.)

North slept later than usual most mornings and napped one afternoon before rehearsal, but they weren’t late to school even once, even though I said I’d be fine with that. They were headachy in the afternoons twice, which I thought could be related to sleep deprivation, but they fended it off with painkiller, hydration, and rest and it never turned into a full-blown migraine. (North has gotten pretty good at detecting and preventing incipient migraines this year.)

One rainy morning I found them sitting on the porch steps waiting for the school bus (it stops right in front of our house, so sometimes when it rains North waits on the porch instead of at the stop). They were eating tortilla chips. “Is that all you’ve had to eat?” I asked and they nodded tiredly.

I went back inside thinking if they couldn’t be well rested, they could at least be better nourished, so I brought them a mug of water and some strawberries for starters and then went inside to see if I could melt some cheddar cheese over leftover kidney beans (a concoction North especially likes) before the bus came. I got the cheese melted to the exact consistency they like but when I brought it outside, North and the school bus were gone.

North took the Ride-On bus to rehearsal by themselves all week. (Last fall I went with them on the bus to School of Rock rehearsals because it dark in the late afternoons back then.) On Monday, after a month and a half of doing this, they had a bad experience. They were harassed by two older boys on the bus, which was the first time anything like that has happened to them. It didn’t escalate, but it was scary, both for them and for us.

Beth and I gave advice—sit close to the driver or to an adult woman—but it sucks to have tell your twelve-year-old how to minimize the chance of being a target of men and boys. I was a couple years older than that before I was ever harassed, so I wasn’t really expecting it so soon, but the only positive thing about it was that thanks to #MeToo, we’ve had these conversations already, more than once, and North knows it’s one of the hazards of existing in public space as a person who’s not a cis boy or man. There was no rehearsal the next day and on Wednesday I offered to go with them on the bus in case the same boys were there, but North said no, so with some trepidation I let them go alone and they didn’t see those boys for the rest of the week.

It reminded me of something else that happened to them for the first time this month. They helped organize their school’s Day of Silence for LGBT+ issues. Because they weren’t speaking and had the cards explaining why, some kids in the hall asked if they were in “the faggot group.” I wasn’t called that (or more often “dyke”) by passers-by until I was twenty. Sometimes it seems the world is getting worse, even when I know that in this case, it’s just a case of kids being out earlier, which is happening precisely because the world is getting better.

And speaking of Rainbow Alliance, while also getting back to the play—I think this is a post about the play—on Thursday, they stayed after school for a Rainbow Alliance meeting. I knew getting home on a bus, eating dinner, and getting on another bus to rehearsal would be tight, but we’d successfully managed this maneuver a couple times earlier this year so I thought it would be okay.

Well, North had the worst combination of bus luck. The 12 they needed to take from school to home was late. We’d been texting so I knew and I’d packed dinner for them to take to the theater. They just needed to get home, grab it and go. They got home just in the nick of time, with knees scraped and bleeding from running and falling on the way from the 12 stop to our house. I cleaned them quickly and because I was talking to them, I accompanied them to the 17 stop so we could continue the conversation. We were turned toward each other and not looking at the street when the bus, several minutes early, sped by the stop without stopping, because no one had stepped to the curb. (More than one line stops there, so you have to signal to the driver.)

North, who had been stressed for almost an hour about catching this bus, burst into tears. I hugged them and told them to come inside and have some of the tomato-rice soup I’d made earlier than I usually make dinner so they could have a hot meal before rehearsal.  I thought they might as well as there was no chance of them getting there on time now. They ate—both the soup and the cold supper I’d packed—I did a more thorough job cleaning and bandaging their knees, emailed the theater director to say North would be late, and then I sent them back outside, ten minutes before the next 17 was due and instructed them not to take their eyes off the street.

I watched them get on it from inside the house and almost immediately after that, I got a text from Beth who wanted to know if I was at the meeting at North’s school about the trip to Madrid the seventh and eighth-graders in the Spanish immersion program will go on next year. I wasn’t there and neither was she. Despite putting it on both our electronic and paper calendars, we’d both forgotten about it. Meanwhile, it was one of those nights it was clear from the time he got home that there was no way Noah could finish his homework (and he didn’t, but he was only thirty pages of reading short when he went to bed). It was just one of those star-crossed days.

Performance: The Two (And a Half) Hours’ Traffic of Our Stage

On Friday, North, fed and freshly showered, caught their bus for their five p.m. call time. I was relieved their departure went smoothly so they wouldn’t arrive rattled. Beth got home around six-twenty and Beth, Noah, and I went out for pre-show pizza in Silver Spring, picking up a bouquet of yellow roses and speckled lilies on the way.

North had mentioned they kept missing their cues in rehearsal, which I thought was strange, as it’s not a problem they’ve had in other plays, but it was still happening as late as the last rehearsal on Thursday night. I was thinking about this nervously as we took our seats in the theater. I needn’t have. They missed no cues, they knew their lines, they were comically expressive as the Capulet’s servant, Peter. North has pointed out to us (and to their English teacher during a class discussion of Romeo and Juliet) that it’s Peter, who in inviting Romeo to the party where he meets Juliet, sets the whole play into motion. “Without him, there’s no play,” North says authoritatively.

As I mentioned earlier, this was a modern-dress, gender-blind production. Both leads were played by trans boys. The language of the play was unaltered, except for gendered language, so both Romeo and Julian call each other, “my lord,” etc. They also made the two leads a bit older, both in their late teens instead of thirteen and sixteen. But the plot is the same, which calls attention to all the gendered assumptions in it. Why, for instance, is Romeo free to wander around Verona with his friends, stay out all night, and get into brawls while Julian can leave his house only to go to confession, has no friends, and is being married off against his will? Free-range parenting versus helicopter parenting?

The play was also slightly abbreviated, the comic relief scene after Julian’s fake death in the fourth act is cut (too bad for North because Peter figures prominently in it) as is almost all of the fifth act after Julian’s real death. Even so, the play lasted two hours and forty minutes, including intermission, not the two hours the prologue promises, so I can’t really complain about the cuts. It was quite a late night already.

Over the weekend, Beth and I both tried to catch up on our sleep. Beth, who gets up earlier than me on weekdays and was run ragged from picking North up from late-night Tech Week rehearsals and the shows, slept late on Saturday and then took a long nap Saturday afternoon. I took a nap Saturday, too. No one felt up to cooking, so we used a gift certificate Beth had for the Cheesecake Factory on Saturday and we got Burmese takeout on Sunday. We did manage to summon the energy for mowing and other yard work, because it’s May and it’s been rainy and everything’s growing like crazy.

North was at the theater from 11:30 in the morning to 11:00 p.m. on Saturday and until 10:00 p.m. on Sunday, so we barely saw them. But in the little sliver of time we did, we heard that on Saturday night, North’s friends Leila and Morgan and Leila’s mom came to see the show. North is always excited to have friends in the audience so they were happy to see them afterward. When Beth picked them up that night, she let North linger long enough to get a root beer float at the concession stand because she’d given them money to get one between shows but the actors weren’t allowed to visit the stand until after the second show. This was also a consolation prize because some of the actors were going out to a diner for pancakes after the show and North wanted to go, but this proposal (going out at eleven o’clock at night with mostly older kids and possibly no adults—that part was never clear) was met with a hard no.

When North came home after the Sunday shows, they said the closing night audience was the best audience of all five. They laughed at more of the jokes and clapped harder. In fact, North said there was applause when they exited the stage after their biggest scene in the first act and because it wasn’t the end of the scene, they surmised, “They were clapping for me.” I was glad to hear the show ended on an positive note.

On Monday I was meeting Beth in the city for event (her office reserved a theater for a showing of the documentary RBG) so I left shortly after the kids got home from school. Before I went, I asked North how they felt about the show being over and they said it was sad, but they were glad to have a free afternoon. That’s kind of a novelty and before you know it, it will be summer and North will be rehearsing for My Fair Lady.