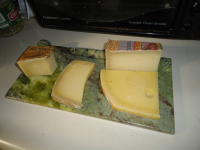 I’d give up provolone-y
If you would have it so
If you’d give me a kiss please, then swiss cheese I’d forgo
A Philadelphia cream, I need no longer dream
For I love you more than cheese.

From “I Love You More Than Cheese” by Sandra Boynton

On Sunday evening I was reading my email and noticed I had a message from the Grey Squirrel’s mom. We’d been talking about setting up a play date at the Squirrel’s house for a while and she was proposing Wednesday morning. She could pick June up, take her back to her house to play with the Squirrel, and then drop off both girls at school when she picked up her son (who’s in the morning class there).

“That would be perfect,” I replied. “Wednesday is my birthday!” All of a sudden I was looking at six hours of kid-free time. I wondered what to do with it. It occurred to me that I had a coupon for a free drink at Starbucks and that Cake Love (http://www.cakelove.com/locations_silverspring.php) will give you a free cupcake on your birthday and that there’s a Starbucks and a Cake Love right around the corner from each other in downtown Silver Spring. I’m usually nervous about getting too far away from home during June’s school day, afraid I might miss a bus, get stranded and miss pickup, but with six hours, I felt comfortable trying it.

Actually I felt comfortable with four and I wanted to be there around lunchtime, so I puttered around the house for two hours after the Squirrel’s mom fetched June, messing around online (a lot) and straightening up the house (a little). I was at the bus stop at eleven, and in Silver Spring by eleven-thirty. I picked up my cupcake (lemon swirl), and wandered into Border’s to look for a couple books I’d seen favorably reviewed on a blog I read, but despite the assistance of their computer system and a salesclerk, I couldn’t find either. (Digression: Doesn’t it drive you crazy when the computer at Border’s tells you the book you want is “likely in store” and then suggests a few possible sections where it might be shelved? If they’re going to bother with a computer tracking system, why can’t it direct you with certainty and precision? It’s like interacting with a cheerful, well-meaning passerby who doesn’t really know much about the store.)

My next stop was Lebanese Taverna (http://www.lebanesetaverna.com/), where I ordered an a la carte lunch (two pieces of falafel and two little pies, one spinach and one cheese). I think when June’s in kindergarten there’s a danger I will develop the habit of lunching out alone and spend all together too much money on it. There’s something deliciously decadent about reading a magazine while eating a meal someone else prepares for you.

From there I progressed to Starbucks. I still had the cupcake and I had every intention of getting an iced latte to go with it, but then the frappuchino poster spoke to me and I ended up with a coconut mocha frap. I put the cupcake in my backpack for later. I have a wicked sweet tooth, but even I wouldn’t have a cupcake and a milkshake by another name in one sitting. I sat outside, sipping the frap and reading Mark Twain short stories (I’d finished the Post magazine at lunch). I finished three stories, checked my watch (just after one) and headed for the bus stop, where I read one more story (they’re short) before the bus came. It was one-thirty when I got home. I messed around some more online, exercised and left to get June. It’s amazing how fast 8:50 to 2:45 can zip past you.

Noah got home around four-thirty, and to my relief, he had very little homework. I am liking the fourth quarter so far. The long-term project is a puppet show. The kids have to research the topic (Noah’s group is doing animals in a coral reef), write the show, make the puppets and scenery and perform it, but the best thing of all is that they are doing nearly all of the work at school. He still has math or writing homework to do every so often, but frequently he has nothing to do but practice percussion and this was one of those days. I’d been banking on that when I requested dinner out at Austin Grill (http://www.austingrill.com/silverspring.html). The last meeting of my book club was at 7:30 so going out was ambitious even without worrying about Noah’s homework.

When Beth got home early at 5:15, Noah was more or less ready for the festivities (except he’d forgotten to print my birthday card and his shoes were missing in action). I’d suggested taking the presents to the restaurant, but Noah wanted me to open my presents at home. The reason, it turned out, was that there was a song he wanted to play while I opened his present, “I Love You More Than Cheese,” from Sandra Boynton’s marvelous CD Rhinoceros Tap. Do you want to hear a cartoon mouse sing this song on YouTube? Of course you do. Go ahead, I’ll wait (http://www.youtube.com/watch?v=lCgk3RhrKFI). It was a hint, as was the inside of his card, which featured a mouse, saying, “More cheese!” The gift was a duplicate set of the cheeses I received for Mother’s Day: Comté, Emmentaler, Gruyére and Rothkase, all imported from the Alps. (They were freebies, due to an error on the part of the catalog, but I’m a fan a cheese, so I’m not complaining.)

I also got two CDs (Paul Simon’s and k.d. lang’s latest ones), a pencil case, a shirt, a Starbucks gift card and a tree planted for me in a national park. Oh, and a bottle of cinnamon. That last one was from June and she was very insistent about it, according to Beth. She thinks I will sprinkle it on my tea, and I suppose I will, at least once, to make her happy, though cinnamon sticks might have worked better for this purpose.

Next we drove back to downtown Silver Spring and had dinner outside, near the fountain on a warm spring evening. There was a half moon up in the blue sky and Beth said it was “a beautiful evening” to spend with her “beautiful family.”

The strawberry lemonade at Austin Grill is downright addictive. When I took my first sip, I admitted to Beth, “This is why I wanted to come here.”

“Our work is done,” she said, but nonetheless we ate our dinner (PB&J, black beans and rice and corn on the cob for the kids, a corn and chili soup for me and a plate of spinach and cheese enchiladas that Beth and I split.) The soup was very tasty and both kids deigned to eat the corn, which came slightly blackened from the grill, much to their surprise. I praised them for being flexible at the end of the meal.

It was almost 7:15 when we got home, so we decided to eat birthday cake in shifts. The kids would have some at snack time and Beth and I would have ours when I got back from the book club. She drove me to the rec center and headed back home to put the kids through their evening routine while I discussed Bleak House with adults. They’re more than just adults actually—at least half the members of the book club are senior citizens, so forty-four was feeling pretty youthful. I have really enjoyed meeting with these folks every other week since the end of March to enter into the imaginative world of Dickens’ version of nineteenth-century England. Although my graduate training has stuck with me to the extent that I could probably never utter the phrase “universal truths” in earnest, I find the fact that they do a refreshing change.

After I finished the novel last week, I spent more time than I want to admit digging through piles of dusty old papers in the basement, looking for the essay I wrote on Bleak House my first semester of college. I found it and it was worth the search. I have to say I was impressed with my eighteen-year-old self and I half suspect she was smarter than I am now, or at the very least that she had the mental focus to read more carefully than I do now. In any event, though I listened more than I spoke at book club, I worked the thesis of the paper into the discussion and was possibly more gratified than a truly modest person would be to hear a little silence fall over the table, followed by a few people quietly saying, “Oh, yes” and “I hadn’t thought of that.”

I had to wait a while for a bus, so it was 9:25 when I got home, and Beth and I sat down to eat our slices of lemon-raspberry cake from the Firehook bakery near her office (http://www.firehook.com/e-com/index.cfm). It was a sweet ending to a lovely day, full of treats and a surprising amount of cheese. From the Lebanese cheese pie, to the imported European cheeses Noah got me, to the Tex-Mex enchiladas, I ate well. But more than all the desserts and all the cheese, I appreciated the nice mix of alone time, family time and adult time. That was probably the most nourishing aspect of my day.