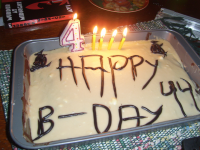 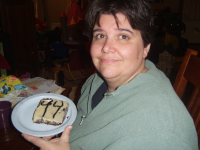 There were no surprises on Beth’s birthday yesterday. I renewed her subscription to Brain Child (http://www.brainchildmag.com/), which I do every year on her birthday unless I got a two-year subscription the year before. Noah selected and helped pay for a two-bowl baking set to replace Beth’s favorite mixing bowl, which he broke last month. We got it from a Fiesta Ware factory in West Virginia (http://www.fiestafactorydirect.com/) to support the economy of her home state and because the other bowl was made by a West Virginian potter. I suggested blue, which is Beth’s favorite color, or red or orange because those are fall colors and it might remind her of getting them on her birthday, but Noah thought the bowls should be brown, because the original one was brown so we got chocolate brown.

Overall, I thought it was a pretty good gift idea and it might have even stayed a surprise if I hadn’t let June pick out her gift at the same time. She saw us browsing through the website and wanted to pick something, too and I thought it would be a good opportunity for both kids to have Beth’s birthday covered. I gave her some choices, including a mug with fall leaves on it and she went with a purple mug (I couldn’t get anyone on board with the fall colors theme). Soon after June told Beth she was going to give her some hints about her present. The hints went something like this: “It’s purple and it has a handle and you can drink out of it and it’s called a mug.” Somehow, Beth put two and two together on that one, and as a result, she also realized what Noah and I must have been up to on a ceramics website. Later June regretted having given away so much, and Beth said she’d probably forget what the gifts were anyway.

Then, just so there would be at least a little surprise, because I do like surprises, I picked up a dark chocolate and espresso candy bar at the Co-op, which I accidentally left on the kitchen counter in its bag. Beth found it while she was clearing off the counter a few days before her birthday. After that, I gave up. I even left the cookbook open to her birthday cake recipe (chocolate with coffee frosting) while I was putting ingredients for it on the shopping list.

So, no surprises. But that’s okay. June and I spent a pleasant morning yesterday wrapping gifts and baking the cake. I let her pick out the wrapping paper (an animal print for the mug and branches with red berries for the bowls). She helped measure ingredients and mix the batter and the frosting.

I went to the library while June was at school to get a book Noah needed for a research project on Germany and when I got off the bus in front of our house I smelled smoke. I had a moment’s panic, thinking I had not turned off the oven before we left and that the cake I’d left in there to cool would be burned into a brick and the house filled with smoke. But when I crossed the street and opened the front door, all I smelled was chocolate. Sometimes it’s good not to be surprised.

I had enough time for lunch and a longer than usual ride on the exercise bike since I didn’t expect to have much time to exercise over the holiday weekend. Then I headed back to school to collect June. In the parking lot, she told the Ground Beetle’s dad, “It’s my other mommy’s birthday!” He asked what she got for Beth. “A mug,” she answered. He said he was sure it would be precious to her.

Back at home, June had Quiet Time, and then Noah came home and we all frosted the cake. You may wonder how three people can frost a cake. I poured the contents of the frosting bowl onto the cake and let them take turns with the spatula. I thought it was finished then. After all, it was a chocolate cake with coffee frosting and those are two of Beth’s favorite flavors, so what more did it need? But neither of the kids saw it my way. June wanted me to write on the cake with black frosting from a spray can. I was game, but I found the frosting kept coming out of the can for longer after I stopped pressing the tip than I expected, so the letters were longer and shakier than I intended. With room running out, I had to shorten the message from “Happy Birthday” to “”Happy B-day,” though there was room for 44 as well. I also agreed to triangles, meant to represent birthday hats in the top corners. Both the kids wanted sprinkles but they immediately started to argue about what color so I said no sprinkles. We didn’t have two numeral four candles so I decided to use the one we had for the tens place and four regular candles for the ones place.

Noah didn’t have much homework, so I let him watch television for an hour and June watched, too, and I made dinner. I had asked Beth to pick out a recipe and she found one for breaded eggplant slices stuffed with provolone cheese and baked. They came out quite nicely. I also sautéed some spinach with garlic and dinner was ready.

After his television, Noah made a card for Beth, with the following poem:

Happy 44th Birthday!
While I write this card I’m thankful door
Come through not you of 44
I just finished watching Cyberchase
And you’re not here—
You’re som’ere else in space.
(Of course you’re here now)

He said he scrambled the words so it would be somewhat hard to understand, and thus “more poetic” and also so it would rhyme. I assume the apostrophe in the place of missing letters in the middle of a word is also a poetic touch.

Meanwhile, June decided her handmade card was not sufficient, and she needed a Clifford card, too, so we designed and printed one on the Clifford web site.

Beth got home around 6:45 and we ate dinner. When it was time to open presents June inquired if Beth had indeed forgotten what she’d gotten her and Beth dutifully said she had. She opened her presents and we had cake and ice cream. Noah said the cake looked like “a funeral cake.” Because of the drab colors and spooky handwriting, I suppose. “But you’re forty-four, not dead,” he added cheerfully. I said I was glad about that, and I am so very glad she was born and is alive and with us. Even when I fail to surprise her, I do love her very much.