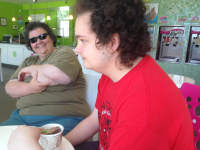 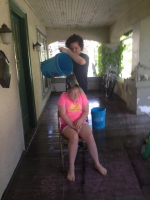 My book club met the Wednesday before Memorial Day to discuss Lincoln in the Bardo, a book that imagines President Lincoln’s grief when his son Willie died of typhoid and Willie’s first night in the afterlife, or rather the bardo, which is a Tibetan Buddhist concept of a holding area between life and rebirth. In this book it’s located in a Georgetown cemetery and populated by all the dead folks buried there who can’t accept their own deaths, insist they’re just sick, and therefore refuse to move on to the next place. Some of them pass through the bardo in minutes, others linger for years or decades. The bardo is also used as a metaphor. The Civil War is a bardo. Grief is a bardo. This weekend, Noah found himself stuck in a kind of bardo as well.

The school year ended for seniors on Friday. (All the other grades have three weeks left, much to North’s consternation.) Going into the last week Noah had homework in all his classes due, mostly at the end of the week, and mostly big, time-consuming assignments. He also had all of the mornings from Monday to Thursday off or partly off because the ninth to eleventh graders had standardized tests. I thought that might help and I guess it did, but Thursday night he still had homework due in five or six classes. He ended up staying up half the night and went to school Friday morning on four hours of sleep…and with undone assignments in four classes.

He’d given up on the statistics chapter and a bevy of little assignments for health, but he wanted to finish two things he’d been working on all week—the storyboard for his hypothetical film version of Isben’s Enemy of the People for English and his film on 5G cell phone networks for Silver Lens (his school’s documentary-making team). It’s his third movie of the year and the second one on 5G. The first one was about safety and regulatory issues. This second, shorter one was about how close the technology is to being finished. And, like 5G technology, it wasn’t ready.

At school he secured permission from his English teacher to stay after school for about an hour and turn in the storyboard then. And he got an extension on the movie (the second one—it was originally due Wednesday).

On Noah’s last day of eighth grade he came home and yelled “Middle school is over!” so loudly and so many times that he went hoarse. He came home Friday more subdued, maybe because he’d had so little sleep the night before and maybe because high school wasn’t really over, not quite. We were planning a celebratory pizza dinner at Roscoe’s, followed by gelato, and we still did it, but because he got home late we scrapped plans for Noah and North to hose the dust and pollen off the porch that afternoon. We do this once a year sometime in in May and the kids get into their bathing suits, spray each other with the hose and make a game of it. It’s their favorite chore, but it would have to wait.

And Noah wasn’t the only one with undone work. I hadn’t finished a draft of my Great Lakes chapter that I needed to send to the graphics person that evening so we also postponed our weekly Friday movie/TV night until Saturday night. I finished the draft after dinner and we were all in bed by ten.

The next day I took care of some less urgent work tasks and Beth, North and I went to the pool, an outdoor one, not the one where I swim laps every week. Noah stayed home to work on his movie. It was a near perfect late May day, sunny, warm but not hot, and not too humid. I should have realized everyone would want to linger for a few hours and brought something to read, but I didn’t so after I’d swum as long as I wanted to and relaxed in a chair on the grass for a while, I got restless and wanted to leave. Beth and North wanted to stay, so I considered walking home—it’s only about a half hour—or going to a nearby grocery store and fetching a few dinner ingredients.

I settled on the second plan because it seemed practical. At the register with my frozen ravioli, mushrooms, and asparagus, I put my hand in my shallow, diagonally cut front pocket and found the twenty that should have been in there was missing. (Later in telling Noah this story I had to explain how a lot of women’s clothes either lack pockets or have non- or semi-functional pockets and he was really surprised.) So, I put all the food back and started to walk back to the pool. My route was mainly along a busy thoroughfare. Imagine my surprise when I spotted my twenty in the grass just off the sidewalk, fifteen or twenty minutes after I must have lost it. I went back to the grocery store, purchased the food, and Beth swung by on the way home from the pool to get me and then Noah and I made dinner. After we ate it, we had our delayed TV night, watching two episodes of Blackish.

Beth and I were busy with errands, house and yard work for much of the middle day of the weekend. Between us we menu planned for the next week, grocery shopped, mopped the kitchen floor, weed whacked, mowed the back yard, and prepared a bed for tomatoes and planted them in it. Then Beth and North made miso soup, asparagus, carrot, cucumber and tofu sushi, edamame, and seaweed salad for dinner. Noah continued to work on his movie all day. North spent the afternoon at Sadhbh’s house. Beth, North, and I wrapped up the day with an episode of The Great British Baking Show.

Beth made homemade waffles for breakfast because that’s a three-day weekend tradition and she and I did more work in the yard and garden in the morning. She weeded along the fence line and I transplanted kale seedlings into the bed she’d prepared for the tomatoes the day before as there was some extra room. While I was weeding an overgrown area near the pea plot, I was surprised to find a ripe strawberry on a stem with some little white ones in my hand. We once tried to grow strawberries there—maybe last year, maybe as long as a few years ago—and apparently the plant survived and seeded outside the garden bed without us ever seeing it in the tangle of weeds. But looking for something with similar leaves in the ground I couldn’t see it, so I quit weeding in case it was still there, but I fear I uprooted the poor thing, just as it was fulfilling its destiny. The berry was quite good, though. I split it into four and we all had a bite.

Around noon Noah said he needed a title for his movie, which made me think he was almost finished. I suggested Talk to You Later. He was tepid about it but didn’t have any better ideas, so that’s what it’s called. (Get it? It’s about phones and the future. I swear, I am underappreciated sometimes.) Sure enough, he finished the movie little after two. There were already plans in the works to go out for frozen yogurt, but now we had a decent justification for dessert on a day when I was already planning to make strawberry shortcake to go with our Memorial Day picnic dinner—with berries from the farmers’ market since our crop consisted of a single berry.

When I asked Noah if he’d like to wash the porch after we got back from frozen yogurt or the next day, he initially said the next morning, because it would be cooler then. I reminded him North would be in school tomorrow morning so it had to be that afternoon or the next one. “Oh, I forgot about that school thing,” he said breezily. And then as we drove home from frozen yogurt, we passed his school and he said, “Oh, look, it’s Blair, where I used to go to school.”

I think he’s out of the bardo.