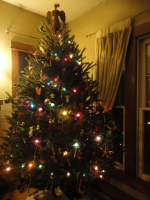 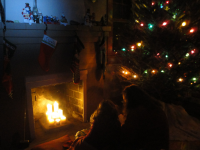 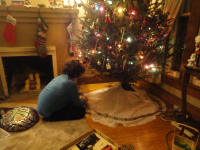 We are spending Christmas at home this year for the first time ever. For the kids’ whole lives we’ve alternated Christmases at my mother’s house and Beth’s mother’s house.  Even before Noah was born we usually spent Christmas with one family or the other, though the alternation was less strict back then. But last January my mother and stepfather moved to Oregon, and it’s not as easy to travel to see them now so we decided to stay home.

Of course I am sad about not seeing my family on Christmas, but there are upsides: no packing, no travel, a more relaxed winter break, and the biggie in June’s eyes—we got a Christmas tree. Because we were always away on Christmas day and our parents had their own trees it never seemed worth getting one before.

On a Friday evening not quite two weeks before Christmas, we all piled in the car after a diner of frozen pizza and drove to the lot of volunteer fire department to buy a tree. Except when we got there the lot was dark and unstaffed and there were only a couple of trees lying on their sides on the asphalt.  It looked as if they’d sold out.

We reconsidered our options. Ace Hardware had trees in their Garden Center behind the store.  And there was a temporary lot in the parking lot of a nearby shopping center.  We decided if we couldn’t support the fire department we’d support a local brick-and-mortar business. Ace it was.  The trees were mostly bundled up and it was hard for me to tell one from another or to guess what they might look like with their branches down but Beth and the kids settled easily on one in the seven to eight feet area and we bought it. When the store employee lifted it to make a fresh cut on the bottom and trim the lower branches, Noah whispered to me, “Tree hugger,” which made me laugh.

The next day Beth set to work cleaning out the clutter of toys in the living room to make room for the tree. Some she moved temporarily down to the basement and some she put aside to give away. Then she set the tree up in its stand.  Sunday she strung lights on it—the lights a thoughtful early Christmas present from my sister who picked lights similar to those we had growing up. However, we didn’t put the ornaments on it because we wanted to wait until after Noah’s paper was turned in and he could participate.

June was delighted with the tree, even only partially decorated, and with the tall candles we put in the fireplace (the chimney doesn’t draw well so we never build fires) and she spent a lot of time reading in front of it, or listening to me read to her.

All weekend and through the week that followed the tree kept taking me by surprise, the unexpected smell of fresh pine in the house, the warm feeling I got from seeing its colored lights shining the dimness of the living room. We thought the cats, or at least Mathew, who’s the more easily spooked of the two, would show some surprise and perhaps even dismay at having a tree in the house, but they had no reaction whatsoever. Apparently we’ve done stranger things than bring a live tree into the house. It is a very odd tradition when you think about it, but it’s also a wonderful one.

The lights proved a bit fickle, as Christmas lights will, and one day a section was blinking on and off, even though they are not blinking lights.  I noticed the neighbors’ tree was doing the exact same thing, about a quarter of their tree was blinking, when it had not been previously, so maybe something about the electric current was odd that day. Or maybe the trees were communicating with each other in Morse code. If so, they said what they needed to say and then stopped.

A week after we bought the tree, we decorated it. Noah had turned in his research paper the day before and was in high spirits.  We’d let him pull the middle school version of an all-nighter on Wednesday night—he was up several hours past his bedtime that night and was still tinkering with it on Thursday morning before he left for school but he got it done. I was super proud of him for completing such a big project and also super relieved.  It felt as if a weight had been lifted from all of us and now we could celebrate.

Friday evening, we got take-out pizza and let Noah choose the restaurant. I thought it would be a quick job to decorate the tree because we didn’t have that many ornaments, just the ones we’ve accumulated over the years as presents from people who didn’t know we didn’t have a tree, a few we’d bought this year, and some spare ones YaYa gave the kids over Thanksgiving.  But I hadn’t actually gone upstairs with Beth, YaYa and the kids when they were selecting ornaments or looked in the box afterward and I didn’t realize it wasn’t a few ornaments she gave us, it was several dozen.

I’d imagined the end result would be a sparsely decorated starter tree, but by the time we’d finished the tree was loaded.  It holds several cherished ornaments from Beth’s childhood, many of which I recognize from Christmases we spent at her family’s house. We also have a newly purchased tree topper, a rusted metal angel holding a star (because we couldn’t settle on whether to get an angel or a star) and our new ornaments everyone had a hand in choosing. June got an angel playing the violin. I meant to buy an ocean-themed one in Rehoboth but I forgot and settled on a Starbucks cup instead.  Beth and Noah picked ornaments with characters from classic Christmas specials.  Beth got the Grinch in a wreath and Noah got a set of four characters from Rudolph The Red-Nosed Reindeer.

Once the tree was decorated, and after June was in bed, Noah sprawled on the floor next to it staring at the candles in the fireplace and playing with the melted wax, and just being still for a long time. I thought this inactivity might be just what he needed after working so hard for so long, but eventually he and Beth got the idea to set up the train and they threw themselves into this task with great enthusiasm.

Last summer Beth’s aunt, who had been storing it, gave Beth the train set, circa 1979, which used to wend its way around the Christmas trees of Beth’s youth. It took some trouble shooting to get it going but once they did, Beth and Noah spent a lot of time happily watching it go around the tree. It was like having Noah’s six-year-old self back for a visit, and I for one was happy to see him so carefree.

Every Christmas I have spent with my mother, from childhood to adulthood, she has declared, with utter sincerity, that this year’s tree is “the best tree we’ve ever had.” It’s become something of a family joke. My sister posted a picture of her own tree on Facebook this year, saying it was the “best xmas tree ever!” Since we’ve only had one tree, I suppose this one is by definition the best one we’ve ever had, but considering the happiness it’s brought all of us, I think it could be the most memorable one we’ll ever have.