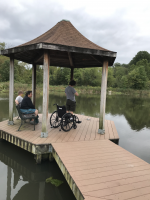 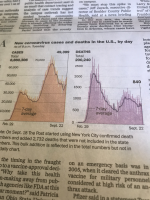 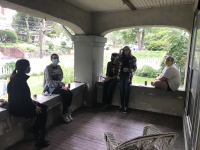 After North’s last ER visit almost three weeks ago, things have plateaued. This is both good and bad. The good part is that no new symptoms cropped up, North didn’t need any emergency medical care, they were able to start attending class regularly, and life calmed down. We got to have two more low-key weekends than we’d had in a while.  During the first one I wrote postcards to voters in Colorado and Noah and I started watching The Handmaid’s Tale, which I’ve been wanting to do for a long time.

That weekend we all went for a walk at Font Hill Wetland Park in Howard County, which is apparently famous for its dragonflies. We did see some, but not a remarkable number. We also saw a heron, a deer, a bunch of turtles, and some ducks. Noah took some drone footage and when North wanted to throw sticks into an algae-covered pond, he filmed them splashing into the water from overhead. I thought of all the time I spent when the kids were younger watching both of them throw sticks and rocks into water or through ice. Minus the drone (and the masks and the wheelchair), the scene could have taken place a decade ago. It felt sweetly nostalgic to me.

The bad part of the plateau is that North’s two main problems, the seizures and the bladder issues, remain unchanged. The seizures are more dangerous now that North’s walking is almost back to normal.* Now that they can walk, they want to and we want them to, but this means they sometimes they fall if they seize while standing. They know it’s going to happen just a fraction of a second before it does and luckily they’ve been trained in stage falls, so they can usually manage not to hit their head, but some days they fall several times. If they are going to stand for an extended period (while cooking for example) they put the walker behind them in the locked position so they can fall into it. Outside they usually use the wheelchair, for safety.

Tuesday of last week was a good day, or what passes for one these days. We finally got the sedated MRI scheduled. Beth had been calling and calling about this for almost a week and a half. It wasn’t clear why it was so difficult, but Urology didn’t want to see us until spinal compression causing the bladder difficulties was ruled out, so having it on the calendar was a breakthrough. The same day, we had our second telemedicine appointment with the psychologist who’s doing Cognitive Behavioral Therapy with North. She spoke to us together, then alone with North, then alone with me and Beth. She seemed to be hearing what we were saying, which has not always been this case on this journey, so that was nice. North, who’s been having trouble concentrating in class some days, due to their chronic pain and fatigue from the seizures, had a focused and efficient school day. Finally, we’ve been having some home repairs done—because in the midst of all this, we got cited by the city during the summer for peeling paint on our porch and some other issues—and the stucco people finished on Tuesday, two days earlier than planned, which means I could schedule the painters.

Of course, things couldn’t go well forever so the very next day when Beth, having secured the MRI, got an appointment with Urology, it was for early November. That’s a really long time from now, so we were discouraged all over again.

We had another relatively calm weekend, though we were of course saddened by Ruth Bader Ginsburg’s death and more than a little alarmed by the political implications. Honestly, I get more terrified about the election every day and this doesn’t help. I wrote postcards to voters in North Carolina and Pennsylvania and that helped a little. On Sunday, Noah painted part of the section of fence we had replaced after the car accident last spring (helping to continue to chip away at our home repair to-do list) and then we watched a couple episodes of The Handmaid’s Tale. We’re trying to finish it before our three-month Hulu subscription expires—we’re two-thirds of the way through the first season.  I’m enjoying it, but as I watch I do find my mind wandering to worst-case political scenarios, especially when we were at the part that covers the backstory of the Waterfords’ role in the coup that installs the theocracy.

On the positive side, that night Beth made a very satisfying late summer/early fall dinner of matzoh ball soup with fried green tomatoes and apple slices and then I watched the first half of the Emmys with Noah, while eating popcorn and writing more postcards, which was fun. Another nice thing about the weekend was that I slept in my own bed for the first time in about a month. North had been sleeping there with Beth, but we had them experiment with sleeping in their own bed Friday and Saturday night. They agreed, but wanted to return to sleeping with Beth for several nights after that. (On Thursday, with some encouragement from the psychologist, we all switched back to our own beds again, for good, I hope.)

Monday morning North went to Children’s for a covid test (#5 for them) which was required for their MRI on Wednesday. They continue not to have it. We all had to quarantine for two days after the test, which wasn’t a big change, though we did have to postpone some errands and Beth and I skipped our morning walks. The MRI itself went smoothly, though we don’t have the results yet. I was sad, but not surprised of course, to see the total of covid deaths in the U.S. hit 200,000 that day.

Wednesday was also North’s half-birthday, so we had cupcakes after dinner. This is a family tradition. There was a virtual Back to School Night for their school that night. The beginning of the evening was extremely glitchy, but eventually we got to hear from all of North’s teachers, except for their English teacher because she’d resigned earlier in the week. She’d found trying to teach and keep her own two elementary school-age kids on task unworkable. And really, who can blame her? Instead of the teacher, the chair of the English department explained the course objectives but it seemed she would not have mentioned the missing teacher except a mother brought it up during the Q&A. (Class the next day consisted of a screen saying to keep working on a personal essay the students are writing.) It was good to see the rest of the teachers and get a feel for their classes, though. I always enjoy Back to School Night. It turns out North’s history teacher is six months pregnant, so there will be a lot of subs in North’s near future.

Thursday was “a great day” in North’s words. They got an A on an algebra quiz and got completely caught up on homework. (Noah has been helping them with algebra when they get stuck and it seems to be paying off.) North’s friend Charlotte unexpectedly dropped off twenty-three homemade cupcakes, with a note that said they were for their half-birthday. Charlotte bakes for Bakers Against Racism and we’d ordered a dozen, so I wondered if the exact number of the extra ones were because the half-birthday was on the twenty-third. I’m still not sure. In addition to all that, North’s case manager at Children’s—we have one now—secured an earlier urology appointment for North in mid-October, out in Howard County, which is a schlep but it was an improvement over November, so we took it. Finally, we got takeout from Italian Kitchen for dinner, at North’s instigation.

Friday Noah and I spent over an hour moving furniture off the porch and stripping ivy from it so the painter could come power wash it in preparation for painting and North had a little backyard party. (Well it started in the yard and then rain moved it to the porch.) Back in March, when the lockdowns were startling and new and half of humanity hadn’t already had a scaled-back birthday, North turned fourteen and we let them see several friends one at a time on the porch to eat cake and promised them a proper birthday party when it was feasible. Three months later, I asked if they’d rather have a small, outdoor party instead of holding out for a sleepover and they said no. When I made the same offer recently, to my surprise, they said yes.  I guess sleepovers are seeming impossibly far away. So they invited four friends over, all at the same time, to drink root beer and eat Cheetos, pizza, and cupcakes. Three of the guests had celebrated with North six months ago, but one was a friend whose mom has been very strict about seeing friends so North hadn’t seen her since March. Norma even brought a present, which North wasn’t expecting.

And in another bit of good mojo, on that day the urology appointment got moved to next week.

*Bolded after the fact. As Nicole picked up in the comments, I seem to have buried the lede.