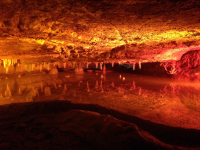 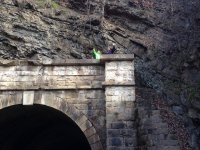 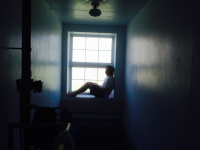 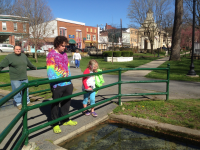 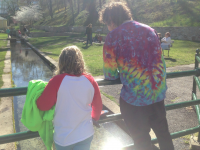 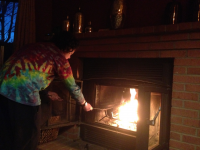 Monday morning at 10:25 we left for the Eastern Panhandle of West Virginia, where we’d rented a chalet in the woods for two nights. As we drove to higher elevations, I could see the shadows of clouds on the hills. I remembered how when we drove east across North Carolina last spring break I could see the spring advancing as we drove and I wondered if it would be the reverse this time. At home the flowering trees were all in bloom except the dogwoods and maybe a quarter of the non-flowering trees had tiny green leaves. In Virginia and West Virginia, there were flowering trees everywhere, including an apple orchard blooming prettily about an hour into the drive. I saw forsythia, redbud, and daffodils everywhere, but by the end of our journey I wasn’t seeing leaves on trees any more, except on the willows.

On the way we stopped at Skyline Caverns. Somehow we’ve neglected to ever take June to a cave, though Noah’s been to at least two, and she squealed with excitement as we pulled into the parking lot. We arrived at 11:55 and had to wait twenty minutes for the next tour, so we perused the gift shop. June found a bin of rubber snakes she thought I might like for my anti-rabbit campaign in the garden. I did buy one.

Skyline Caverns is modest as tourist caverns go, but it has the essentials—stalactites, stalagmites and flowstone. And it has a unique feature, a spiky formation called anthodite. It looks kind of like sea anemones stuck to the ceiling. There are also a lot of streams and pools of water that reflect and double all the formations in fanciful ways.

The guide kept the cheesy jokes to the minimum and always gave warning before he plunging us into total cave darkness so June could scurry over to me to hold hands. We didn’t see any animals other than the trout they stock in one of the pools. But there are bats in the parts of the caves where the tours don’t go and the guide told us about a species of tiny eyeless beetles, now thought to be extinct, that once lived in the cave, as well as a rare snail, found only there and in a cave in Germany. (“That snail is better travelled than most,” Noah joked.) June was entranced. When I asked her what she liked best, she said, “Everything!” and afterward she kept repeating cave facts to us, as if we hadn’t heard them ourselves. It made me think we should take her to a bigger cave someday.

After lunch at a pizza place and ice cream, we drove to the chalet. It was high up in the sky and surrounded by trees, with a hot tub on the deck and a Jacuzzi tub in the upstairs bedroom. Our bedroom was a loft overlooking the living room and the woods, visible from the two-story picture window at the front of the house.

June tried out the hot tub right away, while Noah and I read To Kill a Mockingbird in the loft. We were up to the trial. I made dinner—roast asparagus, egg salad (made from our Easter eggs) and fried tofu. Afterwards, June had a bath in the Jacuzzi. I sat perched on the edge of it, with my legs in the warm, bubbly water, reading to her the twelfth and final book in the How to Train Your Dragon series, a birthday present. As I read, I didn’t realize the plug wasn’t in securely and the water level dipped below the jets. Suddenly water was shooting from them, into the air and splashing the whole bathroom. I bolted for the switch on the wall and then had to spend quite a long time, mopping water off the floor and changing into dry clothes. June got out of the bath and it wasn’t until she was in her pajamas that we realized in all the excitement she never actually soaped up or shampooed. We decided to leave that for the next day.

The next morning we left around ten to go on an expedition to the Paw Paw Tunnel trail. Noah was reluctant to go on a hike and after an hour of driving to our destination, asked, “Wasn’t there a closer trail?”

“There were a lot of closer trails, but this was the one I wanted,” Beth replied.

We walked a half-mile between the Potomac River and the C&O canal to get to the tunnel. June wanted to climb up the stairs at the mouth of the tunnel, so I went up with her. She was startled and a little spooked to see there was no rail up there. She noted it was scarier coming down than going up, but we made it down safely.

We entered the tunnel. The canal was on the left and we walked on the towpath where mules once pulled boats through the tunnel. Here there was a rail and that was a good thing because it was dark in there and the ground was muddy. Water dripped from the ceiling, especially at either end, and Beth and Noah used the flashlights on their cell phones to light the floor, so we could avoid puddles. The tunnel is about three-fifths of a mile long and when you’re far from either exit, it’s just the right amount of creepy to feel like an adventure. It took us at least ten minutes to cross.

At the exit, we were faced with a long, deep layer of mud, water, and dead leaves. Beth tried one side and it looked like her feet were sinking so I tried the other side and it was worse. I got one sneaker drenched on one side and the other one completely submerged. The kids did better, using a downed stick as a kind of bridge. Once we were across we were rewarded with a pretty waterfall on the other side of the canal.

Having been through the hill the tunnel traverses, now we needed to take the trail around and over it to get back. It was two miles of switchbacks up and then down. Once we got some height, the kids wanted to throw sticks and rocks into the canal and listen to the satisfying splash they made. Noah got one stick all the way across the canal, where it lodged in a cleft in the rock face. It was around here Noah forgot to be grumpy about being on a hike and seemed to be enjoying himself.

Near the summit, we rested and ate some trail mix. I was happy to be headed downhill soon after that. On this part of the hike, we now had nice views of the Potomac and the rivers and farmland behind the river. All along the trail there were tiny purple flowers and white ones Beth thought might be mountain laurel and little butterflies with pale purple and blue spotted wings.

Back at the tunnel entrance, June wanted to climb up again. It had scared her the first time, so she wanted to conquer that fear. It’s how she is. This time Noah went up with her instead of me.

We had lunch at a sandwich shop, were Beth and I got very tasty avocado Reubens. From there we headed to the famous springs.

Berkeley Springs State Park is the site of several warm water springs that were used medicinally by first Native Americans and then colonists, including George Washington, and pretty much ever since then. It’s been a park since the 1930s, which means you can soak your feet in the source of one of the springs, which is enclosed in a concrete rectangle, watch the water flow through canals into the spas, or fill a water bottle from water fountains for free.

There are also indoor baths where you can immerse yourself in the mineral-rich water for a fee. We went to the Roman baths, which are narrow rooms mostly taken up with something that’s between a large, tiled bathtub and a small swimming pool. You can rent them for a half hour, which we did. There’s a pitcher of water to drink in case you get thirsty in the warm water, which we did, and every now and then we’d add some cool water from the spigot, or get out to cool down. Noah perched for a while on the windowsill.

Beth and I had visited the baths some time pre-kids and we hadn’t been back since, and it’s a little less relaxing with kids splashing each other (both of them) or trying to swim over the limbs of everyone else who is sitting in the warm water (June). It was nice, though, especially after a hike. I left feeling very relaxed. Even Noah, who had said before the outing he didn’t want to go to the baths decided, “I guess it wasn’t that bad.”

We’d been planning to eat dinner out, but it had been a long day and we’d had a late lunch, so we just picked up some food at a health food store and took it back to the chalet to eat there. As we were leaving Berkeley Springs, I noticed a New Age shop called Portals, and I asked everyone where his or her personal portal would go, if we could all have one. No one had to guess mine. It would go to Rehoboth, of course. Beth had to think about it and said somewhere in West Virginia, but she wasn’t sure where, maybe Blackwater Falls and June said “Grandmom’s house” in Oregon because we don’t get to see her as much since she moved west a few years ago. Noah said instead of a place, he’d like his to go to another dimension, one in which he never had homework.

He was taking a three-day break from homework on this trip, with the exception of reading two chapters from To Kill A Mockingbird every day and when we got back to the chalet, we did that, and then we had dinner and made S’mores in the fireplace. It had been such an active day I thought I’d go right to sleep, but perversely, I couldn’t sleep for a long time, and then I was up in the middle of the night for a while so the next day I was sleepy and subdued.

The next morning before we left, Beth, June and I checked out the recreation center associated with the group of houses where we were staying. The pool was in use for a water aerobics class when we arrived so Beth and June shot basketballs while I watched. June couldn’t resist giving Beth pointers on how to pivot and shoot and she sounded just like her coach when she did so, even down to his intonation and wording.

When the aerobics class exited the pool, we had a quick swim. June is taking swimming lessons so she can pass the swimming test at Girl Scout camp this summer and be allowed in the deep end. She showed me her crawl and backstroke.

Next we packed up the house and drove home, stopping in Frederick, Maryland for a couple hours to have lunch and walk around the downtown. Then we drove another hour and we were home.

Travel isn’t exactly like having your own portal that transports you somewhere else, with no expenditure of time or money, but it does take you out of your own reality, even if for a few shorts days, and that’s usually a good thing.