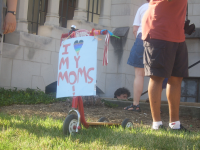 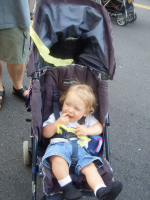 I stared and stared
and victory filled up
the little rented boat,
from the pool of bilge
where oil had spread a rainbow
around the rusted engine
to the bailer rusted orange,
the sun-cracked thwarts,
the oarlocks on their strings,
the gunnels–until everything
was rainbow, rainbow, rainbow!

From “The Fish,” by Elizabeth Bishop
(www.poemhunter.com/poem/the-fish/).

We finally marched in the Pride parade’s family contingent this year, after years of considering and never getting around to it. In June 2001, our first Pride season as parents, we didn’t even manage to watch the parade, even though it passed a mere three blocks from our apartment in the very gay neighborhood between Dupont and Logan Circles in D.C. We tried to go, but Noah was a month old, and getting out of the house was a major undertaking for newbie parents like us. By the time we made it to the corner where we meant to watch, the parade had come and gone. We moved to the suburbs the next May and we didn’t even try to go the next few years, as Pride conflicted with our annual trip to Rehoboth Beach. Noah, who loves pageantry of all kinds, didn’t see a Pride parade until he was four, but when he did, he was favorably impressed with the Mardi Gras beads everyone was wearing and the people throwing candy and the generally festive atmosphere. He even expressed a career goal of being a man who dances on a float in his underpants for a few weeks after the parade. He enjoyed it so much we decided the next year we’d march with Rainbow Families (http://rainbowfamiliesdc.org/). After all, if watching it was fun, marching should be even better. But that year Noah was invited to a birthday party the same day as the parade. We thought we could just make it (even with two-and-a-half-month-old June in tow) but the magician’s act ran late and we ended up not going.

This year when Noah was again invited to a birthday party (for a different boy) on the same day as the Pride parade I experienced a powerful sense of déjà vu. This is just never going to work out, I thought. But Beth pointed out that even though the party was at Sean’s parents’ farm (an hour northwest of Takoma and at least an hour and a half from the parade site) it ended at 3:00 and the parade didn’t start until 6:30. We’d miss some of the stroller/scooter/bike-decorating pizza party that started at 4:00, but it was do-able.

So we all set off for Sean’s parents’ farm, Black Ankle Vineyards (www.blackankle.com/our_story.html), late that morning. The party was a several-hours-long, whole-family affair. The farm was lovely, with lots of room for the kids to run around, cows and chickens for them to visit and a pickup truck to drive them around. Beth and I enjoyed adult conversation (that scarce commodity) with other parents and June had a blast, too. She insisted on playing everywhere Noah had played after the screaming herd of six-year-olds had moved on to their next game. She wanted nothing to do with the tiny inflatable wading pool where Maxine’s one-year-old brother Malachi and Joseph’s seven-month-old sister Isabel splashed. Only the big kids’ pool would do, so I went wading with her. When the big kids played on the Slip ‘n Slide, she watched with interest until they were finished, then she tugged at my hand so she could go toddle up and down its length with Sean’s two-year-old sister Lucy.

We ended up staying until 3:30, a half hour after the party’s official end time, because we didn’t want to miss the piñata and the cake. Once the cardboard and crepe paper Sponge Bob was demolished and its contents disgorged, and the farm-equipment decorated cake was sliced and eaten, I changed June out of her bathing suit and into a clean outfit, denim shorts and a “Let My Parents Marry” t-shirt. Jazmín’s mom Margaret noticed it and said to June very seriously, “I agree!”

We piled into the car and drove to the city. By the time we reached the church, which was serving as the staging area for Rainbow Families, it was 5:30. Beth drove off with June to park the car at the end of the parade route and I took Noah inside. He read aloud with excited recognition the words on the Rainbow Families banner hanging outside the church and the hand-lettered “Love Makes a Family” sign someone was carrying. He remembered both from the Rainbow Families Kids’ Camp he attended one Saturday in April.

In the church basement parents and kids were decorating their wheels and eating. The large room hummed with the energy of scores of exited kids and someone played a rollicking tune on the piano. Noah carefully chose a red crepe paper streamer and a plastic rainbow-colored one to wrap around his scooter. Then we went to eat. I found him a slice of plain pizza, but detecting a few specks of green herbal matter on the gourmet pizza from Alberto’s (our favorite takeout pizza from our urban days), he declared it “not plain.” He dined on potato chips and apple juice instead. I put a cereal bar in my pocket for him to eat later. I thought his scooter was finished, but he told me he wanted to make a sign for it so we headed back to the decorating area and snagged the very last piece of cardboard. Clearly he was paying attention at Kids’ Camp because he knew exactly what to put on such a sign. He instructed me to write, “I Heart My Moms!” and to fill in the heart with rainbow stripes. As a finishing touch, he decided the point of the exclamation point should be heart-shaped. I was torn between trying to get him to do it, since I knew he could, and doing it myself because time was short and people were already drifting out of the church. I took the path of least resistance and lettered the sign myself.

We sat on the grass outside the church, waiting to line up for the parade. As we waited, we spotted Beth and June. I handed Beth a couple slices of pizza. “Alberto’s!” she exclaimed, recognizing the rectangular slices. I’d forgotten to bring any decorating materials for the stroller, but Jack Evans, a D.C. council member, was on hand passing out Mardi Gras beads and I found some scraps of yellow and purple crepe paper lying on the street and soon we were in business.

Rainbow Families was near the front of the parade (in deference to bedtimes) so we got moving pretty quickly after lining up. Once we’d been marching a couple blocks and we came to an area thick with spectators, Noah realized the thunderous applause coming from the curb was for us. He didn’t say anything, but the surprise and wonder of the moment was clear on his face. Suddenly I felt wonder too, a wonder I haven’t felt at Pride in a long time.

Beth and I have been going to Pride since 1988, when we went to Cleveland Pride, not quite a year into our relationship. I was twenty-one and almost as nervous as I was excited to be in a crowd of that unknown quantity, the adult homosexual. Since our baby dyke days, we’ve been to Pride in Iowa City, D.C. New York, Milwaukee and Philadelphia. When Beth worked at HRC (www.hrc.org/), she often had to staff the booths at D.C. and New York Pride and it became almost more business than pleasure for both of us. It’s been a long time since it was anything more emotional than a pleasant afternoon or evening outing, not that different from Takoma Park’s eccentric little Fourth of July parade, an opportunity for the community to gather, celebrate and be a little silly. But when I saw that look in Noah’s eyes, I was momentarily transported to a time when Pride was truly thrilling, when the crowd in its vibrancy, diversity and exuberance could bring tears to my eyes. Victory filled up our little boat and everything was rainbow, rainbow, rainbow!

Living in a liberal enclave like Takoma Park, where signs supporting gay marriage dot the lawns of gays and straights alike, and no new acquaintance blinks when I mention Noah and June’s “other mom,” I must have thought I didn’t need the applause of strangers. But strangers or not, they are my people and I think I do need to hear them cheer at least every now and then.

Maybe I would have predicted this reaction if I’d thought more about the actual experience of marching in the parade and less about the logistics of making it happen. I know from my decades of spectatorship that the contingent of parents and kids always gets some of the most enthusiastic and sustained cheers, often second only to PFLAG (www.pflag.org/). So many in the lesbian, gay, bisexual and transgender community feel estranged from their own families that the sight of kids with their “I love my moms” and “I love my dads” signs and the middle-aged to elderly marchers with their “I love my gay son” and “I love my lesbian daughter” signs always touches the crowd in a profound way. Also, in a community whose children so frequently come into existence after years of planning and saving for adoptions and inseminations, there are a lot of people longing for children who don’t yet have them. As we marched, I thought I saw some wannabe moms pointing and melting at the sight of June, who was obliviously playing with beads and trying to eat the crepe paper on her stroller.

The parade wound its way through our old neighborhood. We showed Noah the street where we lived when he was a baby, the playground where we used to take him, and the office of the non-profit where I worked before going back to grad school. (“You used to work in an office? Like Beth?” he exclaimed. It was apparently a revelation.) By the time we’d reached the Thomas Circle neighborhood, where Beth used to work at HRC, his energy was flagging and Beth was pushing him along on his scooter more and more often. Finally, the parade was over. After few blocks, on our way to the car, I noticed that most of the couples pushing strollers were straight and I felt a little shock of re-entry. At the car, I stripped the stroller of its beads and crepe paper so it would fold up properly.

A man in a car waiting at the light asked in a slightly disgruntled tone if we’d come from “a homosexual march.”

“Yes!” said Beth cheerily and hopped into the car. We divvied up the candy we’d gathered along the route and drove home with its sweetness lingering in our mouths.