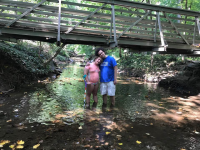 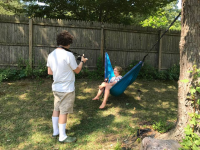 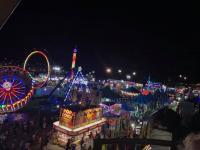 As I mentioned earlier, North’s last performance of the summer was last Sunday when Sweeney Todd closed. There were only two performances that weekend, a Saturday evening show and a Sunday matinee because Highwood had two shows running at once, and And Then There Were None had the theater on Friday evening and Saturday afternoon.

North wanted to see And Then There Were None because they thought their friend Cam was in it and I have a soft spot for the novel because I went through a big Agatha Christie phase in middle school, then I taught it in a class on genre fiction, and then Noah and I read it when he was in middle school. So, of course, I went with them. Highwood had to vacate its quarters on short notice earlier this year because of structural problems with the building and they’d been operating out of temporary space. The last few shows have been performed in a storefront-type space on the first floor of a medical building in downtown Silver Spring. We saw North’s friend Sadhbh play the title role in Macbeth there in May. When we arrived at the ersatz theater, got our programs, and took our seats it became apparent Cam wasn’t in the show, but Sadhbh was. That was just as good, so North wasn’t disappointed. (North thinks they may have lost track of who was who in a group chat.) It was a good production, just slightly scaled down from the novel. I was impressed with how Sadhbh breathed life into Emily Brent, given how flat Christie characters tend to be. Her judgmental glares were quite comic.

The next day I was back at the theater, this time with Beth and Noah, to see Sweeney Todd. North was in the ensemble. They didn’t play a named character but they sang in all the group scenes, died onstage as one of Sweeney Todd’s victims (sliding very nicely out of the barber chair) and had a few lines sung as a duet in “Not While I’m Around.” Some of the Toby’s lines in this song had been reassigned to North and another actor–the two were supposed to portray Toby’s conscience. This was a last minute adjustment that made North happy because they’d hoped to be cast as Toby. It’s a pretty song and well suited to North’s voice. If you’re familiar with Sweeney Todd, or any Sondheim really, you know how complicated the music is. The kids did a great job with it. The actor playing Mrs. Lovett was really excellent in the role. My only complaint was that the instrumental music was too loud, causing me to miss some of the dialogue and song lyrics.

So, after a month jam-packed full of drama camp, choir camp, rehearsals, and performances, it was suddenly all over. The end of North’s summer break will be travel-heavy. They’re spending a week at sleepaway camp in Pennsylvania, then they’ll road trip up to New York with us to drop Noah off at college, and then spend a week in West Virginia with Beth’s mom. In a span of three weeks, they’ll be home just a couple days in between Ithaca and Wheeling. But before all that, they had a week relaxing at home.

Well, kind of relaxing. We packed a bunch of appointments for both kids into that week. Noah had his penultimate drum lesson of the summer, went to the psychiatrist who prescribes his ADHD meds, and got his hair cut. Both kids went to the dentist, but different dentists because Noah’s no longer going to the pediatric dentist as of this summer. North went for an evaluation at the rehabilitation center where they will be doing aqua therapy for their leg. We met with the physical therapist who will coordinate their care and got twelve appointments scheduled from late August to mid-October. The therapy pool has limited hours so they’re going to be missing a lot of school, which concerns me. The next day we went to the physical therapist North’s been seeing since March for a final visit. We’d decided it was better to have all the physical therapy coordinated in one location so we’re saying goodbye to her.

North worked on summer homework. They’d finished their summer math packet sometime in July but I had them to do some extra online review of algebra concepts and they finished the book they chose from the summer reading list, Outrun the Moon, historical fiction about the 1906 San Francisco earthquake. The kids cleaned the bathroom, kitchen, and porch, vacuumed and mowed and I taught Noah how to sew on a button so he can do that for himself at school.

We also found some time for fun. The kids recorded the audio for a music video of a new song of North’s, “Sweet as Cola,” on Monday and they shot the video on Wednesday and started editing it on Thursday. On Tuesday the three of us went for a creek walk, an annual late summer tradition. I wasn’t sure how steady North would be in the uneven surface of the creek bed on crutches, so we did a modified, shortened version. But they were actually fine and faster than me. I’ve been slow and careful in the creek since I fell and hurt my knee in there a couple years ago. It was nice to do even an abbreviated version of the walk. I found myself thinking nostalgically of one of the first times I took the kids to wade at that exact spot ten years ago.

North spent part of Monday and most of Thursday with Zoë, with whom they hadn’t had a non-camp week in common since June. From Friday morning until Saturday afternoon, Lyn and North had what Lyn’s mom called “an epic hangout.” They went to downtown Silver Spring by themselves to have lunch and see The Lion King. Later, Noah and I met them for pizza. North went to watch Lyn’s aerial silks class and then the two of them came back to our house and slept in a tent in the backyard. The next morning I took them both to the pool.

We dropped Lyn off at home around 3:30 and drove to the Montgomery County Fair. We spent the late afternoon and evening there, looking at farm animals, eating fair food, and riding our favorite rides. We finished with the Ferris wheel, the four of us in the little car suspended high above the ground, looking over the colored lights of the fair on a mild summer night, before our August travels scatter us in different directions.