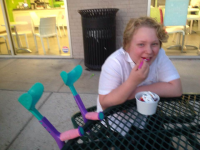 “I used to go to school here,” Noah said mock-wistfully as we drove into the parking lot of his high school, the one he stopped attending a little over a week ago. I made a mental note to tell him to stop making this joke, lest his sibling’s head explode, but this time, North didn’t seem to mind. We were there for their spring chorus concert and they were in a good mood, joking with Noah and laughing.

Because the concert is in June, North was all decked out in rainbow gear, or as much as you can be when the bulk of your outfit is supposed to be black and white. They wore a white short-sleeved button-down shirt, black leggings and black ankle boots, brightened with a black bowtie with multicolored musical notes and rainbow-striped socks peeking out over the tops of the boots.

They were also using a colorful new pair of crutches. Although it’s been almost four months since North broke their tibia and the bone and ligaments have long since healed, they’re still experiencing pain. We are all very frustrated by this. The orthopedist referred us to the pain clinic at Children’s National Medical Center, but our appointment isn’t until July so we ordered North a pair of forearm crutches, which are supposed to be better for your posture if you’re on crutches long term. They’re purple and teal, with pink grip tape around the handles.

It’s kind of depressing to be thinking about North using crutches for the long-term, but that’s where we are. In fact, recently, they’ve been experiencing flare-ups of more intense pain. When this happens, they sometimes sleep on a futon on the living room floor because they can’t get up the ladder of their bunk bed. Last week one particularly ill-timed episode cut short their chorus field trip to King’s Dominion. Beth had to rush home from work and then drive a couple hours (almost as far as Richmond) to fetch them and bring them home.

The chorus was participating in Music in the Parks. Bands, orchestras, and choruses perform in the morning and then enjoy an afternoon at an amusement park. When Noah was in middle school his band always went to Hershey Park. North got to perform, have lunch, and ride one ride before their leg started to hurt badly and then they spent much of the afternoon in the first aid station, waiting for Beth. Eventually, they recovered enough to go on one more ride and attend the awards ceremony before Beth arrived. I was sad about this turn of events because North had wanted to go on this field trip for years and last year it was inexplicably cancelled and next year they’re probably taking art instead of chorus, so this was their only shot.

It wasn’t a total loss, though, because they did perform and the chorus did pretty well, coming in second out of four middle school choruses. The chorus was ranked two on a scale of five (the lower numbers are better). At festival in March, they’d scored a four and this had been a pretty bitter disappointment, so it was nice to have their improvement recognized.

But back to the concert… It was an orchestra, piano, and chorus concert, held at Noah’s school because North’s school doesn’t have an auditorium and they rotate between different high schools whenever there’s a concert. It’s always nice when it’s at Blair, because it’s the closest high school.

While we waited for the concert to start, I scanned the program, looking for familiar names. I saw a few, but not one of North’s elementary school classmates, at least none of the ones I knew, is still in orchestra or chorus.

The orchestra played six songs. My favorite was a Bach piece called “Sleepers Wake,” maybe because I have a recording of it, so it’s familiar. The orchestra teacher explained he’d let the band choose one of their performance pieces from a website of band music. They chose a song called “Tour of California,” which he said reminded him up driving up the Pacific coast on a motorcycle. After the band, two piano students performed—a girl did a duet with the piano teacher, who is also the chorus teacher, and boy played alone. They were both beginners and sounded pretty good, considering.

After intermission, the chorus came on. They had four songs: “Alleluia! Sing Alleluia,” (more Bach) “She Sings,” “Rise Up,” (the Andra Day song, not the Diane Birch song, the Indigo Girls song, or the one from Hamilton with that chorus, which is actually called something else) and, finally, “Shine on Me,” a gospel tune.  Beth said she liked the first one best, North liked the second one, and I favored the last one. Maybe none of us picked “Rise Up” because it was an eighth-grade spotlight so North didn’t sing in it. (The eighth graders are going to sing it again at promotion.)

After saying goodbye to the eighth-graders, Mr. N, the chorus director, thanked the returning sixth and seventh graders and wished the members of the chorus who were taking other electives next year well and expressed his hope they’d be back on the stage someday. Then he spoke about Music in the Parks, and how much the chorus had improved in a little over two months. Well, that’s how I would have put it, but he put a surprising emphasis on the chorus’s low scores at festival, more than on their good scores at Music in the Parks, so that was strange and kind of uncomfortable.

But I don’t think Mr. N needs to worry about North returning to the stage. This summer they’ll be in chorus camp, a drama camp production of Wicked, and most likely in a production of Sweeney Todd. They always find a way to shine.

It was close to North’s bedtime when the concert ended but they wanted to go out for frozen yogurt and it was a beautiful evening and almost the end of a long year for them, so a little celebration seemed in order.