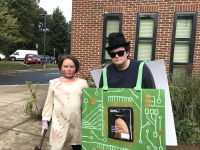 Most years Noah is working on his Halloween costume right up until the Halloween parade and usually we’re sliding it into the hatch of the car hoping the tacky paint won’t smear. (And almost as often he’s still applying the finishing touches he didn’t complete in time for the contest right before he leaves for trick-or-treating.) I thought we might avoid that rush because he made his costume so far in advance this year for the film he was making for school. But last Saturday morning found him on the porch, painting details he didn’t have time to include when he was filming. (He did finish the costume Saturday, though. No new work was needed on Halloween.)

Beth, North, and I had a busy morning. We had an initial meeting with a new therapist for North, then we went to Silver Spring to vote early. There was a moderately long line, but it moved quickly. When someone saw it and left, Beth said under her breath, “Get your ass back here and vote!” As I went through the stations, I made sure to thank every poll worker I encountered. It seems a more vital job than ever these days. From the polls, we went to Michael’s for more green spray paint for Noah, who needed it for his back panel, and then to Starbucks for coffee for the adults and a Witches’ Brew frappuccino for North.

We didn’t know it at the time but the shooting at the synagogue in Squirrel Hill took place while we were driving to vote. I read about it later in the day on my phone. Remember how I said in my last post we’d have a new political horror within the week? I didn’t have anything that horrible in mind. I just don’t know what to say about it, the loss of life, the President’s refusal to stop using the same inflammatory rhetoric about the migrant caravan that lead to it. Words fail.

So I had a heavy heart as we set out for the rec center Halloween party at 1:40. It was a party this year rather than a parade because the day was cold and predicted to be rainy. It never did much more than sprinkle and the parade probably could have gone on, but they have to make the call a few days ahead of time.

The party was at a local elementary school but not the same one where it used to be years ago when the parade terminated at a school. (The route has changed quite a few times in the many years we’ve been going.) I think I liked the old school better because it had a bigger gathering space in the gym. It felt crowded in the cafeteria where the line-up for the contest was. There was less mingling and I didn’t see as many people’s costumes. We did see Keira, an eighth grader from North’s school dressed as a mailbox. Over the years, Keira has been as serious about her Halloween costumes as my kids, maybe even more so. The details on the mailbox, from the rivets to the labels with the USPS logo and collection hours were just spot on. She could have been in the group category because her mom was dressed as a postcard, but she sized up the room and decided to enter Teen to Adult instead, which put her in competition with Noah. (Most years she’s in North’s age group.)

I could see why she did it, though. There were some good groups, one of people dressed as objects representing Takoma Park businesses, two men in prison jumpsuits marked “Cohen” and “Manafort” with a baby in a suit with a briefcase representing Mueller. Creatively used babies seemed to be a theme this year. There was a Frankenstein’s Monster and Bride of Frankenstein with a baby Dr. Frankenstein complete with a white coat and goggles, and a woman dressed as Professor Sprout from the Harry Potter books with a baby dressed as a mandrake in a fabric pot attached to her.

North assessed the nine-to-twelve year old line and decided their main competition was either the girl in Harlequin tights with bleeding eyes or Beetlejuice. North was going for Scariest. (They later told me they’d rather not win anything than win Cutest, but when you’re dressed as Lizzie Borden, there’s really not much risk of winning Cutest.)

The contestants went outside one category at a time for the judges to get a better look at them and take names. Noah and Keira were the only two people who came outside for Teen to Adult, which struck me as strange. There should have been more than that. Group costumes came close on their heels, though, so maybe people in those two categories got mixed up.

The parade took place in an abbreviated form through the halls of the school and we ended up in the gym for a concert and the contest results, which were announced in between songs. The band wasn’t the Grandsons for the first time I can remember and while the new band played a lot of crowd favorites—“Monster Mash,” “Ghostbusters,” and “This is Halloween”—they weren’t as good as the Grandsons in our collective (but admittedly change-resistant) opinion.

We watched the winners of the Four and Under and Five to Eight categories. North was not expecting to win because when they were outside, no judge took their name. This wasn’t a good sign but it’s not a perfect predictor. While the judges usually take more names than there are winners, occasionally they don’t get a winner’s name and the winner is announced by costume, so I thought there was a chance. Most Original went to Medusa. Noah immediately protested that Medusa is not original–“The Greeks thought of her thousands of years ago!”—but it was a very nice execution. The girl’s headdress was a tangle of snakes almost as big as she was. Scariest went to Beetlejuice and none of us remember who won Cutest because we are, as a whole, uninterested in that category.

We waited through another song to hear the Teen to Adult results. Most Original was Keira’s mailbox and it was impossible to begrudge her that win. She’s a worthy opponent. Then someone—again no one remembers who—won for Cutest. I had thought it was likely they’d find more teens or adults during the parade part of the festivities and I guess that’s what happened. There was no announcement for Scariest, which was disappointing. Even though Noah was going for Most Original, hackers are plenty scary so that would have worked, too.

I am always sad for the kids when they don’t win the contest because they put so much work into their costumes and it means a lot to them. But losing is part of competing. They both know that and they are generally good sports about it. That said, Noah seemed to take it harder than usual this year, either because it was probably his last year in the contest or because no winner was announced in a category he could have won. Rather than shrugging it off, he spent some time afterward fretting about whether the judges even understood his costume. He wondered if the news story on which it was based was too obscure. Anyway, we hung around to see the winners in the group category—the Takoma businesses group won first prize—and then North went through the inflatable corn maze and we went home.

We were in Halloween mode, so we launched into carving our pumpkins. Beth’s is the sugar skull, mine is the zombie hand rising from the ground, Noah’s is the cat superimposed over a ghost, and North’s is the cannibal pumpkin—yes, that’s a tiny carved pumpkin in the mouth of the big one. We ate candy corn while we carved and listened to our Halloween playlist and set aside the seeds to roast, all long-standing traditions. These are the things that hold us together and even in our sadness for our country, let us hold tight to each other.