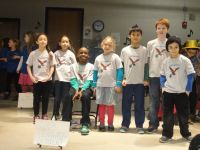 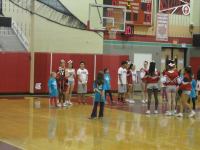 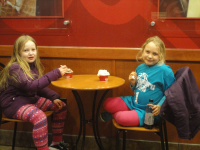 Thursday evening in the car on the way home from basketball practice, June and Megan were chattering about the GeoBowl, which would be held the next day. Both of them were competing in it: June’s team was the GeoHawks; Megan’s was the GeoJaguars. Megan’s younger sister, who was out of sorts, said she was glad they were on different teams. Why, they wanted to know. Because it was time they stopped being friends and started being enemies, she said.

“We’re not enemies because we’re on different teams!” Megan exclaimed, and then added stoutly, “I’ll be glad if June’s team wins.” June chimed in she’d be happy if Megan’s team won, too. They’ve been best friends since kindergarten and it would take more than a geography contest to come between them.

June had been studying for Geobowl since September. The way it works is that packets of information are distributed about a month into the school year to every student in the third, fourth and fifth grade. Then the kids fill in the blanks on the packets, which are corrected and returned to them. Then they take a qualifying quiz in November, and the top seven kids in each class comprise that class’s team. This year’s theme was Europe and Asia.

I volunteered to help grade the quizzes the week of Thanksgiving. A bunch of moms, plus a grandmother and an older sibling came over to the organizer’s house, ate popcorn and drank wine and soda while we graded. I did a big chunk of the fourth grade and then double-checked someone else’s work on a third grade class. No one graded her own child’s class, but people were discreetly informing other parents of their kids’ scores as we went along. As it turned out, there was a strong correlation between your mother volunteering to grade the GeoBowl quiz and a high score on the quiz. I suppose that’s not surprising.

Nevertheless, I didn’t actually expect June to do as well as she did, because her studying had been sporadic until the night and morning before the quiz, when she crammed for about an hour. Anyway, as a result of the grading party, I knew weeks before June did that she would be in the GeoBowl (and to some extent which of her friends would be), but I didn’t think I should tell her until it was official. Then one afternoon in December she came running off the bus, yelling that she was on a GeoBowl team.

There were two before school practices for all participants in January and June’s team had a couple weekend practices and also stayed in the classroom at recess or lunch a few times. They also put a lot of thought into their team name, slogan, and t-shirt design. June was an early proponent of the slogan, “Eat Our Feathers,” but in the end they went with “We Fly with Knowledge.” I didn’t know whether to be relieved or disappointed about that. The logo was of a hawk flying with the Earth in its talons. Beth helped June find the clip art she needed and then she made the transfers and ironed them onto the shirts.

The morning of the Geobowl I quizzed June, picking about forty questions at random from the packet. She got all but three right, so I thought she was in pretty good shape. Beth and I arrived at the school cafeteria shortly before nine a.m. Almost all of June’s friends were on the stage, with one team or another and the audience was full of parents we knew. Most the teams had t-shirts, but in the case of the Mind Avatars, each member was in a different kind of costume. Some of the GeoRockers wore sunglasses and bandanas around their heads in addition to their t-shirts and one of the Wise Wizards had a wizard hat.

The competition started with two rounds of questions about capitals. None of the six teams missed a question. A couple rounds later the scores were still very close. Four teams, including the GeoHawks and the GeoJaugars, still had perfect scores and the other two teams were only a point behind each. The master of ceremonies, who was the father of one of June’s friends, looking very dashing in a tux, had been making jokes throughout the event, but at this point he got serious and said it was anyone’s game. It turned out this wasn’t true because at the end of the regular questions, the GeoJaguars and the Wise Wizards still had perfect scores. The GeoHawks lost to these two teams by one point because when asked to name nine of the ten largest counties in Asia by land mass, they included one incorrect answer: Iraq, which should have been Iran. At that point it went to tie-breakers and when after three more questions the GeoJaguars and the Wise Wizards still had perfect scores, it was declared a tie so the fourth grade could take the stage.

June didn’t seem disappointed to have lost and was happy for Megan, as promised. Beth had volunteered to serve as a judge for the fourth grade so she stayed and I left. We knew a lot of kids in this one (at least four fourth-graders from June’s bus stop were in it) and I would have stayed to watch, but I had not gotten ahead enough in work to do it. I heard it was a nail-biter, too.

About an hour and a half after June got home from school, we left for Megan’s house because there was even more excitement left in the day. June’s basketball team takes a field trip to a girls’ high school basketball game once a season, for inspiration. It’s always a fun outing and this year, because the game was in the late afternoon instead of the evening, we were going out for pizza afterward. We were picking up Megan and bringing her with us.

The game was at the high school Noah will attend next year. We’ve known he’ll go there for a while because it’s our home school and he selected it as his first choice. What we didn’t know was whether he would be in the general school population, in the math and science magnet or the Communication Arts Program, as he’d applied to both. We found out about a week ago he got into CAP, which was his first choice. He wanted to be in it because he’s enjoyed the Media classes he’s been taking in the Humanities magnet in middle school. (He didn’t get into the math and science magnet but since that was his second choice, he didn’t care.) I didn’t really understand how much he wanted to get into CAP until the day he did. He tends to play his cards close to his vest.

Beth took him to an information session on Thursday night while June and I were at basketball practice, but this was the first time I’d been to this high school since he got into CAP, so it felt different somehow, to be there, and suddenly a lot more real that Noah will be in high school next year.

The Pandas wore their team shirts to the game and were greeted on the loudspeaker. Right before the game started they joined the cheerleaders in two lines through which the high school players ran as they came onto the court.

I’ve been to a four Blazers’ games now so there weren’t too many surprises but it is still notable when one’s main experience of basketball is elementary school games, how much faster the high school game is, and how skilled the players are at passing to each other. They don’t seem to need to look for each other at all. They just throw and, magically, someone’s there to catch the ball. It’s not quite like this with third graders. It wasn’t the Blazers’ finest night, they lost 55-37, but the Pandas have lost all four of their games so far this season, too, so maybe it was heartening to see more skilled players lose big. The cheerleaders and the pom squad, which performed at halftime, were also the subject of much discussion.

I heard one Panda’s younger sister and another one’s younger brother have very similar conversations with their mothers about the Blazers’ mascot painted on the wall. It’s a devil, wearing a cape. The team used to be called the Devils, and while the name got changed a while back, the visual representation of the mascot did not. Both children stared at it and asked, “Is that a good guy or a bad guy?” The combination of the horns and the cape was confusing, I think. Finally the little girl decided, “It’s a devil superhero.”

After the game, we took over the dining room of Zpizza in Silver Spring, and consumed five pizzas and a few salads, despite the fact that the Pandas had been running back and forth from the gym to the concession stand all through the game. (June got Cheetos and root beer and knew better than to ask if she could go again.) The kids sat at one table and the adults at another, and we chatted about work and other things until the girls were getting antsy at their table and starting to wander around the restaurant and it seemed like a good idea to leave.

It was late, but June wanted to get ice cream, and it had been such a big day I decided to say yes. Megan and June sat at their own table and ate their ice cream, while Beth and I sat at a table across the room and watched them. Sometimes they are on different teams and sometimes they are on the same team but since they were in kindergarten, they’ve been a team of two. They both have other friends, of course, and you never know which childhood friendships will last and which will fade away, but when I think of them in high school, I imagine June’s sweet, loyal, big-hearted best friend still at her side.