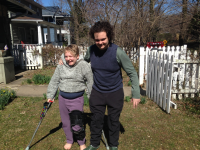 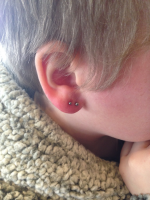 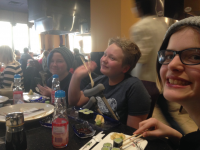 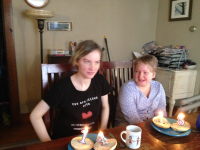 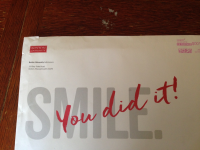 As of Saturday, I’m now the mother of two teenagers. This wasn’t exactly a surprise. I knew it was coming. Here’s how it all went down.

North remembered that the week before Noah’s last birthday, I made him pasta for dinner every night for four nights in a row, so they wanted to menu plan dinners from Monday to Thursday the week before their birthday. That’s why we had a vegetarian pot pie topped with tater tots for dinner on Monday, mac and cheese from a box with broccoli on Tuesday, cheese fries with broccoli on Wednesday, and bean and cheese tacos on Thursday. Basically, we ate a lot of potatoes, broccoli, and cheese. Could be worse, right? Each meal had at least one vegetable and some protein. (This was the nutritional baseline I set for them.) North helped cook most nights and Wednesday made dinner entirely on their own. On Friday we went out for pizza. This was supposed to be a get-together with a couple of their elementary school friends, but, sadly, neither of the girls North invited was free that night.

Saturday morning, I made cheese grits for North’s breakfast, another culinary request. Before I even got out of bed, I knew Noah had gotten into Boston University because it was the day you could check the portal and Beth did. We didn’t say anything to him, though, so he could discover it on his own. BU was the last school on his list to notify him and he got into every school where he applied. Later in the day he wondered if that meant he should have aimed higher, but I think he has a good group of schools to consider. Plus given the trouble he’s having deciding—it’s a three-way tie and he only applied to four schools—it might be a good thing he didn’t apply to more. (The official letter pictured arrived a few days later.)

At breakfast North opened presents: summer clothes and pajamas, a card from Noah that said he’d purchased Dr. Who series 11 so they could watch it together, a necklace, and a wallet with spending money for Colombia in it.

Late in the morning, Beth, North, and I headed out to Silver Spring to have an early lunch at Mod Pizza and to get their ears pierced. The manager at Mod apparently had recently had his own leg injury and in solidarity, offered North a free milkshake. And he didn’t even know it was their birthday.

From there we proceeded to the tattoo and piercing shop. Beth and North had been there ahead of time and North mentioned being a little unnerved by all the devil artwork on the walls (paintings, not sample tattoos). And it’s true there was a painting of the Hindu goddess Kali, holding a severed head over a blood-filled basin right near the display case of jewelry. But devils aside, the space was clean, well-lit, and professional looking. Beth filled out the paperwork and North picked out three studs in two different sizes. They were getting a double piercing in one earlobe and single in the other.

We accompanied North into the piercing room. The man who did it had a reassuring manner. He explained everything very thoroughly and took care to make sure the piercings were exactly where North wanted them. Overall it was a good experience and they are already planning to go back there when and if we let them get a helix and/or industrial piercing (and to get a tattoo when they’re eighteen and we no longer have any say in it). We had celebratory drinks at Starbucks—North complained on the way there that the wind hurt their ears—and then headed home.

North had guests arriving soon, but there was time for one for item on their turning thirteen checklist before they were due, so Beth helped North set up an Instagram account. (They waited a few more days to get a Facebook account and the main purpose of that one is so they can keep tabs on Beth and me.) They followed their preschool on Instagram and a result now some teachers and classmates are following them. I think it’s like the early teen version of when adults get onto Facebook and suddenly find a bunch of high school classmates they haven’t been in touch with for years.

Zoë and Cam arrived in the late afternoon and the three kids hung around eating candy from goody bags (North had reluctantly concluded thirteen was too old for a piñata but they still wanted the candy) and then they had root beer floats and North opened presents—rainbow striped socks and a rainbow cat necklace.

A little later we went out for hibachi. I’ve never done this before so it was interesting to watch the chef cook theatrically on the grill in front of us. Beth, Noah, and I ordered off the menu because of concerns about eating vegetables or noodles that were on the same grill as meat, but North ate noodles from the grill and didn’t get sick. And now that I’ve seen how it’s done—noodles and veggies first and meat and seafood last and the grill cleaned, actually sterilized with fire, in between groups of diners—I might not worry next time.

Noah got on a bus and went home after dinner, but the middle schoolers and Beth and I went to see Five Feet Apart. It’s about two teenagers with cystic fibrosis who fall in love in the hospital, sort of like Fault in Our Stars but with a different disease. It was North’s first PG-13 movie in a theater and they loved it so much they want to buy it and “watch it over and over” when it’s available, so that was a success.

At this point I left to catch a bus home while the rest of the party proceeded to Dave and Busters to play arcade games for a little while to kill time until it was time to go to Highwood Theater. North’s friend Sadhbh was acting in Titanic that night and was coming to our house for the sleepover portion of the festivities after the show. (North’s original plan for the evening was to go to the play with their guests, but it sold out.) The reason I was taking the bus home was that there wasn’t enough room in the car for everyone, but I just missed one and had to wait forty minutes for the next one so I got home just barely ahead of everyone else.

We got the kids set up in the living room in their sleeping bags and we went to bed. They were pretty quiet and I didn’t hear anything from them after 11:30, although North said they were up about an hour past that. Sadhbh’s fourteenth birthday was the day after North’s so North wanted to stay up so everyone could sing “Happy Birthday” at midnight. It must have been during this time that Sadhbh gave North a giant stuffed Peep and North gave Sadhbh stuffed dolls from a video game that they play.

In the morning, we served everyone bagels (with candles for the two birthday kids), strawberries, and watermelon and everyone was gone by ten a.m. Sadhbh had another show in the afternoon was off to a late morning call time.

So North’s been thirteen almost a week now. The week after their birthday was busy, as most of their weeks are. They went to physical therapy Monday, sang at a chorus festival Tuesday, attended a school play rehearsal on Wednesday, and a Rainbow Alliance meeting on Thursday. Tomorrow morning they’re going to the orthopedist and in the afternoon they’ll be back in the physical therapist’s office. The sprained ligaments in leg they broke back in February have been slow to heal and we’re all hoping they improve in the next week or so they can keep up with their classmates during the school trip to Colombia.

After many months of parent meetings and fundraising, the seventh and eighth grade Spanish immersion students will be leaving for their trip in just over a week. It seems like a fitting adventure to usher in North’s teen years because this kid has always wanted to go places. And the very day we drop them off at the airport, we’ll be hitting the road for Rochester, to attend an Admitted Students weekend, which should help Noah eventually decide whether that’s the place he’ll be going.