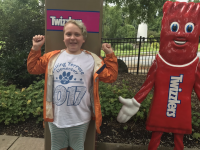 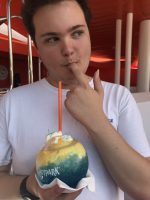 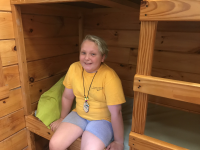 We’re taking two road trips this month. We got back from the short one—a weekend getaway to visit Hershey Park and drop North off at sleepaway camp—on Sunday. Next Sunday we’ll be picking North up at camp and dropping them off at Beth’s mom’s house for a week-long visit while Beth, Noah, and I tour colleges in Pennsylvania, Ohio, and New York.

The week before the Hershey Park trip both kids were home. This is the hardest kind of week for me during the summer, but not because it’s impossible to work with the kids at home. It’s not. They don’t interrupt me as often as they did when they were younger. It’s more I interrupt myself to make sure they’re doing chores, or summer homework, or reading, or doing anything vaguely creative or wholesome instead of staring at screens all day long, which is what they really want to do. So it’s hard to get into a good workflow because I am constantly monitoring them.

Still when mid-August approaches, I often start to feel nostalgic for the summer that’s not even over yet and I don’t mind working with two twelve-year-old kids playing Battleship on the living room rug right behind my desk and one seventeen year old playing drums in the basement, as I did one day last week when North had their friend Edwin over.

Tuesday afternoon when I didn’t have much work both kids and I tried to take a creek walk, but a thunderstorm scotched the plan before we’d been in the water for five minutes. So we came home and I tried to get one or both of them to make a peach-blackberry cobbler with me, but neither of them felt like baking that day. Noah did think to inquire if there would still be cobbler to eat if they didn’t help or if it was “a Little Red Hen situation.” It wasn’t. I made the cobbler and let them eat it.

I also tried to spend some one-on-one time with North, as they were about to be away from home for two weeks. We played a couple games of Clue and watched Alexa and Katie together on Wednesday. Thursday we cooked together—they made brownies for brownie sundaes while I was making veggie burgers and sautéed green beans with pine nuts for dinner.

Saturday morning we left the house a little after eight and drove to Hershey Park. It’s only two hours away so we got there fifteen minutes after the park opened. Even so it was already crowded. We usually go on weekdays to beat the crowds but I guess there’s no beating the crowds on a Saturday in August. (Although, I have to say it didn’t seem to get any more crowded over the course of the day, so it wasn’t as bad as we thought it would be when we first got there.)

As soon as we arrived, we went to the measuring station because North wanted to see if they were a Twizzler yet. They didn’t actually want to go on any rides you need to be that tall for, but it was the principle of the thing. Most of their friends are already Jolly Ranchers. And yes, they are a Twizzler now.

We split up immediately so both kids could get to the their top-priority rides early in the day. For North, that’s the Laff Track, an indoor coaster with a funhouse theme. I won’t ride that one because it goes backward and I can’t even sit backwards on Metro trains without getting sick. So Beth stayed with North and Noah and I went to the Comet, an old-fashioned wooden coaster that’s probably my favorite ride in the park. Noah likes it, too.

Over the course of the day we hit all our favorites. We all rode the Coal Cracker (a log flume), the Trailblazer (a mine ride), the Wild Mouse, a little coaster with a lot of sharp turns but no big drops and the Sky View, a tram I like because it gives you a good view of some of the more daring coasters I will never ride. One of those is the Great Bear, which Noah really likes and rode earlier in the day. It’s a twisty hanging coaster with multiple loops. The only looping coaster I’ll ride is the Sooper Dooper Looper, which has just one relatively small loop near the beginning of the ride. The kids and I always do that one. I even have a t-shirt that says, “I Survived the Sooper Dooper Looper.”

After lunch, the kids wanted to sample one of the more bizarre sweets you can get in the park—BBLz, which are concoctions made of made of different flavors of soda with frosting on top and candy in it. Beth and I got ice cream instead. I got a Reese’s sundae and she got an ice cream cookie sandwich. While we were eating our treats, Beth told me about an article she’d read recently about how Hershey recruited dairy workers to violently break strikes at their factories in the 1930s. At the time we were seated in front of a wall that said, “The Sweetest Place on Earth,” so that seemed a little ironic. (Somehow this got omitted from the detailed Hershey timeline we saw the next day at Chocolate World.)

Late in the afternoon, Noah needed a break, so he went to sit somewhere air-conditioned and listen to podcasts. The rest of us headed to the water park. It wasn’t a particularly hot day but it was muggy and we were all pretty wiped out, so the wave pool and the lazy river seemed more appealing than the water slides. The river was very pleasant and relaxing—we went around twice.

By the time we left the water park and reunited with Noah it was starting to get dark so we rode the Ferris Wheel and watched the lights come on all over the nearby rides. Then we headed to Chocolate World and had a very late dinner. The original plan was to do some shopping in the candy store and take the factory tour ride, but it was already nine-thirty and the adults were done in, so we decided to return in the morning. I was too tired to even get dessert.

At our hotel we slept and woke and had breakfast and Beth and North visited the pool before going back to Chocolate World for the delayed shopping trip and factory ride. By the time we’d finished there, it was time to drive North to camp.

Last fall, shortly after coming out as non-binary, North started asking if they could go to a camp for trans and non-binary kids this summer. The one they had in mind was in New Hampshire, which posed a transportation challenge. Also, at the time, Beth and I were still kind of reeling from North’s disclosure and we weren’t entirely sure they would still be identifying as non-binary this summer. After doing a little research, Beth found a camp for kids of LGBT+ parents within easy driving distance in Pennsylvania. We figured it was a pretty sure bet that North being from a lesbian-headed family wasn’t going to change and the camp seemed welcoming to gender non-conforming kids. It has gender-neutral cabins, which was very attractive to North, who was uncomfortable with the gendered sleeping quarters at Outdoor Education last fall, a problem which would presumably extend to most sleep-away camps.

We arrived at the camp, which uses a YMCA facility, in the early afternoon. It was a lot bigger than the Girl Scout camp North attended the last three summers, and fancier, too. I saw a horse corral and a big climbing wall. Beth said she had seen the climbing wall but not horse-riding on the list of activities, though, so the horses might be for another camp. (Several different camps use the facilities at once.)

The counselors were outgoing and apparently excited to meet all the new campers and greet returning ones. That’s another difference from North’s old camp. They loved it, but because it ran one-week sessions for most of the summer, it wasn’t the kind of place where returning campers would see many of the kids who were in their session the year before. And the counselors were mostly different from year to year, too. This camp is small—just about sixty campers—and only meets for one week a year, so it seemed a lot of kids and counselors knew each other. It made me think it could be a comfortable place for North to return for the next few years, if they like it. I hope they do.

After we signed in, we bought North a water bottle with the camp logo, and headed to their cabin. It was high-ceilinged, with partitions between the bunks, so there was some privacy for the ten or twelve kids bunking there. We left soon afterward. North seemed happy and not nearly as nervous as the first time we left them at sleepaway camp when they were nine. They’re a pro at this now, I guess, and it seemed like a good place for them, full of friendly, outgoing people.

Still, I’m looking forward to picking them up in five days and hearing about all their camp adventures as we drive them to their next sweet place of grandmotherly spoiling, while Beth, Noah, and I set out on a journey that may lead us to find a sweet place for him.