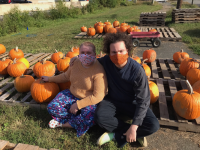 Do you need a little break from sickening dread about the coming election or is that just me? I mean the polls look good, both for the Presidential race and the Senate, but I can’t quite trust them after the last time.  I’ve been churning out postcards to voters, mailing one hundred to Pennsylvania, sixty to Florida, and twenty to South Carolina in just the past week. Noah and I watched the final debate on Thursday. Beth couldn’t bear to do it but I watched all but the dueling town halls, mostly with Noah (He skipped the vice presidential debate and missed the fly.) And I voted on Wednesday, so there’s not much else I can do, unless I find time for more postcards before they stop giving out addresses, which I imagine will be soon.

Well, if you do need that aforementioned break, this will be a post about our Halloween preparations and not much else, if I can help it. (I don’t even have any medical news to report, other than that North had the brain MRI a little over a week ago, but we haven’t gotten the results yet.)

It’s going to be a strange, somewhat austere Halloween, with no parade, no costume contest, and curtailed trick-or-treating. The city arranged some alternate activities but they are mostly online. There’s a Walk and Chalk event on the afternoon of Halloween which I think might be kind of like a parade, but more dispersed, with people in costume strolling down the street during a two-hour stretch but not all marching in the same direction at the same time. I’m a little less clear on the chalk part, but it involves drawing on the street.

I thought it might be fun to go and see other people’s costumes and if I had younger kids I might have pitched it harder, but North wasn’t interested, because they’d chosen a costume that will be covered in glow-in-the-dark paint and not that impressive in daylight. (They are going to be a galaxy.) Noah’s not making a costume this year. Without the contest it’s not the same. Well, he’s probably not. North and Zoë are planning to trick or treat, but only at houses where people have set candy out. They’ve been instructed not to knock on doors. I’m not sure how many people are going to do this, but it’s what we plan to do, and North’s trying to enlist Noah to push the wheelchair so if he goes with them he might come up with a costume or he might just go without one.

Anyway, this is what we have done this month to mark one of our favorite holidays: we made cookies with our Halloween cookie cutters and frosted them, we went to our usual farm to get pumpkins for our jack o’ lanterns, and we carved them.

We made the cookies about a week and a half ago on a Thursday, because that’s our designated family activity night. It couldn’t all be done in one evening, though, so earlier in the day North made the dough and cut most of the cookies, with Noah and me pitching in a little bit, too. North also made the frosting and then both kids tinkered with the food dye to get just the right shades of orange, green, purple, and gray, while I did the dinner and cookie dishes. The actual frosting and decorating was an all-hands-on-deck project. The cookies were a little brittle so we had a bunch of broken bits, but we frosted those, too.

When we finished making the cookies, I said to Noah, “It’s nice to have you here for this but I hope next year you’re not here.”

“Me, too,” he said. (I think we may have had the exact same exchange when we dyed Easter eggs.)

We got our pumpkins last Sunday. This was something else we never expected to do with Noah again, and it felt like a small, bittersweet gift. We drove out to Northern Virginia, to our traditional farm stand, making surprisingly good time. Apparently, when there’s almost no traffic it only takes a half hour to get there, though some years it’s taken us over an hour. There weren’t as many pumpkins on the pallets as usual, and some of them had moldy spots. Possibly this should have given us pause, but there seemed to be more than enough to find four good jack o’ lantern candidates and a big white pumpkin to cover with little metal spiders. We also got several little pumpkins for Noah’s, North’s and my desks, freshy pressed cider, pear butter, and pickled vegetables. For the past few years this outing has involved dinner at Sunflower, a vegetarian Chinese restaurant, and Dessert Story, where we’d get bubble tea or macarons or cheesecake or waffle sundaes. We did get a feast from Sunflower and ate it in a nearby park, but sadly, Dessert Story has gone out of business, a victim, perhaps, of the pandemic.

After eating we wandered around the park a bit. Behind the mansion we found some community garden plots where tomatoes, cucumbers, squash, and flowers were flourishing. Noah had brought his drone, but it turned out we were too close to D.C. or maybe the airport so it wouldn’t take off, just displayed a restricted message. It’s too bad because it would have been fun to see the little gardens from above.

We drove back to Takoma got dessert from Mark’s Kitchen and ate it at one of the picnic tables near the gazebo. I got my favorite early fall dessert, the gingerbread sundae. They were out of the ginger sauce, so it was just vanilla ice cream and whipped cream on gingerbread, but it was still good. The whole outing was highly satisfactory.

During the past few weeks, we’ve also watched Young Frankenstein, It’s the Great Pumpkin, Charlie Brown, and Dracula (the 1931 Tod Browning version). The Peanuts special we watch every year. The films are special favorites of mine so it was treat to watch them this year. I’ve loved Young Frankenstein since I was younger than North (though I admit parts of it have not aged well). When I taught a college class on horror, I used to do a Frankenstein unit that consisted of the novel, the 1931 James Whale film, Bride of Frankenstein, and Young Frankenstein. We also read Dracula in that class and while I didn’t teach the film, I always had a few students writing research papers on it, so it was familiar and nostalgic as well.

Last night we carved pumpkins. We got takeout from Chipotle for dinner because there was  a fundraiser for North’s school that night and it made for a quick dinner before the carving. When we lifted them from the porch wall where they’d been waiting almost a week we were alarmed to discover three of the four had soft spots that weren’t there when we bought them, and two of them had rotten bottoms. But we persevered. My pumpkin is the political one. Beth’s is the flaming skull and the kids did the witches (Noah’s is on the left and North’s is on the right). As I said when I posted the picture on Facebook, they represent things frightful and hopeful.

As we were finishing up, Noah said cheerfully, “I hope I’m not here for this next year” and we discussed whether he could carve a jack o’ lantern in Australia, and decided probably not as it would be spring there and pumpkins would not be in season. Then I told the story of how the fall of my junior year of college I was studying abroad at the University of Córdoba and the Spanish students in my dorm got the idea to throw a Halloween party for the Americans, but as they weren’t that attached to the actual date of the holiday, it kept getting delayed and didn’t happen until mid-November. The kids thought this was pretty funny.

When we’d finished carving, Beth had the idea to slice the soft bottoms off her pumpkin and mine and replace them with foil so the rot wouldn’t spread as quickly. We also spread petroleum jelly on the cut surfaces to protect them. These are the tricks you learn when you live somewhere where it sometimes gets almost up to eighty degrees in late October, as it did several days last week. Fortunately, it’s not supposed to get warmer than the mid-sixties next week. Fingers crossed the jack o’ lanterns will last a week.

We are not finished celebrating. Friday night AFI is going to stream Nosferatu and we’re going to watch it. The yard decoration isn’t complete—the project stalled for a while but I’m hoping to work on it soon. The recreation department is having a photo contest for best yard. We could enter and given how over the top our yard usually is, it seems we should. I hesitate only because I’ve always found it hard to capture the overall effect in one photo and you can only enter one. I actually wrote the rec department to see if a short video panning the yard would be accepted. (I haven’t heard back yet.) One nice addition we have this year is the set of solar-powered colored lights we have to spotlight certain areas of the yard in purple, green, and red.

And of course, we’ll also be giving out and collecting candy (in a socially distanced fashion) on the big night. We’re going to set up a table at the front gate with little goody bags of candy so people don’t have to reach into a communal bowl. We’ll sit on the porch and watch so we can see the kids’ costumes (and so no one gets the idea to swipe all the candy at once). I hope you all have a very happy Halloween, with just the right amount of fright and hope.