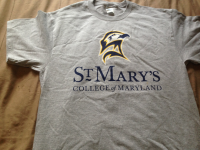 Saturday morning I was out of bed by 6:45, which is earlier than I usually am on a week day. The reason was that Beth, Noah, and I were going to an Open House at St. Mary’s College of Maryland, which, despite the name, is not a Catholic school. It’s Maryland’s public honors college, located in St. Mary’s city in Southern Maryland. After visiting two professionally-oriented schools over spring break, we thought a liberal arts college would be a good next step. That it’s close, affordable, and rigorous all make it an appealing school to have in the mix.

It takes about two hours to drive to St. Mary’s, a little less on a Saturday morning if you leave the D.C. suburbs just after 7:30, a little more if you are driving back on a Saturday afternoon and hit a little traffic re-entering said metro area. We got to the campus at 9:30 on the dot, parked, registered, picked up a free t-shirt for Noah, sampled the pastry buffet, and found seats on the bleachers in a gym. The floor space was taken up with tables where more teens and parents sat. Noah commented that each presentation crowd gets bigger and he was a little scared of what it would be like at the next college. (At Champlain an administrator made his pitch to just us and one other family; at Emerson there were maybe fifty people. Here there were probably a few hundred.) I started to explain how this was a special event, not just a tour you can sign up for any day and Beth stopped me because he knew that already—he’d just been joking.

We listened to presentations from administrators and a panel of current students. It was a little more detailed than the presentations at other schools and I liked getting the students’ perspective. From there we went to an information fair where the academic departments had booths under a big tent. It was crazy crowded in the tent, so we just picked up some brochures, one for Theater, Film, and Media Studies and one for the music department. I pointed out it would be easier for him to take music classes here, as neither Emerson nor Champlain has a music department, (though Emerson has an arrangement that allows students to take classes at Berklee College of Music).

We strolled about campus a bit before lunch, taking in the scenery, watching students fencing on a quad, and visiting the book store. I was charmed that it had a selection of musical instruments for sale (guitars, ukuleles, and bongo drums) and a whole aisle of art supplies and that there were a lot of books outside the assigned books section. The campus is quite pretty—red brick buildings, a fair amount of green space, woods, and ponds. It’s right on St. Mary’s river. There’s a boat house with boats you can take out on the water and it’s only about a ten-minute drive from the Chesapeake Bay.

We had tickets to eat lunch in the dining hall so we did. Noah wasn’t pleased that there was no pasta on offer at that particular meal and he didn’t care much for the pizza he got. I didn’t try the pizza but what I got seemed decent for cafeteria food. The dining area is an airy space with a soaring wooden ceiling and a lot of light.

We had a campus tour next. Our attention was attracted to the guide by the person in the Sea Hawk costume dancing around near her. (They are serious about the mascot at this school. At Champlain the guide pointed to a beaver weathervane and told us the beaver was the mascot and at Emerson we never even learned if they have one, but those sea hawks are everywhere.) The guide took us to the boat house, a dorm room, and a lecture hall. The rooms can’t compete with the Victorian mansions at Champlain, but the room we saw had a view of a pond and the lecture hall was fairly small (it only seats about sixty), which I think was the point—even your big intro classes won’t be that big here. The campus is so lovely I kind of wish I’d taken some pictures, particularly down by the boat house, but I didn’t want to be the embarrassing mom, so I didn’t.

The whole visit, as we walked around, I was thinking of one of my best friends, Joyce, who went to college at St. Mary’s. It was strange to think we were walking down paths she’d probably walked countless times as a young woman, long before we met as a graduate student (her) and an adjunct (me) sharing a tiny office with five other grad students and adjuncts at George Washington University. Joyce and I both had babies several years after that. Her daughter Gwen is a year younger than Noah. And now they’re in high school, Noah soon to be in college. It hardly seems real sometimes that we could all be so much older, except when it seems very real indeed.

We were back on the road by 1:40, heading back to weekend homework and chores. It was hard to get Noah to say much about what he thought of the school, but that’s par for the course. He rarely makes snap judgments, he needs time to ponder things. When I pressed him at dinner that night, he said he thought Champlain was still his favorite, though everything’s preliminary at this point.

We’re probably done looking at schools until summer, when we’ll visit Oberlin and maybe some other schools in that area. Oberlin is my alma mater and Beth’s; many of you already know we named Noah for the dorm where we met. If I felt pleasantly sentimental yesterday for Joyce as she was a decade before we even met, just imagine that trip.