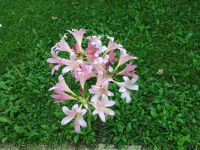 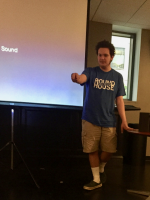 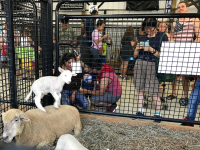 Beth had two back-to-back work trips the first two weeks of August. Except for one night at home, she was gone for ten days.  June was gone most of that time, too, because Beth took her with her when she left for the first trip (the CWA convention in Pittsburgh) and dropped her off in Wheeling with her mom for a week of what the kids call Camp YaYa. She hung out with various relatives, ate cupcakes with Beth’s aunt Carole to celebrate her eightieth birthday, went swimming three times, saw a production of Godspell and The Emoji Movie, and spent the night in a treehouse cabin with YaYa. Noah’s been visiting YaYa for a week every summer since he was about June’s age or a little younger, so she was glad to finally get her turn.

At home, Noah and I were left to our own devices. He was at drama camp during the day the last three days June was gone, but we found time to finish the first book in the Dark Tower series, start the second one, and watch Psycho and The Birds. I didn’t cook anything much more demanding than pasta or frozen foods for dinner (except one night when I made a big vegetable stir-fry) and I got a lot of work and a little reading of my own done. It was nice to have both the one-on-one time with him and some time alone.

I started thinking about our fall garden, as a lot of our summer plants are dying prematurely this year and I didn’t want the garden to be over in mid-August. I planted carrot seeds in an unused plot, cilantro in a couple pots, and cauliflower, chard, and lettuce seeds in a starter tray because those seeds were a little old and I wasn’t sure what would come up. When I have a better sense of what’s going to germinate and survive the seedling phase, I may buy some starts to fill in the gaps. So far, there’s cilantro and carrot tops coming up and I see several promising-looking chard seedlings.

Since I had time sit on the porch a little while every morning, I also enjoyed what we already have in the yard. The resurrection lilies bloomed right on time the first week of August. They’re all done now. One morning during a delightfully cool spell, while I was sitting on the porch, wearing long sleeves and socks and drinking hot tea, I noticed a hummingbird sipping from the flowers on the volunteer trumpet vine that’s taking over our side fence. And as I was looking in that direction, I further noticed that the black cherry tree I planted in the side yard nine years ago was bearing fruit for the first time. (This is about on schedule apparently. They start to produce fruit when they’re ten years old and it was a sapling when I planted it.) The fruit is tiny and bitter, so I’ll leave it for the birds, but I’m glad the tree is healthy and developing as it should, especially since we have a couple of ailing silver maples in the front yard that may need to come down, which makes me very sad.

Wednesday afternoon, Beth returned with June. I was happy to have everyone under one roof, if only for night, so I made a summery feast–yellow squash and corn soup, blueberry muffins with frozen berries we’d picked last month at the berry farm, and slices of one of the last garden cucumbers, and peaches from the farmers’ market. Beth left for Netroots Nation in Atlanta early the next morning, before I was even awake. Having seen her for a few hours made me miss her sharply, more than I had during the six and a half days she’d just been gone. But this was a shorter trip. She’d be returning late Saturday night.

I worked Thursday and June helped me clean the bathroom and make dinner (blueberry pancakes with more of the frozen blueberries). Friday I took off work. I was intending to take June to the library and the Long Branch pool, as I haven’t been to an outdoor pool all summer. But when I looked up the hours, I found it’s closed on Fridays and the Piney Branch indoor pool where I swim laps every Sunday is only open early in the morning and late afternoons and evenings on weekdays. This might have worked most days, but late afternoon was out because Noah had a drama camp demonstration we were planning to attend.

It was already shaping up to be a challenging day. I’d woken with a mysterious itchy rash on my right arm. Then while I was making a run to the Co-Op for milk, I lost my SmarTrip and my phone gave me an ominous warning about a virus I thought was probably fake but just to be safe I decided to power it down and leave it off until Beth got home and could look at it. Nothing seemed to be going according to plan.

So, I thought about it and made a new plan. June had been wanting to go on a picnic for a while so I suggested that. She was right on it, making pasta salad and sugar cookies while I was running my errands. I suggested something with protein might be a good idea, so we also took some veggie turkey slices, and I threw some fruit into the bag as well. The sky was looking threatening, but we packed umbrellas and headed out for the playground. We ate at the picnic table and then June waded in the creek. She didn’t want to swing or use any of the equipment, which made me think about how my kids have been coming to this playground since we moved to Takoma when Noah was a year old, but now our playground days are close to over.

The trip to Round House Theatre was nerve-wracking because the first of the two buses we needed to take was twenty minutes late and for most of the trip I was sure we’d miss the second one and possibly Noah’s presentation. But we just barely caught it and we arrived ten minutes early. I breathed a sigh of relief and felt the weariness I often feel after stress settle over me.

The topic of the camp was theater design and for a week the campers focused on a play that Round House is producing this fall, working on sketches of costumes for characters, brainstorming props, experimenting with lights, painting scenery, and designing background sound. Individually and in groups, they gave presentations on each of these topics. Noah and two other boys presented on the sounds they would use in a specific scene in the play. This was Noah’s third time in the theater design camp and he presented on sound the last time around, too. I guess he’s specializing. He brought home some blueprints he made, the cue sheet for his sound plan, and some faux marble tile he’d painted. It was all very interesting and Noah said the camp put him in the mood to see a play sometime soon, so I hope we do.

I would have liked to stop in Silver Spring for dinner where we switched buses, but Megan was supposed to sleep over, so we needed to get home. We arrived at home to find a phone message letting us know she was sick and couldn’t come after all. June took it hard because the sleepover had been planned for a while and Megan’s family was about to leave for a three-week trip so it couldn’t be re-scheduled any time soon. It was seven when we got home and I ordered a pizza which didn’t come until past eight o’clock. We were all hungry and tired it was a discouraging end to the day, but we tried to salvage it with a game of Sleeping Queens before June went to bed.

Saturday was my rash was no better and now June had it too on her leg. The day was better, though. I took her to the library and the indoor pool because it looked like rain, although it didn’t until evening. We’ll go to the outdoor pool eventually. There’s still three weeks of summer break left. I was also glad Beth was coming home, though thunderstorms in D.C. delayed her flight.

We were messaging a lot all through that day and since she was at Netroots, it sometimes turned to politics: “All the sessions have been interesting but it feels a little precious to be talking about messaging when armed white supremacists are marching in the streets to protect symbols of the Confederacy,” she wrote.  It made me remember when she was at Netroots two years ago and the big drama was a blowup between Black Lives Matter activists, Martin O’Malley, and Bernie Sanders. That seems like it happened in a different country. We have slid so far backwards, so fast, it’s frightening. Except that’s not exactly it. People haven’t suddenly gotten more racist, they have gotten more willing to show it. In any case, it was a good reminder that Beth was doing important work on her travels, however uncertain the results.

But I am glad she’s home (as of 12:15 a.m. Sunday), because I miss her when she’s gone. And even though she was probably exhausted, the first day she was back she went grocery shopping and then we went to the Montgomery County Fair to look at farm animals, eat unhealthy food, play carnival games, and go on rides. The whole time we were there I was struck by the diversity of the crowd and our county—blacks, whites, Asians, Latinos, women in headscarves and others in the garb of Orthodox Jews. I told Beth that night as we were dropping into bed, a little past our bedtime, that everyone wants to eat fried dough and go on rides that take us high into the sky. “Those are culturally universal values,” she joked.

Meanwhile all four of us are planning to go to a rally in support immigrants (specifically the Dreamers) tomorrow morning in front of the White House because there’s important work to do at home, too.