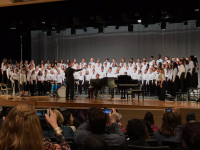 “Where’s my dress shirt?” North was yelling from their room, fifteen minutes before we needed to leave for the Honors Chorus concert. I yelled back that it was hanging up in their closet, on the far right side. No, it wasn’t, they insisted. I went in to check. No white shirt.

The dress code requirements had been lengthy and quite specific, so the idea of North not having a white shirt—the most basic concert requirement—was alarming. The shirt in question was an old band shirt of Noah’s, but I knew we’d given away all his white band shirts in bigger sizes to family we know with a younger musician back when North was wearing more feminine white blouses or sweaters to concerts and I didn’t think they’d ever wear those shirts. (Ironically, around the time I gave up on the idea of a potential tomboy phase making Noah’s hand-me-downs useful and started giving his clothes away he was wearing the very size North mostly wears now. I’ve often wished for those clothes back.) I told North to search the cluttered closet floor with the flashlight on their cell phone while I went to fetch my own white button-down, in a women’s plus size that would surely come to North’s knees, for them to try.

But before I returned with it, North found the shirt, in a crumpled heap at the bottom of the closet. It was wrinkled, but that wouldn’t show from a distance. That it was a white button-down shirt or blouse would and that was the important thing. North gathered up their music and the dinner of finger foods (apple and cucumber slices, carrot sticks, and slices of American cheese and vegetarian turkey) I’d made so they could eat in the car. After we dropped them off at an upcounty high school for the dress rehearsal, we switched the music in the car from shuffling songs from The Greatest Showman (North’s current musical obsession) to songs from Hamilton and drove to the hot pot restaurant where Beth, Noah, and I were going to have dinner.

Have you ever been to restaurant like this? There are burners set into the tables and they bring you your choice of broth to set on it. Then you order raw ingredients to cook in your broth. You can also pluck plates of noodles, vegetables, tofu, seafood, etc. from a conveyor belt that runs between the tables. It was fun but surprisingly pricy, especially for vegetarians because it’s price fixe and we weren’t eating any of the ingredients that usually cost the most. Also, we didn’t see the condiment table until we left and on seeing it Beth was thinking her soup would have been better with garlic. Beth is a big fan of garlic.

We drove back to the high school and found seats in the auditorium. Soon one hundred and twenty singers from forty different middle schools were filing onto the risers (look to the far left for North– for once they’re not the one on crutches) and various teachers and administrators were talking about the Honors Chorus and the program. It was mentioned several times by various speakers that the kids only got to have six of the eight scheduled rehearsals because of weather-related cancellations (one was the “wet pavement day” I wrote about two posts ago).

The chorus sang seven songs, all about joy or peace. I’m wondering if the chorus director has been feeling a little depressed and needed some uplifting. The first three songs were in foreign languages—Xhosa, Latin, and Hebrew. The Xhosa song, “Kwangena Thina Bo,” was described in the program as a celebratory folk song from South Africa. A translation was provided: “When we sing, people rejoice, dance and ululate, because of our music.” The kids stepped down off the risers and did a stamping dance while they sang. (It was the first of several times they all moved into different positions—a process that went very smoothly considering they only learned the changes at the dress rehearsal that very night). The Latin song was “Deo Dicamus Gratias.” As you can guess from the name if you know Latin or a Romance language, it was a song of thanks to God. The Hebrew song, “Ma Navu” was translated thusly: “How beautiful are upon the mountains/The feet of the messenger of good tidings/of salvation and peace.”

For the next two songs, the chorus was split up into tenors, basses and baritones, who sang “He Ain’t Heavy, He’s My Brother,” and then sopranos and altos, who sang a medley of two camp meeting songs, “Rise, Oh Fathers” and “No Time.” North said in the car on the way home that they thought soprano/alto harmonies are usually more interesting than harmonies in the lower registers. (It’s one of the reasons they like being a soprano, I think.) I don’t know enough about choral music to say if that observation is true in general, but it was true of these two songs. Or maybe I was biased because my kid was singing in the soprano/alto group, but I thought the kids sounded great on that one.

The whole chorus reunited to sing a very pretty African-American spiritual “Oh! What a Beautiful City,” and “Why We Sing.” During this last number, all the chorus teachers from the students’ home schools who were present in the audience were invited up on the stage to sing with the chorus.  The lyrics were printed in the program.

Here’s how the song ends:

Music builds a bridge, it can tear down a wall.
Music is a language that can speak to one and all.

And then, in less than an hour, the concert was over. It’s standard at this point for the chorus director or an administrator to make a plea for arts funding in the schools and that’s what happened, but I thought this time the pitch was particularly passionate and focused on giving all students in the county equal access. It made me think about how they didn’t have a chorus or hold auditions for the county’s elementary honors chorus at North’s overcrowded, cash-strapped school last year so North didn’t get to try out or participate. (There was also a paragraph in the program about overemphasis on standardized tests squeezing out arts education, so clearly the director is serious about these issues.)

We left the auditorium had to wait a puzzlingly long time in the hallway for the kids to emerge. It turned out they were having a brief backstage after-concert party with a karaoke machine.

On the way home, North, who’d been quiet on the drive to the concert, was chatty. They told us about a PowerPoint presentation they and two other students from Rainbow Alliance (their school’s Gay-Straight Union) are going to make at a teachers’ meeting explaining how students are sometimes divided by gender in class, most often but not only in gym class and how this creates problems for non-binary students. Then once we were almost home, North mentioned how they’d managed to solve a problem they’d been having with an in-class group science project, making a diorama of the habitat of the black-footed ferret. The others kids weren’t pulling their weight and North was worried they wouldn’t finish on time if the other kids didn’t pitch in, so they organized the whole group and assigned everyone tasks. They said it mostly worked.

One thing we can always count on is this child lifting their voice, whether to build a bridge or tear down a wall, on stage, at school, or anywhere else.