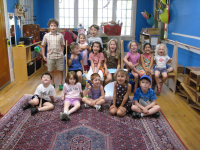 My Fair Lady just finished its six-performance, four-day run yesterday. The two weeks before the performances neither kid had camp, which was probably good for North because the two weeks they were rehearsing Into the Woods and My Fair Lady at the same time were exhausting. And going to camp during the week when they had evening rehearsals or performances running until at least ten p.m. and some nights past eleven would have been even harder.  So it was nice for them to be able to sleep in a little and not have to worry about going anywhere during the day. (On Sunday they slept until almost eight-thirty, which might have been the latest they’ve ever slept in their life. I don’t know how long they would have slept if Noah hadn’t woken them up for their traditional Sunday morning viewing of Dr. Who.)

I think it was actually harder on the grownups staying up past our bedtimes and getting up around the same time as usual for six days in a row. (On Saturday afternoon Beth crashed and slept for almost two hours. That same night I gave up on staying up until Beth brought North home and I’d been asleep for an hour when they got back.)

As for the daytime, it was a bit of a challenge working in my corner-of-the-living-room office with both kids home. I had to keep telling people to turn off the television or watch it with headphones on, and both kids were watching a lot of television—Anne with an E, Liv and Maddie and recorded episodes of Late Night With Stephen Colbert. I’ll let you guess who chose what. But they weren’t complete sluggards. Noah finished a rough draft of a college application essay and he started shadowing a friend of Beth’s who’s a filmmaker and both kids worked on the video they started filming the week we were at the beach and they finished it. Here it is:

North wrote and performed the song and Noah filmed it and edited it and added some stock footage and the piano music.

I put the kids to work around the house, too. The kids cleaned the bathroom, Noah vacuumed and mowed, North mopped the kitchen floor and ran errands for me, and we all weeded a lot. We put a dent in what grew during an almost solid week of rain but at least the ground was so soggy the weeds came right up. North had a couple friends over, but it took quite a few inquiries to find even two people who weren’t out of town or at a day camp. North and I went on a bit of a dessert-making spree. We had a lot of berries from our recent berry-picking expedition so I made a blueberry kuchen and a blackberry sauce for ice cream and North and I collaborated on a blueberry-ricotta-hazelnut cake. North made tapioca pudding, too.

Beth, North, and I also attended our first support group for trans and non-binary kids and their parents (two separate groups that meet at the same time) at Children’s National Medical Center. We’ve had a series of appointments there recently for intake purposes. This was our fourth time there in three months. The groups were sparsely attended– apparently they always are in the summer– but it was interesting. It was just Beth and me and two other moms (of two different kids) but it seemed all three families were in very different places when it came to adjusting to their kids’ identities.

As opening night drew close, to prepare ourselves for the show, we all watched the film version of My Fair Lady. It’s three hours long and we never had three hours free all at once, so we watched it in installments over the course of three nights. It turns out North has a very firm opinion on Julie Andrews v. Audrey Hepburn as Eliza. They’re on Team Andrews all the way. They also think Eliza should not have gone back to Henry at the end. We were all in agreement about that but North was the most emphatic of all of us. It made me reflect how it was just a year ago that North listened to Beth’s and my thoughts about the troubling nature of Belle and the Beast’s relationship with patient resignation but zero interest. A lot has changed in the past year.

Finally it was time for the show. On Thursday afternoon around four I was working and North came into the living room and said, “Don’t I have to be on a bus in twenty minutes?” and I said no, it was an hour and twenty minutes and they pointed out it wasn’t a rehearsal today it was the actual show and they needed to be at the theater at five. I don’t know how I forgot. All I can say is I’d been up past my bedtime two nights in a row by that point and I don’t function well when I’m short on sleep. I threw together something for them to eat (a couple veggie dogs and some microwaved new potatoes) and they were out the door on time to catch their 4:25 bus.

North had been getting themselves to the theater on rehearsal days for six weeks. It all went smoothly except one day last week when they got accidentally on an 18 instead of a 17. After a frantic text exchange with me they got off before the routes of the two buses diverged and then got on the next 17. They were only ten minutes late, but the directors were a little testy about it because it was tech week.

Beth, Noah, and I attended the second performance of the play on Friday evening, after a quick stop for a bouquet of sunflowers, red roses, and sea lavender and another stop for dinner at Mod Pizza. This time I remembered North’s dinner in time—I ordered them their own delivery pizza to eat before leaving for their call time.

We arrived and took our seats in the little theater. Highwood has three performance spaces in the same building. My Fair Lady was the same room where we’d seen Godspell the weekend before. (We go to a lot of shows at Highwood because North always wants to see their friends perform.) Because we’d recently seen the film, I knew North’s character, or rather their characters—they were playing three—wouldn’t appear for a while. Their biggest part was Jamie, one of Alfred Doolittle’s drinking buddies, so they had five lines of dialogue with Alfred over the course of the play and they sang in “With a Little Bit of Luck” and “Get Me to the Church on Time.” Alfred is a comedic role (and coincidentally the one North tried out for) and Jamie only appears with Alfred so North’s scenes allowed them to use their gift for comic facial expressions. They had to dance a lot, too, and even though they like acting and singing more than dancing, they did great with the dances, which involved a lot of leaps. North also played a servant in the Higgins household, singing in the “Servants’ Chorus,” and a guest at the ball.

The ball was performed in the second-floor hallways ringing the atrium just before intermission. The members of the audience were asked to leave their seats and stand against the walls while the actors ascended the staircase that winds up from the first floor and they were announced by name and then waltzed past the audience. I thought it was creative staging that took advantage of the somewhat eccentric layout of the building.

As always, it was an impressive show. The two leads were fantastic. The girl who played Eliza did a decent Cockney accent, had a lovely, delicate singing voice, and she even looked a tiny bit like Audrey Hepburn. The girl who played Professor Higgins has been attending drama camps with North since North was four and Anna was five. (The first one was at their preschool. More recently, Anna was the witch in the Into the Woods at the rec center and Patty in School of Rock at Highwood.) Anna really inhabited the role of Higgins in all its arrogance. And she did some impressive ad libbing when another actor missed his cue. I didn’t even realize something had gone wrong until North told us later.

Seeing Anna and North in the same show inspired me dig around to find this photo of that long-ago drama camp at their preschool. Look carefully at North’s shirt. It doesn’t say Dairy Queen—it’s Drama Queen. I’m still in touch with the moms of several of these kids and none of them were even in Noah or North’s class. It’s that kind of school, a tight-knit community where kids make friends that last for years. And with a little bit of luck, we’ll be seeing North and their friends—old and new—perform together for many years to come.