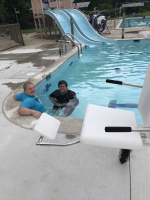 The week after we got back from the beach was a flurry of medical appointments. There was a meeting with the Neurology department at Children’s on Monday, which both Beth and North found discouraging because having found no organic cause for North’s troubles, they seemed to be washing their hands of them. Responsibility for North’s case seems to have been transferred to the Physical Medicine department, which as far as we can tell, handles less clear-cut cases like North’s, but the first appointment there isn’t until the week after next.

In the meanwhile, they do have a diagnosis, Functional Neurological Disorder, also called Conversion Disorder. If you read through the description, you’ll notice migraines are a risk factor, and also that it sometimes take the form of the inability to speak, which did happen to North for about a month and a half in third grade.

Tuesday, North saw the orthodontist, where they switched out their yellow braces for purple, and on Wednesday, they had physical therapy at the rehab hospital in the morning and a pediatrician appointment in the afternoon. It was a long overdue regular check-up but what got us into the office was the fact that we needed a signature for an application for a temporary handicapped parking permit. Surprisingly, when North was discharged from the hospital, the nurse said it couldn’t be a doctor at the hospital who signed it—it had to be North’s pediatrician. (I couldn’t believe it, so she offered to go back and double check, but she came back with the same answer.) Anyway, that’s another appointment off the to-do list.

Thursday we had a telemedicine appointment with Psychiatry at Children’s. We know the doctor; we’d seen her a few times through the gender clinic. We discussed various stressors in North’s life that they might be somatizing. The psychiatrist seemed to find the car accident North witnessed most interesting. She had no interest in Matthew’s death, though that was a lot more proximate (a little over a week before North stopped walking, as opposed to a month and a half before).

Finally, on Friday, North had their second physical therapy appointment of the week. At this one, they stood, holding a bar for several seconds at a time, a few times. Beth was really excited about this and I was, too, when they came home and North demonstrated at the kitchen sink.

Despite this progress, the whole experience has been pretty hard on North. That’s why I was glad that for three evenings that week (Tuesday through Thursday), North’s sleep-away camp had what they are calling “Intermission,” virtual evening meeting so campers who won’t see each other in person this year can re-connect. There was a virtual campfire, with campers encouraged to bring their own S’mores; a discussion about values and ethics, which is something they do daily at camp; and a talent show. I hope this helped bolster North. North was also able to meet up with Miles and Jay at a park and hang out awhile Thursday afternoon.

As another way of reducing their stress, on Wednesday, we agreed to let North drop the remaining half of their Foundations of Tech class. They were having trouble finding assignments (and the messages from their teacher about the missing assignments) and/or submitting assignments they had completed on the portal and they’d gotten very behind.  They had no hard copy or electronic record of the missing work they thought they had turned in and it just seemed too difficult to sort out, especially in an accelerated summer course. Something similar happened fourth quarter in their English class, but in that case, we didn’t find out until their report card arrived with a nasty surprise on it. This is concerning because North’s classes will be all online through the end of January at the earliest, but we’re going to try to be more proactive about making sure they’re getting all their work done. Right now, it’s just too much to deal with, for a required class they just wanted to get out of the way early.

This weekend we got North back in the water, this time a swimming pool. Beth made reservations at Long Branch pool for the three to five p.m. slot on Saturday. This pool is actually two pools (plus a baby pool, which was closed). In addition to limiting how many people are allowed in the pool at once, they’ve taken away all the chairs, though you’re allowed to bring your own. We didn’t, though, which was just as well, because North wanted to spend as close to two hours as they could in the water and we needed at least one parent to stay in arm’s reach. (I spent about forty-five minutes of our pool time swimming laps, my first time since March. For the rest of the time, the three of us were all together in the water.)

Both pools have wheelchair lifts, so we had our pick. We went with the smaller one, which is shallower. While in the water, they were able to dog paddle using just their arms, hold onto the side of the pool and put some weight on their legs, to stand away from the wall while holding Beth’s hands, and even to take a few steps.

They also had three seizures while we were there. I haven’t mentioned the seizures, have I? They last about thirty seconds during which North goes limp and their eyes roll back in their head. They don’t lose consciousness and they’re aware of their surroundings, but they can’t speak. I’d never seen it happen before, but Beth had, as did North’s friends Miles and Jay two days earlier. These kind of non-epileptic seizures are also part of Functional Neurological Disorder.

This coming week will be less busy, with just three medical appointments instead of six. North will go to the dentist and to physical therapy twice. I also hope to get back into swing of some of our pandemic routine that went by the wayside during our travels and while North was in the hospital, and in this hectic week. For a couple months, on Tuesday evenings Beth and I had been alternating between playing Settlers of Cataan with Noah, or listening to a teen gay romance on audiobook (You Know Me So Well) with North. But this week I had a deadline for a technical brochure on B vitamins and needed to work Tuesday evening, so we skipped it. On Thursdays we have an all-family activity and it was North’s turn to choose, but we didn’t remember it was Thursday until shortly before dinner and North, who often choses something that requires preparation, like the pop-up café in May and the scavenger hunt in June, didn’t want to come up with something on the fly, so we decided to defer their turn a week. Finally, we didn’t go to a park to fly Noah’s drone this weekend, partly because he didn’t ask, but partly because it’s a more complicated outing now that North can’t be left at home alone. (They opted to skip most of the drone-flying expeditions in the past.) I think we’ll keep doing it, but maybe not as often.

We’re all getting used to a new routine, at least for the time being, and learning how to incorporate the old routine into it.