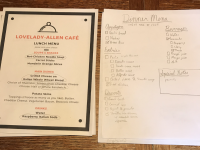 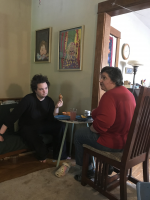 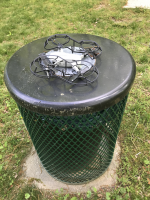 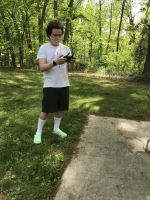 Noah’s finished with his first year of college. His last exam was an oral presentation he gave on Thursday afternoon. The class was Media Industries and he and his partner chose to design Buzzfeed-style quizzes about television shows they watched as children. His quiz was on Cyberchase, which he loved in elementary school. He said watching old episodes to make the quiz was a nostalgic treat (and I think he may have watched more than he strictly needed to make the quiz). But sadly, none of his classmates watched this show in their younger years, so even though a classmate volunteered to take the quiz to demonstrate its use, the poor kid had to guess the answers at random. I imagine the point was the graphic design, however, and not how well his peers could score on it.

Noah had been conscientious about wearing clothes for his classes for most of the seven weeks of remote learning, but toward the end his standards slipped and he gave his final presentation in pajamas. (I suppose I should mention the top looks like a black sweatshirt and based on my college teaching days, I guess that’s dressy enough for a final.)

That same day, we had a pop-up café in the house. We made up menus the night before and the parents cooked for and served the kids lunch, which we ate in the living room, and the kids served the parents dinner, which we ate in the back yard. Grilled cheese was the most popular lunch entree and fried-chicken style tofu was the most ordered dinner. This activity was, of course, North’s idea. As is often the case, they had to talk us into it, but it ended up being fun. Afterwards, we played Settlers of Catan, or everyone but North did, as they don’t care for that game.

Friday we got pizza from Roscoe’s. I told Noah he could choose since it was his first day of summer break, but he sweetly pointed out I never got a chance to choose pizza for my birthday, so we chose together. I also got to choose the movie for family movie night and I went with the Dead Poets Society. I’d never seen it and I have to say, parts of it have not held up well, the sexual politics in particular, but parts of it still appeal.

On Saturday afternoon, Beth and Noah and I went to fly his drone again. This time it didn’t feel as strange to get in the car, as I’d done it six days earlier, but it seemed to make both Beth and me happy and expansive. We talked about things we’d like to do someday, both fantasies that are unlikely to come true (a mustang convertible for her, a beach house for me) and things we might actually manage (visiting Provincetown during some future Memorial Day weekend, as we did many times in the 1990s and meeting up with the friends from we used to see there).

Noah was the car’s DJ and he was playing Airplane Mode. He’d been playing this band the last time we went to fly the drone and I asked him if this was his theme music for this activity. He said no, it was just a coincidence, but then he said he’d search for another thematically named band for the return trip. I suggested Jefferson Airplane, in jest—I doubt he has any Jefferson Airplane on his phone.

On our way out, we stopped at a UPS store so I could return a duplicate birthday gift. I so seldom run errands these days it feels unsettling, but everyone in the store wore masks and stood behind the pieces of tape on the floor, marking out six-foot increments. There’s a Starbucks in that plaza, so we got treats. I tried out the iced pineapple matcha drink. I recommend it, if you like that kind of thing. It’s a pretty green color and it felt very festive to sip in the car.

This trip we visited the Triadelphia reservoir. There are a number of little recreation areas along the shore where you can launch a boat, fish, or picnic. We stopped at two of them. There was a playground in a wooded area at the first one, closed off with snow fencing, and Noah sent the drone in there and flew it between the chains of a swing. He also landed it on a trash can and tested the limits of how high it can go. The second location was more open. There were some people grilling and picnicking but the tables were pretty far apart and we went to the back of the field to distance ourselves further and give Noah room to fly without bothering anyone. At one point I saw a bird heading straight for the drone, but when it got close it did a 180, possibly disconcerted by the loud buzzing noise it makes.

Flying the Drone from Noah Lovelady-Allen on Vimeo.

It was fun to get out of the house again and hang out in a pretty place on a warm May day and watch Noah take enjoyment in his new gadget and imagine ourselves traveling even further someday.

On the way home, Noah played twenty one pilots.

Updates: we know a little more about move-out at Ithaca. It will start in early June and last for six weeks. New York state residents will go first, then people who live within a four-hour radius of the college, and then everyone else, but it’s all contingent on conditions where you live. (There are benchmarks to meet.) If we get to go, we’ll be in the last group, so sometime in July. Sign-up slots become available next week. It all seems reasonable and prudent, but given that it will be awhile before Noah gets his things, we bought him some more summer clothes and a fan for his room to replace the one he left in Ithaca.

Also, the stay-at-home order in the District has been extended until June 8, so it will be June 22 at the earliest before Beth goes back to her office, not that she’s in any hurry.