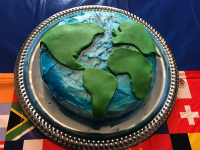 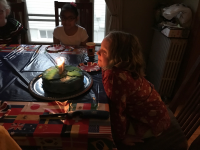 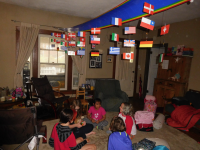 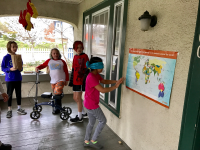 June’s in physical therapy three times a week now, which we hope will eventually get her back on her feet. At her last orthopedist appointment, she was issued a new boot, so now she has one for each foot. The second boot allows her to propel herself on the kneeling scooter we’d been using to push her around to house, when she’s wearing them, that is. (She often takes them off because she finds them uncomfortable.)

Thursday was notable because it was the only morning last week June didn’t have a medical appointment of some kind. It was also her birthday. I found Noah’s old number eleven shirt and asked if she wanted to wear it to school. She did. While I wheeled her out of school that afternoon and asked about her day, she said Zoë showered her with homemade confetti at lunch. She seemed pleased by this.

That evening we had a lemon Bundt cake from the grocery store after dinner (we were saving her birthday cake for her party) and she opened presents—coupons for a weekend trip to New York and a dye job for her hair, a book and a promise of another, headphones, rods for her 3D pen and a lot of clothes. Some were spring or summer clothes, others were related to the international theme of her party. She got a baseball-style shirt with a world map on it, a t-shirt with camel, another with tropical birds, and pajamas with an assortment of Australian animals.

Friday after school, Megan came over to help with party preparations. She and June made the pieces for the Pin-Australia-on-the-Map game by outlining the continent onto tracing paper and then using that as a model to cut out several copies out of construction paper. Then they wrote the name of a party guest on each game piece and decorated them. Next, they printed a world map to tape to a blue balloon and researched international party games. They were hampered in this by the fact that a lot of the games they found required more mobility than June has right now. They settled on Statues, which they decided could stand for Greece, and Pass the Parcel, which is apparently the British name for Hot Potato. From the name, they got the idea to use June’s birthday presents as the parcels. I asked if they wanted to fill the goody bags but June said they could do it before the party, as Megan was coming over an hour early the next day.

After June’s guitar lesson (which was held in a first-floor storefront under the music school to accommodate her injury), Beth and I spent most of Saturday cleaning, decorating, shopping for party food, and baking. I spread the table with the international flag tablecloth and Beth set up the flag centerpiece and hung the flag banner over the living room. Wasn’t Beth’s world map cake a thing of beauty? It was her first time working with fondant. I told her motherhood has revealed hidden talents in her.

Around two-thirty, two and a half hours before party time, we got a phone call from one of the guests who had to cancel. June was upset because this particular girl has a history of no shows, because she’s in sixth grade and now they’re not at the same school they see less of each other, and also because it was now too late to invite someone else. (I’d told her she could have five guests and she’d only have four.)

But she recovered as party time approached. She took a bath and changed into the Indian blouse and skirt Beth found for her at the thrift store. June had requested her guests come in international costume if they had one.

Megan, wearing a beautiful Mexican dress and veil, arrived a little after four. She and June set to work decorating the gift bags with stickers with the names of different countries and stuffing them with pencils and erasers with the flags of different countries, Eiffel Tower and fleur de lis lollipops, globe stress balls, and rubber ducks in international costumes. (I always enjoy this aspect of June’s parties. A few weeks earlier, when it was time to send out invitations she and I went through a desk drawer where we keep free greeting cards from non-profits and picked out a few different designs—an African village scene, the Eiffel Tower, and cherry blossoms to represent Japan—and we taped a sheet with the party information into them and I bought some Chinese New Year stamps to mail them.)

The party guests started to arrive. Naomi wore a lovely Guatemalan skirt with a white blouse. Zoë and Evie took a more casual approach. Zoë’s t-shirt had a wallaby on it and Evie’s said Bahamas. It was a warm day, around 75 degrees, so the guests hung out on the porch talking before they came inside to play Pass the Parcel. As each round ended, June opened the presents. She got a Japanese paper lantern kit and a set of Peruvian worry dolls, among other presents. A couple of the homemade cards featured either a drawing or watercolor of the Earth, which I thought was a nice touch.

The guest were mingling well. I’d wondered if Naomi, who’s in fourth grade, would feel left out but I forgot she’s in Girls on the Run so she knew almost everyone. I also wondered if June chose to invite kids in different grades this year to prevent excessive discussion of who got into what middle school magnet. After she was waitlisted at the humanities magnet, we found out a couple weeks ago that she was not admitted.

While Beth and Noah went to get the pizza, I set up the taco fixings on the dining room table. June’s idea of an international buffet consisted of pizza, tacos, and a pitcher of mango lassi, which Beth made earlier in the day. We ate on Union Jack plates, with Eiffel Tower napkins, and Chinese dragon cups.

After dinner and cake, everyone moved into the living room where we watched Mulan. (Later I wondered if I missed an educational opportunity by not steering June toward an actual foreign film for kids, but as she gets older I leave more and more of the party planning to her.) Anyway, it was a popular choice. The guests were critical of how the girls had to doll themselves up for the matchmaker and of the soldiers’ view of women in the song “A Girl Worth Fighting For” and they cheered when Mulan saved the day in the palace scene.

After the movie, the girls got into their pajamas and played Mafia. They came back to this game in the morning. June’s basketball team played it at the end-of-season party, as well. It’s all the rage in the late elementary school set. When I joked about it being sort of international, since the Mafia originated in Sicily, they all looked at me blankly and June asked, “What is the Mafia?” Turns out no-one knew.

I eavesdropped on their bedtime conversation a bit, as that’s a duty of a mother at a slumber party, I think. The most interesting moment was when they were trying to come up with a definition for the word “pervert.” They decided it meant a peeping Tom.

Soon after that I turned out the lights and left. I’m not sure how late they stayed up. I told them to be quiet by ten and they were more or less quiet by ten-thirty, quiet enough for Beth and me to get to sleep anyway. By 6:40 they were all up, so Beth started toasting bagels and I set the table with cream cheese, butter, and fruit salad and took the girls’ orders for orange juice, milk, or water.

After they played Mafia again and got dressed, we moved out to the porch where Beth had strung up the Chinese dragon piñata and I’d taped a big world map to the house. They all got a couple turns swinging at the piñata until it showered candy, erasers, and temporary tattoos down on them. I was going to help collect candy for my hobbled daughter, but was she was doing a pretty good job crawling around for it herself so I quit.

Next, they played Pin-Australia-on-the-Map. The reason June wanted the guests’ names on their playing pieces was so we could know who got closest to the right location. But this took most of the guesswork out of the game, as June got close on the first try and then everyone felt for the existing cutouts on the map and all the Australias ended up at least partially on top of each other. Nonetheless, Zoë was declared the winner as hers most closely overlapped Australia on the map.

Most of the last forty minutes of party time was spent in trading piñata candy and tchotchkes. Parents started arriving at ten and ten minutes later a profound quiet had settled over the house, the quiet of a house suddenly emptied of tween girls.

Happy birthday, dear June. Maybe someday your adventures will take you all around the world. But for now, I’d settle for seeing you walk to the school bus stop.