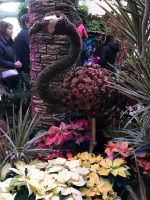 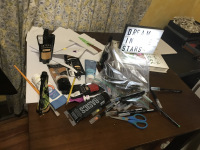 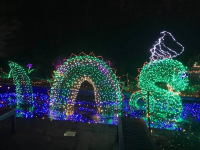 It’s been pleasantly festive around here lately, especially the last two weekends. The first week after we got back from our Thanksgiving trip to the beach, I was really not in the holiday spirit, but I decided to see if I could force it and while this usually doesn’t work for me, this time it did.

Friday evening we watched The Princess Switch, which is not a Hallmark Christmas movie, but it might as well be. Beth said it was “perfectly itself.” It’s not normally her type of movie, or mine, but somehow that night it seemed just right and a good way to usher in a Christmassy weekend.

Saturday afternoon we went to the U.S. Botanical Gardens to see the holiday display. Beth was already in the city for a Philippines human rights protest she had to attend for work. The protest was right outside Union Station, so North, North’s friend Lyn, and I met Beth inside the station by the big Christmas tree Norway donates each year. We picked up some coffee, tea, and hot chocolate, admired the model trains, and walked a few blocks to the Botanical Gardens.

The theme of the display this year was botanical gardens around the country, so there were many little buildings made of natural materials, with a model train running on elevated tracks through the room where they were housed. I was especially taken with the model of the flamingo topiary from Franklin Park Conservatory in Columbus, Ohio. Its body was made of pine cones. We were all impressed with the incredibly detailed miniature Biltmore mansion, as we visited there several years ago when YaYa was living part-time in Asheville, North Carolina. As always, there were also versions of various Washington monuments made of plant materials in the room where you enter the conservatory, and poinsettias everywhere. After seeing all that, we wandered through the regular exhibits—Mediterranean plants, desert plants, medicinal plants, as well as the main atrium. It’s so peaceful in there. I wonder why we don’t go more often.

We dropped Lyn off at home and then took North to Jade’s house where they were sleeping over. Beth and I took the opportunity to have a dinner date at Kin Da, a Thai/Japanese restaurant in downtown Takoma. Then we went home and cleaned out the refrigerator because we had to defrost it in preparation for a repair Monday. (Never say we don’t know how to have fun when we’ve got the house to ourselves.)

Sunday I made peanut butter cookies with Hershey’s kisses stuck in them to mail to Noah in the Last Care Package of the Fall Semester. I included a Pez dispenser in the shape of polar bear with a Santa hat—we have a big collection of these from when the kids were younger and really into Pez. I ordered some Pez online in lemon, orange, and pineapple and had them mailed to him. It occurred to me later that some healthy snacks would have been a good idea for finals. Maybe next spring, I’ll remember to send those.

That weekend was so thoroughly satisfactory that I tried to replicate the one movie-one outing-one baking project formula the next weekend. I was thinking of suggesting we watch It’s a Wonderful Life or Miracle on 34th Street on Friday, but then North wanted to see a movie in a theater and Beth had read good reviews of Knives Out, so we decided to go see it. We met up at Mod where had pizza before the movie.

When I was about North’s age I went through a big Agatha Christie phase—I have about thirty of her paperbacks to show for it. (I haven’t managed to entice North to read any of them yet, but they did see a production of And Then There Were None last summer because a friend was acting in it, so they have a general sense of the genre.) As soon as I saw that familiar font that graces so many mystery novel covers on the screen, I knew the film would be good. It’s not entirely an homage to Christie—some other authors and genres get shout outs, too—but it’s well done, fun, and also has something to say about class, race, and the political moment we’re in. It got three thumbs up from us.

On Saturday morning, North had a portfolio review at the Visual Arts Center, where they’re applying for high school. The review was a two-hour session during which applicants wrote a paragraph about why they were applying and presented a portfolio of work to a teacher, who asked questions about it. But the bulk of the time was spent drawing a still life from an assortment of objects provided. We’ll find out in February if they got in or not.

North was putting the finishing touches on their portfolio right up until the morning of the review. The middle picture is what their desk looked like after they left. Right before it was time to go, North asked for something nicer than a backpack to carry their art in and Beth dug around in her closet and found her father’s old leather briefcase, which the teacher who interviewed them admired and called “vintage.” I wonder what Beth’s dad would have thought of that. He was kind of vintage himself.

After the portfolio review, Beth and North made a big batch of pizzelles. Well, two batches actually, one vanilla and one chocolate. Beth had made a lot of dough because she wanted enough to take to two work-related potlucks, plus some for home consumption, some to take to Blackwater when we travel there for Christmas, and some to take to our family friend Becky, who we were visiting that afternoon. I hadn’t seen Becky (who was North’s preschool music teacher) or her daughter Eleanor (who used to babysit for us and was home from college) in a while, probably over a year, so it was fun to catch up, meet a friend and bandmate of Eleanor’s who was staying with them, and eat Becky’s tasty homemade cardamom bread.

After a short interlude of Christmas card addressing and other Christmas chores, we drove to Brookside Gardens to see the light display. This is a big deal around here, but we’d never been, so we weren’t sure exactly when to arrive for prime viewing and ease of parking. We settled on forty-five minutes before the lights came on at 5:30. We didn’t have to wait in a line for parking—and there was a long line of cars waiting when we left—so it seems to have been a good strategy. We killed the time until the lights came on, ten minutes earlier than scheduled, wandering around the gift shop and listening to a choir sing Christmas songs.

The early crowd was full of families with small kids and when everyone was released into the gardens at the same time it was crowded and loud. “I thought this would be more peaceful,” Beth said. But as people dispersed along different paths, it got less congested and calmer. Calm and bright, actually, because of the lights.

It’s a lovely display. As befits a garden, there were a lot of plants and animals. You could buy your own hyacinth lights in the gift shop and they were out in the garden as well, along with sunflowers, mushrooms, and cacti. From the animal kingdom, there was a fox, a beehive, the Loch Ness monster (my personal favorite), a giraffe, a lion, a frog, a heron, turtles, a dolphin, dragonflies with flapping wings, something we thought might be a cicada because it was winged and had red eyes, a bear, a wolf, and more. There was a pond with lights strung along poles, which were reflected in the water. Trees had their limbs outlined in every color of the rainbow and there was a rainbow, too, with clouds and a lightning bolt that flashed on and off overhead. It was a lot of fun to walk around and see what was around each turn in the path. I would definitely go again.

North was sleeping over at Zoë’s but we hadn’t had dinner yet, so we swung by Zoë’s house, picked her up and had dinner at Cava and then got coffee and pastries at Peet’s, before dropping both kids back at Zoë’s house. (I’d been on the lookout for a replacement for Starbucks’ gingerbread latte, which they’re not selling this year and if you are, too, Peet’s holiday spice latte isn’t quite the same, but it’s as good, so I was happy.) It was nice listening to the kids, who’ve known each other since kindergarten, joking around in the back seat of the car and reminiscing about elementary school.

Back at the house, I resumed addressing Christmas cards and finished the stack. Sunday North attended the Christmas pageant at Zoë’s church to see Zoë play an angel in it, Beth finished the pizzelles, North and I finished our wrapping, and I went swimming, and started this blog post.

Last night we got a quarter inch of slushy snow—yes, I measured it– which switched over to rain in the early morning hours, so naturally school was cancelled and for North, the weekend was extended by a day. They went over to Zoë’s after they’d finished some chores I assigned them. I thought a little bitterly as they waited at the bus stop in front of our house that the whole reason they were off school was that it was supposedly too dangerous to ride in a bus. It’s no longer a disruption to my work day when they’re off school, but blowing through half our snow days for a minor snow event in mid-December just makes it more likely we’ll go over the limit and there will be makeup days at some point, which makes the school calendar uncertain. North told me I shouldn’t stress about things I can’t control, and this would be excellent advice if I were capable of taking it.

Anyway, the snow had all melted by the time I left the house for a walk around noon during a break in the precipitation, so we didn’t even get to see it lit by our candy cane lights this evening, which I thought would be pretty. Oh well. Noah will be home Friday night and he’s staying for a whole month and on Sunday we leave for West Virginia, where we’re spending Christmas with Beth’s mom in a cabin in a beautiful state park, so I really should not complain about anything.