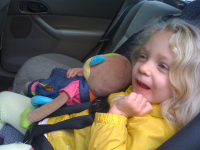 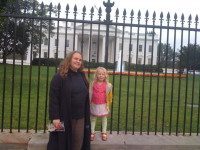 “We have to leave Muffin here,” Beth told June, who had grabbed her big stuffed monkey on the way out the door. “There’s a big list of things you can’t take to the White House and stuffed animals are on it.” I wondered if this was true. I knew from our preparations that you can’t take cameras or guns or diaper bags or knives or food or machetes (some of these restrictions being more inconvenient for us that others), but it was possible Beth just wanted to travel light and not schlep one of June’s bigger stuffed animals into downtown DC with us.

June looked paralyzed. She had that look she gets when she’s wavering between crying and shrugging something off. It could go either way. I thought quickly. “Muffin can ride in the car with us to the Metro station,” I said. “But then he has to stay in the car.”

June agreed. As we all piled into the car, Noah told June the reason for all the restricted items was for security. “They think you want to put a bomb in Muffin,” he said, casually.

“But Muffin is soft!” June protested.

As we approached Noah’s bus stop, he asked if Beth had to say how many people were in our party when she made the reservations for the White House tour. Clearly he was wondering if he might be able to convince us to let him ditch school and go with us. The reason for the trip was that June had asked Beth if we could go see Barack Obama’s house. Beth had asked Noah if he wanted to go and he said he didn’t care, so she’d scheduled it for a weekday morning. Just the night before, he’d changed his mind. He wanted to go. But we told him it was too late and he had to go to school. So we said we might go back someday and tour the West Wing with him (today’s tour was the East Wing—Beth thought June would like to see the fancier rooms and that’s where they are.) Noah did say he’d be content with a trip to Disney Pixar Studios (in California!) as a consolation prize.

Yes, Beth told him, she only had three reservations. So he finally gave up and we dropped him off and his bus stop.

We drove to a parking lot near the Metro and walked from there. Before we left the lot, June settled Muffin into her car seat and called out to him breezily, “Goodbye, I’ll be back some time!”

When we passed Mayorga (http://www.mayorgacoffee.com/) she inquired if we’d be passing it again on the way home. Yes, but we’ll be in a hurry to get to school, I told her, so we could not stop. June didn’t seem too disappointed. She was just too excited to be on an outing to the White House with both mothers (and no brother). On the Metro she kneeled on the seat so she could get a better view out the window.

Once we were outside again, she skipped along the sidewalk. It was 9:05 and our tour was not until 10:00, so we hit the Starbucks at 13th and Pennsylvania to kill some time. It turns out this Starbucks, three blocks from the White House, is frequented by people in much dressier clothes than the one in the shopping center a mile or so from our house. Everyone was talking very quickly, both while ordering and later to each other, as they discussed health care reform and housing starts over their morning libations. The store itself was fancier, too, with wood paneling and little tables made of faux marble.

We had our vanilla and cinnamon lattes and ice water and lemon pound cake and pumpkin bread and around 9:35 we started walking toward the East Gate. While we were waiting for our escort, we watched the squirrels, including a white one, collecting nuts on the grounds. We went through several checkpoints where we had to show i.d..and go through a metal detector and then we were in.

“Did have any?’ June wanted to know.

“Things we’re not supposed to have,” she said.

We had National Park Service White House brochures, but we barely consulted them as we walked through the East Wing. Here’s where the trip would have been much different and much longer if Noah had been along. He would have wanted to play tour guide, reading from the brochure and showing us all the points of interest mentioned in it.

We started on the lower level. June liked seeing an orange tree in the garden right outside the window and she was very interested in all the Presidential portraits on the walls and all the photographs of famous people visiting the White House, including a real princess (Diana) dancing with John Travolta, as Ronald Reagan watched in the background. She was surprised to learn there have been other Presidents besides Barack Obama, so I guess the trip was educational. She pointed to picture after picture and asked Beth to show her the President and say what that one’s name was. Later Beth and I discussed whether she’d noticed that all the Presidents were men and what she’d think of that. If she did, she didn’t say anything about it. I think it was a lot to take in all at once.

One of the first rooms was the White House library. I read the sign that said the President uses it for meetings and press interviews and I had a little jolt, thinking these rooms are real workspaces, not just museum displays. This was a point the guards made over and over by telling us what was done in each room. In the East Room (June’s favorite room due to the enormous crystal chandeliers), one of them mentioned that kids who had won prizes at science fairs had an exhibit of their inventions there just yesterday and the President had been there to review them. (Later in the afternoon, I turned to page A2 of the Post and there was a picture of him, doing just that.)

We moved through the colored rooms—Green Room, Blue Room, Red Room–pretty quickly. It was nice to be able to do something at June’s pace. She was interested in everything, but she didn’t want to linger. By 10:30 we were outside again and headed over to Lafayette Park to look at the ducks in the little fountain. We stopped at a street vendor and bought June an early lunch of a banana, a bag of corn chips and a bottle of water. I meant for her to eat it between the train ride to Takoma and the bus ride to her school, but she wanted to eat the chips right away so I let her start, packing everything back up when we got to the train.

We took the Metro to Takoma, waving goodbye to Beth at Judiciary Square, and went to the bus bays where June ate more chips and banana while we waited for a bus. We caught a 12 at 11:35 that took us right to her school. Beth told Lesley June might be late but we were actually early. We arrived around 11:45 and sat on the porch steps. June had just enough time to finish her lunch and to chat with the mother of the Beaver (aka Blue Oak) who was setting out the traffic cones in the parking lot. I prompted June to say where we’d been.

“The White House?” the Beaver’s mom said. “Is that like the Purple House?”

“No, it’s where Barack Obama lives,” June explained. The Beaver’s mom wanted to know what her favorite part was. I thought she’d say the chandeliers, but she said the pictures on the walls of all the Presidents. All the pictures of our current President would have been unimaginable in 1971, when I was four and a half. I wonder what undreamed of portraits will be on the walls of the White House when June’s grown.