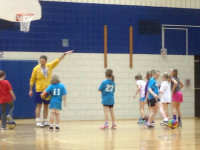 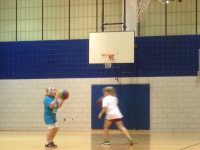 I explained we had a lot going on that night. Beth, Noah, and I had an appointment with a doctor in Bethesda to discuss whether to try a new medication for his ADHD—we’re still looking for the right drug and/or dose. I didn’t think we would get back until six at the earliest and then June had basketball practice at seven and I had book club at seven-thirty. So instead of a home-cooked meal that night, we were all going to eat various frozen foods.

Both kids looked at me silently, but skeptically. I asked if they thought calling a doctor’s appointment, basketball practice, and book club on the same afternoon and evening “chaos unleashed on earth” might be a bit of an exaggeration. Two heads nodded.

The point is…I am a creature of habit. Small changes seem like something completely different to me. Sometimes deviations from routine can be fun, though. We’ve had a few unusual days recently, and they all had something to recommend them.

On Veteran’s Day, Beth had the day off, June had a half-day, and Noah had a full day of school. The reason for the discrepancy is that K-8 teachers have parent-teacher conferences those afternoons. I’ve been going to these so long I didn’t realize they don’t do them in high school until I asked Beth whether we’d be trying to see Noah’s teachers before our appointment with June’s math teacher and she told me we wouldn’t be seeing them at all, which made the day simpler, though I do miss having that opportunity to touch base with his teachers on a one-to-one basis.

The kids left for school and we were left to our own devices in the morning, so Beth and I went to Busboys and Poets for breakfast. We saw another lesbian couple we know (moms to two elementary school-aged kids) come in as we were leaving. I guess it’s the lesbian-moms-briefly-without-kids hot spot in Takoma. Anyway, it was pleasant to have a mocha and an avocado omelet and uninterrupted adult conversation for breakfast instead of cereal and the newspaper, as is my usual habit.

In the afternoon, we went to see June’s math teacher, who explained what they were studying and told us nice things about June and gave us her report card. June had said earlier that she finds it nerve-wracking when she knows we’re talking to her teachers, so she was happy to hear it went well—not that we were expecting anything else. She just gets a little high strung sometimes.

As far as June was concerned, the big excitement of the day was the first basketball practice of the season. The Pandas’ coach, Mike, had decided to start practice early this year, in November instead of December. The Pandas had a 0-8 season last year, and he must have thought it would be nice to win a game or two. Not that the losing streak affected the team’s enthusiasm. Those girls have heart. It’s the Panda way.

Not counting Mike and his daughter Maggie, we were the first ones there, but soon the gym was ringing with the sound of running feet and shouting voices. I always enjoy basketball practice, partly for the opportunity to socialize with other moms, but also just to watch the girls. They always seem to be having fun and this was no exception.

Thursday: The Day after Veteran’s Day

June had another half-day because it takes two days for teachers to get through all the conferences. I had an appointment for a mammogram in the city that I knew would eat up a good bit of the day, mostly in transit, so I arranged for her to go home with a friend and stay the whole afternoon, so I could get in a couple hours of work before Noah got home at four.

If I have a late morning or early afternoon appointment in the city I nearly always get lunch out so I tried a new (to me) rice/noodle bowl place. It’s the kind where you get a card with checklist of ingredients and you pick a certain number from different categories and then you get in line and hand it to them and they make it in front of you. I got buckwheat noodles in miso broth, with a fried egg, tofu, peanuts, seaweed, and other vegetables. It was really good.

For most of the five hours I was out of the house, I was binge-listening to a new NPR psychology podcast, Hidden Brain, which I recommend if you’re in need of a new podcast in your life. Other than the actual mammogram, the whole day was another pleasant change of pace.

Nevertheless, I was looking forward to a week of the both kids being in school for five full days. We were two weeks into the second quarter and we’d had exactly four of those this year. So of course June woke up on Monday saying she felt sick and wanted to stay home.

She had no verifiable symptoms and I wasn’t sure she was really sick, but I let her stay home because I never want to send her to school when she says she’s sick and then have the school nurse call me and say she’s thrown up or something. Beth had an idea that she might have been nervous about a missing homework paper. She’d left it at Zoë’s house on Thursday and had been fretting about it ever since, even though she’d called Zoë, who had promised to bring it to school. I’m not sure if that was the problem or not, but that afternoon we checked and found out Zoë came through, giving the paper to their English teacher.

Anyway, she stayed in bed until 12:30, weakly requesting some chamomile tea and toast around 10:30. She seems to have figured out exactly how long she needs to stay in bed before I think walking her to school and back just isn’t worth it, because at lunchtime she was recovered, wanting lunch and cutting out fabric for a dress she wanted to make for one of her dolls.

The fact that June lays low and stays out of my way when she’s home sick means it’s no longer a lost day of work for me. I wrote some web copy about selenium and zinc, exercised, and even read a chapter of Daniel Deronda, which I’d be discussing at book club in two days. I did spend much of the afternoon with her, though, and, as always when something had to give, it was housework. I gave up plans to vacuum and sort through the masses of paper that continually drift onto the dining room table.

What I did instead was read two chapters of The Horse and His Boy to her and quiz her on the multiplication tables and on U.S. geography, as the qualifying test for GeoBowl was Wednesday. Since she was no longer feeling sick, I also had her practice her violin, finish her Native American diorama, and take the laundry down off the line. I kept her busy until dinner time. In exchange for letting her stay home when she requests it, I try to make sure sick days aren’t too appealing.

So, I bet you’re wondering how did that busy Wednesday go? It was fine. We got back from the doctor’s appointment at 5:50 (with a new prescription), heated up frozen lasagna, empanadas, and enchiladas and ate more or less at the same time. Beth and June left for practice around 6:45. I stayed at home until 7:25, which was cutting it close, because Noah was working on a 300-word opinion piece about American imperialism and I wanted to be there if he ran into a snag. But he’d written his introductory paragraph with no help by the time I left and for him that’s lightening speed so I was happy as I rode the bus (which came on time) to book club. I was only five minutes late.

I usually manage to remove myself from whatever I’m currently fretting about at book club. I think that’s part of why I find it so restorative—that and because it engages a part of my mind that used to get a lot more exercise—but I did occasionally wonder how Noah’s essay was coming as we discussed the psychological, sociological, and narrative elements of Daniel Deronda.

By the time I got home, around 9:20, Noah was in the bathroom in his pajamas, flossing. The essay was not finished but he was up against the word limit already. I offered to take a look at it and suggest cuts and he seemed open to that plan. Writing to word limits is something I do a lot these days, but he doesn’t always want to avail himself of my expertise. He was probably happy not to be told he had to go to bed with the essay unfinished, as it was twenty minutes past his bedtime.

We moved to the study. I told him to put in his required quotes before we started looking for places to cut. He did that while I perused Facebook. When he had all his points included, the essay was 360 words and had no conclusion. I started highlighting places where he could word things more succinctly and pretty soon he got into the swing of it and was finding them himself. A lot of the changes were actually improvements, but there were a few things I was sorry to see go. His quotes were pretty truncated and would have been more effective if he could have included more of them, but he got it down to 300 words, including a brief concluding sentence.

I help Noah with his homework frequently, everything from quizzing him on Spanish vocabulary, to reading to him (I’d read the one of the two required sources for the essay to him the night before), to helping him outline ideas or edit, to just being in the same room to make sure he’s attending to his work. Some of it I do just to make his life more manageable, but because he’s in a humanities program, some of it is actually fun for me. Anything to do with writing usually falls into that camp.

He was in bed, paper printed, by 10:10. Beth and I go to bed very early, around 9:30 or 9:45 most nights, so she was already asleep. But what with all the mental stimulation of the evening, I was wide awake, so I took a melatonin tablet and stayed up another twenty minutes or so, so I wouldn’t end up tossing and turning in bed. And the chaotic day was over.

Monday is Beth’s birthday, which ushers in the holiday season for us. In the coming weeks, there will be a good deal more joyful chaos in our lives. I think I’m up for it.