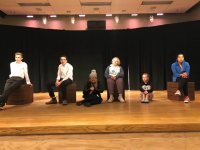 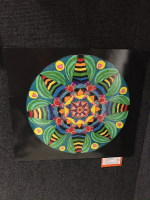 I’ve been low in spirits pretty much all month, so it was nice to have two artistic events to look forward to this week. North’s acting class had its showcase on Monday afternoon and they had a piece in a middle school art show we went to see on Thursday evening. (Actually, the whole week was busy—in between the acting showcase and the art show, we had a trans kids’ and parents’ support group on Tuesday and my book club met on Wednesday.)

I had a scattered, unproductive work day on Monday, but I finished the Jason section of The Sound and the Fury (my book club book), did two loads of laundry, made a batch of vegetable stock, and got dinner mostly prepped before I left the house at 4:25, so I guess the day wasn’t a total loss. My bus was late, but I’d left plenty of time, so I still arrived at the community center ten minutes early. I waited on a bench outside because I wanted the fresh air, even if it was overcast, chilly day.

North’s been attending this acting class since mid-September. It’s the same one they’ve taken four times, starting in fifth grade. It’s run by the director of the musical theater camp North attends every summer. When I entered the auditorium, I recognized most of the kids from past classes and camps. It was a small group this year, only six kids. They’d been working in pairs, on three scenes from three different plays.

North and Gretchen’s daughter Grace went first, doing a scene from Leaves, an Irish play about how a family reacts to the attempted suicide of its oldest daughter. North and Grace were playing the two younger sisters, who are discussing their sister’s return home in what starts as a muted, moody exchange that turns emotionally explosive. They both did a very good job, but they’ve been acting together since they met in a preschool drama class when they were both three, so I suppose it’s not surprising they have good onstage chemistry. (I especially liked them together in Into the Woods as Little Red and Jack a couple summers ago.)

The other two scenes were from The Man in the Moon and Dead Poets’ Society and they were also well done. After the scenes were finished, Gretchen had the actors discuss the acting concepts they drew on while they worked on the scenes (substitution, subtext, objectives, obstacles, beat changes, etc.)

Finally, the audience was invited onstage to participate in some improv games with the actors. I declined, even though most of the mothers (and one younger sister) did get up on stage. As I told my exasperated child, it’s their job to act and mine to write about it. That’s our division of labor. The games consisted of a group-written story, constructed by having each person contribute one word at a time, and a game in which you have to create a scene entirely out of questions. That last one looked hard.

North had been on the fence about enrolling in the class this year—it was tiring last year going straight from school to acting class to play rehearsals and they didn’t know they weren’t going to be in the fall musical at Highwood until the theater closed quite suddenly in September.  I’m glad North did take the class because when they didn’t manage to sign up for an audition slot for the school play, it ended up being their only acting activity this fall. We have Grace to thank for it because she’d been cajoling North via text until they finally said yes.

Thursday we had an early dinner and drove out to the high school that houses the Visual Arts Center (to which North’s applying) to see a middle school art show featuring pieces from twelve different schools. Art teachers at these schools selected artwork to send and North’s art teacher chose North’s mandala. It was one of only two mandalas she chose.

When we arrived, people were congregated in a hallway in front of a portable screen. The mistress of ceremonies called all the middle school art teachers up front to be recognized, and then explained that a retired middle and high school art teacher had judged the art. There were twelve categories and four to six winners in each category—first place, second place, third place, and one or more honorable mentions. As the winning art appeared on the screen the MC explained what the judge had liked about each piece and then had the artist come up front for a photo. It was interesting to hear the judge’s thought process and very supportive and affirming. North didn’t win a prize, but as they say, it’s an honor to be nominated. (The other mandala from their class won third prize in the Color category.) After all the awards had been given out, we went into the room where the art was displayed. We went to each school’s display and at North’s school, they pointed out a friend’s artwork they wanted us to see.

After the show, we went out for frozen yogurt and I asked North what they’d learned about mandalas before they made them. Nothing, they said. So I looked it up on my phone. I learned they are geometrical configurations used in the Hindu, Buddhist, Jain religions in India, and the Shinto religion in Japan and that they represent variously: balance, unity, harmony, a spiritual journey, or cosmic and psychic order. Thanks, Wikipedia! North’s mandala is full of rainbows. (Look carefully at the spokes.) So I guess they got some of those concepts in, even without detailed cultural instruction.

Art can bring us all the things the mandala symbolizes. Over the course of the past several weeks, I’ve been savoring The Sound and the Fury, a book I haven’t read since I was a first-year college student, thirty-four years ago, and which was a pivotal book for me as a reader in ways I still remember clearly. I’m glad North has artistic outlets, too. While not every book, play, or painting takes us on a spiritual journey, every time we open ourselves up to art, there’s always a chance it will.