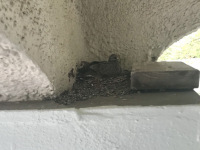 There was a three-week stretch between the end of Noah’s spring break and the beginning of North’s. The first week you’ve read about already—that was the week of North’s birthday and closing night of their show.

North came down with some kind of virus the middle of the second week and missed four days of school—the last two days of the third quarter and the first two days of the fourth quarter. They took a rapid covid test at home the first day they felt sick and it was negative. The next day we all went to the Silver Spring Civic Center for PCR tests. Beth’s and North’s came back negative and mine must have fallen through the cracks because I never heard back. I wasn’t particularly worried once we got North’s negative results, though, because they’re the one who comes into contact with the most people, so I didn’t pursue it. I’d had a sore throat and some congestion around the time North got sick but it never got more serious than that and Beth wasn’t sick at all. (Two days after we were tested Beth and I got our second booster shots.)

At the worst of it, last weekend, North had quite a high fever—it got up to 103.3 and they were pretty miserable with chills. They slept a lot, occasionally emerging from their room to eat or watch television. It’s always sad to see your child lethargic like that. On Sunday afternoon we cuddled on the couch and watched The Shining together. North said it wasn’t as scary as It. We’ve been on a horror movie jag and we watched both installments of that one recently.

In addition to the fact of their being sick, the timing of North’s illness worried me because I was afraid they’d miss end-of-the-quarter assignments and not be able to make them up. But they went back to school on Wednesday and they say they’re on top of everything. They came home from school pretty happy because they got a 98% on a five-page persuasive essay arguing against abstinence-only sex education that was their biggest third quarter assignment in English and the teacher asked for a copy to use as a sample for future classes. By Thursday they were well enough to stay after school and organize and put costumes from the play into storage, to come home long enough to make a pan of brownies for Zoë’s birthday, and to go her house for dinner and a movie. They’re having another friend over tomorrow to bake and watch a movie, so even though they’ve still got a lingering cough, I think they are almost recovered.

At the same time Noah was going through his own rough patch. He’s making a film for his advanced cinema production class and he’s been having trouble finding actors and a crew. Approaching people for this kind of thing isn’t his strong suit and after several people who auditioned either backed out or ghosted him he got so frustrated he was on the verge of withdrawing from the class. I felt sad for him as he’d been really looking forward to taking it and it’s ended up being very stressful for him. So I was proud of him when he texted me to let me know he’d talked about his problem in class and people volunteered for his crew. He still has no actors and he doesn’t have all the crew members he needs, but as of Friday he was saying he was going to stick with it. I volunteered to post a message to the IC parents’ Facebook page and he agreed and parents started responding right away. I posted last night and by this morning I’d sent his recruitment form to fourteen parents who expressed interest on behalf of their kids. We’ll see if that translates to some of those students contacting him and choosing to participate.

Through all this, I tried to mother both kids through food. I found a recipe for vegetable-chick pea soup with ginger and turmeric that claimed to be “the very essence of healing goodness” and made it for dinner on Monday night, by which point North had been sick for five days. They were actually already on the upswing by this point, though it would be a couple more days before they went back to school, so maybe the soup exerted some small effect. Meanwhile, I decided to send Noah a planned care package of Easter candy a little early, in hopes that a chocolate-hazelnut bunny, peanut butter eggs, mini eggs, and jelly beans would be cheering. I did not mail it in an Easter basket, for reasons of space, but I did pack the box with Easter grass. Noah was home last Easter and the one before because of covid so this was his first Easter-in-a-box from me. If he wants Easter eggs, I guess he’ll have to dye them himself as I don’t think they’d ship well.

While I was fretting about my sick and discouraged children, I also had two little mourning dove chicks on my mind. Every spring (and once in the fall) for the past several years we’ve had nesting birds on our porch and this year is no exception. This would be a joyful thing, but more often than not the babies never fledge because either the eggs don’t hatch or they do and the chicks are killed by predators. I don’t even know what kills them. According to the internet, it could be birds of prey, snakes, cats, dogs, or squirrels. Considering the nest is on a ledge near the ceiling of the porch and the column it tops is pretty smooth, I think it would have to be something that can fly (bird), jump (cat, squirrel) or reach the ledge from the porch wall (large dog). I (almost) never see any of these animals in my yard except squirrels, so that’s my best guess. I didn’t even know squirrels were omnivores.

The eggs did hatch this year and four days after I first caught of a glimpse of two babies being fed by a parent, I started seeing them unattended in the nest for short periods, and of course whenever I saw that, I’d worry for them. I kept counting the days since I first saw them and hoping they’d get bigger and fly away before something bad befell them. Several more days went by and I noticed the chicks, especially one, had grown quite a bit and the bigger one was starting to walk around the ledge and half-open its wings, which made me think it might be ready to fledge soon. (That’s a young bird, not a parent in the picture. The other one is obscured behind it.) Fingers crossed for a happy outcome.

So to sum up, North is mostly recovered and Noah has some leads and the chicks are still alive. Things could be worse.