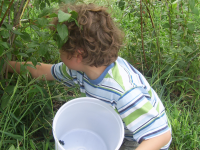 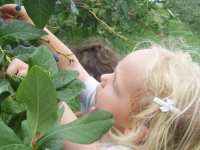 “One day, Little Sal went with her mother to Blueberry Hill to pick blueberries,” I read.

“Little Sal brought along her small tin pail and her mother brought her large tin pail to put berries in. ‘We will take our berries home and can them’ said her mother. ‘Then we will have food for the winter.’

June was snuggled up against me, half asleep. I’d awoken her a little early from her afternoon nap so we could make our yearly berrying trip to Butler’s Orchard (http://www.butlersorchard.com/). She wanted to go back to sleep and I was trying to get her interested in staying awake by reading to her. After I finished the book, I asked her. “Would you like to pick blueberries like Sal? There wouldn’t be any bears,” I hastened to add. “Just berries.” June was still too tired to answer, but she smiled around her pacifier. “Let’s check your diaper and put your overalls back on,” I said. “Then we’ll go.”

Beth showed June the berry pail she’d fashioned for her, a plastic pudding tub nestled in a purple Easter basket. Now June was wide awake and she ran all around the house carrying the basket. “It’s my own,” she declared.

The orchard was closing at five and it’s a forty-five minute drive so we’d hoped to leave by three at the latest, but it was closer to three-thirty by the time we’d left the house, filled the car up with gas and gotten underway. We’d invited a high school friend of Beth’s who now lives in the D.C. area and her three-year-old son to join us but they’d been unable to come. I was a little disappointed about that and also a bit concerned about the predicted thunderstorms. There were some dark clouds on the horizon but it didn’t look too threatening. It was a little cooler than it’s been for a while as well, which was nice since we were intending to spend an hour or so walking around in the sun.

During the drive Beth and Noah told a story-game involving a group of butterflies on a quest to liberate another group of butterflies from a museum. June made occasional (and random) contributions. I think in several months she might be able to participate in story-game in a meaningful way. And maybe soon after she and Noah could play without adult involvement. Dare we hope?

When we turned off onto the gravel road that runs through some woods toward the farm, Noah wanted to pretend we were explorers in a forest. He confided to Beth that driving on a road with no houses or people in sight was “a little scary.” No country boy, he, I reflected. Soon the woods cleared out and we were driving through cornfields lined with black-eyed Susans and Queen Anne’s lace.

The shuttle wagons that run you out to the fields on busy days were not operating so we drove straight out to the blueberry fields. It’s the tail end of blueberry season and we had to really search the bushes for the powder-blue berries. They were smaller than usual, too, so our pails filled slowly. Or maybe that was because June kept running down the rows and I need to run after her. She only got out of my sight once, but once was enough for me. I was more concerned about berry-pickers’ cars and farm workers’ tractors than bears. When she was with me, she was tossing green berries in my pail or digging around in it for ripe berries to eat. Occasionally she would stop to wipe her berry-stained hands on my white t-shirt and khaki pants.

I could have taken my cue from Little Sal’s mother and said, “Now, June, you run along and pick your own berries. Mother wants to take her berries home and can them for next winter,” except I didn’t really want her to run along (tractors remember?) and I don’t call myself Mother and the berries weren’t destined for canning, but for my Sunday morning oatmeal, homemade blueberry ice cream and blueberry kuchen (http://en.wikipedia.org/wiki/Kuchen). Besides, she was enjoying herself. There was space to run around, and things to put into other things, which is one of her favorite occupations. I trusted we’d get enough. Some years we’ve come home with eight or ten pounds of berries and not known what to do with all of them. We skipped our berrying trip last year so this was the first time she’d been since she was four months old. I had to spend that entire outing walking up and down the rows of bushes, carrying June in the front pack. If I tried to stop long enough to pick a handful of berries, she’d start to wail. This was a lot more fun. Noah was really focused on picking berries this year for the first time, too. He knelt down on the ground and found the ones Beth couldn’t see. She told him he had an “eagle eye.”

Around 4:45 we decided to make a quick trip over to the blackberry fields before getting the berries weighed and doing at little shopping at the market. The blackberries were plentiful and large and close together. In less than ten minutes, we picked a little over three pounds. Thirty-five minutes in the blueberry field had only netted us just under a pound and quarter of fruit. We stocked up on produce and farm market treats (kettle corn, an apple brown betty, bread and butter pickles, etc.) and checked out. It poured rain for several minutes while we were in the market. I only noticed since I went outside to use the restroom. Beth, Noah and June missed the squall entirely.

As we drove away, Noah read the sign that said, “Have a Berry Nice Day” and laughed. I have to say, that even with absent guests and light berry pails, it really was a berry nice afternoon.

From Blueberries For Sal, by Robert McCloskey, 1948.