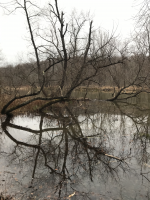 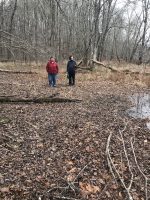 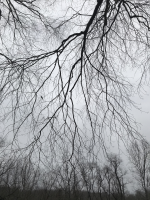 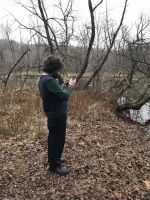 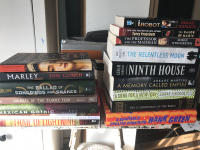 After we got home from Blackwater, there were another five days before work and school resumed. We squeezed in a little more holiday spirit on Wednesday night by going to the Festival of Lights display at Watkins Regional Park in Prince George’s County. My initial thought was to go on New Year’s Eve as the neighbors’ party we usually attend was not taking place this year and we had no plans. But then I realized a lot of other people probably had no plans on New Year’s Eve either, given the circumstances. So we thought it would be less crowded the night before New Year’s Eve.

We’ve never been to this display before. Last year we went to the walk-through one at Brookside Gardens for the first time and it was really magical. In non-pandemic times, I’d choose Brookside, but this one was nice, too. There was about a fifteen-minute wait to get in and then the display took a half hour to drive through. It was more extensive than I thought it would be and very pretty. In addition to the Santas, gingerbread people, and reindeer you might expect, there were also a lot of tunnels of lights, a big tree, and a few scenes from The Wizard of Oz. This is a tribute to the Wizard of Oz-themed playground in the park, I learned ahead of time from a review. The show is over now, but I recommend it for future years if you’re local and looking for this kind of thing. I wasn’t able to get any pictures because I didn’t want Beth to hold up the line of cars behind us by stopping, but there’s a video here if they haven’t taken it down yet by the time you read this.

Thursday afternoon, Beth, Noah, and I went for a walk near the Rocky Gorge Reservoir in Howard County. The main purpose of the walk was to make sure Noah’s drone was working, after the trouble he had with it at Blackwater. We do usually take a hike on New Year’s Day, but New Year’s Day the weather was predicted to be in the thirties and rainy, so instead of taking the first hike of the year, we took the last.

The first trail where we stopped near the reservoir was closed so we had to look for another one and while we were deciding where to go next Beth had to take a work call about the union that CWA has organized at Google. The announcement was going to be made the first Monday in January and preparation for it has been a big focus of Beth’s work recently. Noah and I ambled around a field near the parking lot while we waited for her.

Eventually we found another trail, and after a walk through the woods, we found ourselves in an austere and slightly spooky spot along the Patuxent River, where Noah flew the drone over the water and among the bare (and oddly shaggy-barked) tree branches with no problems. The river was still and flat as glass and there was very little sound other than occasional light drizzle hitting the dead leaves, two woodpeckers tapping on the trees, and the honking of geese in the distance.

North made rice noodles with tofu and broccoli for dinner and then we watched Soul, which seemed like a suitable film for thinking about new beginnings. The kids stayed up to see the new year, but Beth and I didn’t. I was half-tempted to do it, even though I don’t like staying up late, because it would have been satisfying to see 2020 make its exit. When Beth and I were still up at eleven, which is late for us, North was trying to convince us to stay up, as it was only another hour. We went to bed instead, but not before drinking a toast to 2021 with sparkling juice and eating twelve grapes, for good luck in the new year. The kids saved their grapes for midnight and then forgot to eat them.

Taking no chances with lucky foods, I made black-eyed peas the next day. Usually this is what we have for dinner on New Year’s Day, but as with Christmas, it fell on a Friday and that’s pizza night, so we had the black-eyed peas for lunch. I have been known to burn them some years so I hovered over the pot nearly the whole time they were cooking just in case.

We also have a fancy cheese tradition for New Year’s, which isn’t supposed to be lucky, we just like cheese. That afternoon I got out my cheeseboard, which always makes me happy, and I set out Brie, Manchego, aged cheddar and gouda, along with a pear spread and rosemary crackers my sister got us for Christmas so Beth, Noah, and I could have a mid-afternoon repast. (North’s not so big on the fancy cheese.) That night we watched The Banker, or most of it. We finished the next night.

Beth went grocery shopping and went to the Apple store to try to get North’s cracked iPad screen replaced, but I don’t think any of the rest of us even left the house Saturday and Sunday. Instead Noah and I finished reading The Shining and started I, Robot. We both have a lot of new books but he has more—we stacked them next to each other to check. And then he and I finished watching the second season of What We Do in the Shadows and he and Beth finished the second season of The Mandalorian. I read a couple stories in The Adventures of Sherlock Holmes and we all watched the second episode of Buffy, the Vampire Slayer, several weeks after we watched the first episode. Beth and I watched this show when it was on the air, starting in 1997, and it’s always been a favorite of mine. It’s fun to be watching it again. We’ve decided to make it a regular Sunday night activity.

The other thing I watched over the weekend was a one-hour video of my high school graduation a classmate put on Facebook. When I clicked I thought it would be a short clip, but it was the whole thing, and I thought, well, I’m not going to spend an hour watching this, I’ll just watch a little. But it turns out watching your high school commencement thirty-five-and-a-half years after the fact is oddly compelling and I watched the whole darn thing. All those young faces and familiar and half-forgotten names stirred something half-pleasurable and half-painful in me. High school wasn’t an easy time in my life, especially the first two years, but it was formative.

And I have a little anecdote that I think says something about human nature, or maybe just my nature. If you’d asked me before I watched the video if I won any awards at graduation, I would have hesitated, thinking maybe but I couldn’t remember, and if I did I wouldn’t be sure which one. What I did remember clearly is that I didn’t win a Spanish department award I thought I would. Watching, I learned I did win an English department award, sharing it with three classmates. Why should I remember the disappointment and not the recognition? Happening so close to New Year’s, it made me wonder if I should resolve to see the good that’s right in front of me. But that was more or less my intention starting this blog, almost fourteen years ago, and I think it has often served that purpose.

Monday we were all back in the saddle, attending classes and working online. North had English, ceramics, yoga, and Algebra. Noah attended the first class meeting of his winter term class on philosophy and cinema and practiced his drums for the first time in almost two weeks. Did I mention he’s taking online drum lessons at his old music school? He started in early December. I reviewed background materials and worked on an outline for a white paper on a sleep remedy. But no one had a longer or more profitable day than Beth. She set the alarm for 5:30 because the article in the New York Times about the Google union would be released at 6:00 a.m. She spent virtually the whole day on the phone with reporters from other news outlets. Here’s the Post’s story, which quotes her. It was an exhausting day for her, but she was pleased with how the launch went—“about as well as it could go,” she said.

2021 is off to a promising start so far. Fingers crossed for Georgia.

In re Georgia: Yippee!

In re the armed insurrection in the Capitol today: I really don’t know what to say. On the one hand, I’ve been afraid of something like this for the past four years. On the other hand, I was still shocked when it actually happened. And many people have said this already, but if it had been black or brown people trying to storm the building, it would have been a bloodbath.