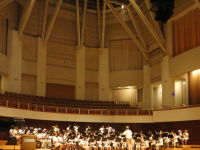 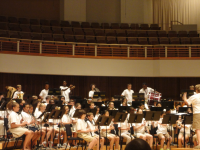 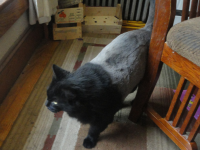 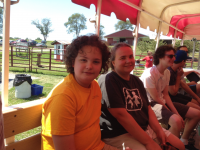 Every summer I write at least one blog post about how summer discombobulates me, the different camps every week, with different locations and different drop off and pick up times that mean I need to construct a new routine from scratch every week, only to start a another one once I get into the rhythm of the current one.  (Although two Fridays ago, on June’s last day of art camp at our local community college, I had so successfully turned my mind to the next week that I went much too far on the bus to pick her up because I was thinking of drama camp in Silver Spring, which was the next week.)

Then on the weeks when June doesn’t have camp, there’s the scramble for babysitting and the stress of trying to work while she’s at home.  I haven’t actually had that kind of week yet this summer because June’s been in camp five weeks out of six and we were on vacation the other week.  But as of Friday she’s finished her last camp.  Noah has one more week (a week of theater design, starting Monday). While he’s doing that, June will be having a three-day visit with Beth’s mom in West Virginia and then the next week we all head to Oregon to see my folks.

The last two weeks of break neither kid has camp.  I’ll be working, but fewer hours and I think knowing it’s the very end of break I’ll be more motivated to be the kind of summer mom I often wish I could be, full of fun projects and outings or lazy afternoons reading or playing cards on the porch.

Transportation was my main challenge this week. Early in the summer Noah was volunteering at June’s tinkering camp (located at their old preschool) and he walked her to and from camp most days.  It worked out so well I had him handle about half her drop-offs and pickups to musical drama camp the next week and a couple of the art camp drop-offs the week after that.  The first day they walked off the front porch steps together, June thrilled to be heading out into the world alone with Noah, and Noah seeming quietly pleased at the responsibility, I had to stop myself from running down the block after them.  But it was amazing how quickly I got used to the convenience.  Soon they were stopping at a pizzeria on their way home and bringing home pizza for dinner, and riding on public transportation together as if they’d been doing it for years.  And this week, when he had band camp and couldn’t pitch in with June’s transportation, I really missed the help.  I had to remind myself that when he was eight, I would have been getting him at camp every day while wrestling with a stroller, a diaper bag, and a nap-deprived tantrumming preschooler on the bus.  So it really does get easier, I assure you, if you are currently raising small children.

That said, I will note for the record that my circumnavigations between June’s drama camp, the library, June’s music school, and one trip to Noah’s band camp took me on twenty-two buses and six trains this week. And some of them were late, as is inevitable when you take that many buses and trains. Yet I was never late for a pickup or a drop off (well, once, by about three minutes, but does that really count?) and I only lost one SmarTrip and one umbrella. I think that’s a decent score.

But what I really intended to write about here was band camp, or mostly the band camp concert, as I was there but I was not at band camp.  Camp started on Sunday afternoon with a three-hour orientation. In addition to daily sectional practice with the other percussionists, Noah was taking three electives—technology, movie music (his friend Sasha was in this one with him), and composition. He was glad to get into that class because he’d wanted to take it last year.

Camp lasted from nine to four Monday to Friday and ended with a ninety-minute concert (thirty minutes for each age group) on Friday afternoon. The truly impressive thing about this camp is how they pull together a polished-sounding concert in just a week.

On Sunday night at bedtime, Noah said, “I should have practiced.” I asked if they’d been instructed to and he said no, but he thought he should. I was heartened to hear this, as he hadn’t touched his drums all summer and I’d hoped he would, if just to fool around with them. Anyway, for the rest of the week after a full day of band camp, he practiced, mostly on his orchestra bells, which were standing in for the marimba and vibraphone he’d play in the concert. He didn’t tell me much about camp and Beth, who was driving him and Sasha there every morning, said they were not talkative in the car either, but he seemed happy.

Friday afternoon I picked June up from drama camp an hour early to take her to Noah’s concert. She had to miss her own performance but we’d decided earlier in the summer that each child would have one performance that everyone in the family would attend. For her it was Cats; for Noah it was band camp.  Because the campers spent the afternoon rehearsing skits June would not perform in, the counselors gave her an “assistant director” role. She sat in the back of the room and told actors when they needed to speak more loudly.  She seemed pleased with this duty.

We met Beth at the College Park Metro stop, where she’d left the car in the morning and we drove to the performing arts center on campus. I really like this auditorium (especially when compared to listening to concerts on folding metal chairs in a middle school cafeteria). The seats are comfy, the ceiling soars and is a pretty golden color and an interesting shape, and best of all, there are risers on the stage so you can see the percussionists. We had fifteen minutes to wait, so I read June part of a chapter of The Wide Window, (book three in The Series of Unfortunate Events.)

The fifth and sixth grade band went first.  Among their numbers were “De Colores,” which made Beth and me smile because if you have two children attend a Spanish immersion elementary school you get to know this song very well.  They also did “Do You Want to Build a Snowman?” which I thought would be June’s favorite, but she said she liked “Creatures in the Attic,” which was full of spooky sound effects.

We finished our chapter while we waited for the seventh and eight grade band to take the stage. The conductor came on stage holding a large goose puppet. Noah later explained he did it so if any of them made a mistake they would know they were not the only ones who were embarrassed.

As I mentioned, we could see Noah better than usual, although I couldn’t always make out what he was playing if it was at waist level. The triangle and cymbals were pretty visible. (He’s the one playing cymbals in both pictures.) Consulting with him later I found he’d also played cabasa, wind chimes, and vibraphone. He liked “The Falling Rain” best.  He played cabasa and wind chimes in this one and there was audience participation—we had to snap when the conductor signaled for it. I liked “Cyclone,” but maybe just because the week I’d just had felt like one.

I was thinking as they played about a question a friend recently asked me about Noah and percussion.  I’d been explaining Noah’s slow processing and how it causes him difficulty at school sometimes.  Kevin wanted to know how he plays drums if it’s all about timing and doing things at exactly the right time.  I said I thought it was practice, that by practicing a piece over and over he learned how to come in at just the right place, which might be part of the reason he finds it satisfying, as coming in at the right time can be challenging for him, say, in class discussion, and you don’t get do-overs then.

I remember how when he was just starting to play, when he was nine, how every new song used to frustrate him—sometimes to the point of tears—because he wanted to be able to play it right immediately and he couldn’t. He’s still a perfectionist and could tell you every mistake he made in concert if you wanted to know, but he takes it in stride now. He knows mistakes come with the territory.  Plus there was a grown man with a goose puppet on stage, so how could he be embarrassed?

The ninth and tenth graders finished up the concert. Their last piece was called “Instant Concert” and consisted of snippets of well-known songs all strung together. “Thirty melodies in three minutes,” the conductor said. Hearing “Jingle Bells” and “Deck the Halls” in July made June laugh, but every familiar tune was fun to identify.  Here’s the full list.

After the concert we had pizza at a place I used to frequent when I was in grad school at the University of Maryland and then ice cream.  And so began a busy weekend featuring getting our middle-aged long-haired cat Xander shaved because he can’t reach his back to lick it any more and he had gotten mats in his fur, our annual berry picking expedition (always to the same berry farm) and my annual blueberry kuchen baking that follows said berry picking expedition, the kids running a lemonade stand/bake sale to benefit endangered species—June’s friend Megan helped with this—and music lessons for both kids.

In fact, on Friday night, going to bed, Noah said he thought he’d play his drums in the morning.   The next morning he had his first summer drum lesson—one of several he’ll have at June’s music school over the next few weeks to tide him over between band camp and the beginning of the school year.  Even though he’d been playing percussion all week he’d never actually played a drum and he said he felt rusty. Sure enough, Saturday morning around nine-thirty, I heard the controlled chaos of Noah’s drumming rising from the basement.

Noah and I are alike in many ways. I know my tendency to get rattled by admittedly small changes to my routine and my (closely related) need to think everything through carefully is just a milder version of his emphatic need for routine and his information processing challenges.  Even one of our cats, Matthew, can’t bear change.  Ever since Xander got shaved, Matthew’s been hissing and running away whenever he sees him, which leaves Xander looking completely baffled because it’s not their usual dynamic. I’m hoping it’s just the lingering smell of the shampoo the groomer used because his fur won’t grow back completely for four to six months. By then, I will be out of the cyclone and back in my comfortable school year routine and Noah will still be providing the steady back beat in the soundtrack of our lives.