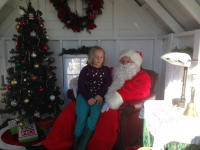 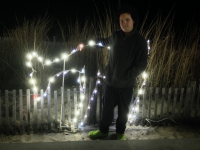 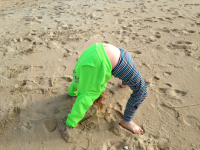 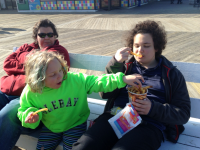 Beth worked from home Friday morning and took the afternoon off, so we could leave for our annual Christmas shopping trip to Rehoboth when the kids got home from school. After she drove Noah to school she swung by Starbucks and returned with a peppermint mocha, which she delivered to me at the bus stop where I was waiting with June. I knew then it was going to be a good day.

It was, even though we got to the beach later than expected. There was traffic around Annapolis and a detour toward the end of the drive. But we made the best of it, singing along with our Christmas music and admiring people’s lights as well as what we could glimpse of the light display at Sandy Point State Park from the highway. By the time we got to our dinner destination of Grotto Pizza it was 7:40, which is quite late for us to eat, and everyone was so tired and hungry we all just sat around the table silently until the food came and then we perked up a bit.

After dinner Beth drove the kids to the condo we’d rented. I walked there because it was just off the boardwalk and I wanted to see the ocean. It was a clear night, so as soon as I left the lighted portion of the boardwalk I could see a lot of stars, though the only ones I could identify were in Orion’s belt. I think if I lived at the beach, I’d learn all the constellations. I walked down onto the sand for several minutes and got close enough to the water so it almost touched my feet, yet somehow I managed not to get my Birkenstocks and socks soaked. I had the briefest flash of feeling the bigness and beauty of the world before I turned back to land.

I walked the block to the condo where Beth and the kids had been searching its somewhat confusing floor plan for our unit. They met me at the corner, coming down to get the luggage from the car, and cheerfully told me the building was “creepy” and “like a horror movie.”

It was a concrete building, with approximately thirty units in two levels over a parking garage, with balconies connecting the units like a motel. It was completely deserted—we never saw another soul coming or going or another lit window the whole weekend. It was also a bit down at the heel; there were rust stains on some of the outside walls, and cobwebs in the lobby. Also, the pool had been left uncovered and was full of dirty rainwater. Inside our unit was clean and comfortable, however. Our biggest complaint was a lack of blankets—we had to turn up the heat higher than we otherwise would have—and a lack of WiFi. But the location couldn’t be beat and there was a partial ocean view from two rooms, so I was satisfied. We did call it “the creepy condo” the whole time we were there, though, because that sort of thing amuses us.

7:30 Saturday morning found me on the beach. The last golden-pink light of the sunrise was still lingering when I arrived. One of the nice things about being at the beach in December is I can see the sunrise over the ocean without getting up any earlier than I usually do.

I watched the daylight get brighter and clearer. I walked north and noticed a big deposit of shells on the sand I thought June might like to see and I stood on wooden jetty (on one of the few pilings not covered with slick, wet moss) and watched the water rush in and out under my feet. After an hour, I returned to the house, hungry for the oatmeal Beth had made and left on the stove for me.

“How was the beach?” Beth said.

“Invigorating. I am full of vigor. I have the vigor of ten Stephs plus one. Or is it two?” I struggled to remember the line from the Grinch. I think it’s the strength of ten Grinches, plus two. We’ll see when we watch it this year.

After eating my oatmeal, I settled down on the couch to read June from a book about a zombie stuffed animal that wreaks havoc in an elementary school, suitable reading material for a creepy condo, I suppose.

Sometime around ten, Beth, June and I left to start our Christmas shopping, while Noah stayed at the condo to work. He was collaborating on a group presentation about contemporary drama with the members of his group contributing to a document in real time. They do this kind of thing a lot, the young people.

We started with a pit stop at Café a-Go-Go, where we’ve been getting coffee and pastries for ten years, and learned they were closing the next week, as the owners are moving to Texas. Maria was saying goodbyes and hugging customers and posing for pictures the whole time we were there. She and her husband Jesús will be missed. They’ve seen Noah grow up from a preschooler and June from an infant and they always remember us, even though we’re only in town two or three times a year. I was sad to hear the news, but Beth, who has spent many hours reading and drinking coffee there while I was at the beach, seemed stricken.

We hit our favorite stores: the book store, the seashell shop, the tea and spice shop, and the candy store. As we were exiting Candy Kitchen, we noticed Santa was in his little house on the boardwalk and was open for business, even though he wasn’t supposed to be there until three. June, who had been debating whether to ask for a gift certificate to get her hair dyed again or new ice skates, decided she’d visit Santa right then and ask for the hair dye. Santa commented he’d never had that request before but he’d see what he could do.

With that accomplished, it was time to think about lunch. We split up, with Beth and June going to a new build-your-own pasta bowl restaurant and me going to the Greene Turtle, which I patronize mainly for the ocean view, though I do like the apple-pecan salad. We invited Noah to join us, but he stayed at the condo and heated up leftover pizza.

Beth had developed a bad headache so after lunch she took to her bed and stayed there until dinnertime. I took June to the beach to collect shells, which she needed for someone’s gift. Never mind whose, it could be yours.

We went back to the condo where I was hoping to pick Noah up and take him Christmas shopping but he was still working on his drama presentation so I went alone. Before hitting the stores, though, I lingered on the boardwalk, watching the sky turn pinker and pinker. Late afternoon sunsets are another bonus of December beach weekends.

By the time I returned, Beth was well enough to get out of bed so all four of us went to admire the boardwalk lights and the kids posed for pictures with them. Then we got takeout (Thai and more Grandpa Mac) to eat in front of A Charlie Brown Christmas.

After June was in bed I quizzed Noah for a test on the Spanish-American War and WWI, using a very helpful collaborative study guide he and his classmates made.

We were packed and out of the creepy condo by a little after nine. We drove out to Lewes to have crepes at our other favorite coffee shop in Rehoboth, which is no longer in Rehoboth, having inconveniently moved up the highway last year. But when we got there, after a twenty-minute drive, it was dark and the furniture was all gone so I guess it didn’t survive the move and its name change, from Gallery Espresso to Paradigm. I ask you, is that an improvement? I think not. In fact, we kept calling it Paradox and Parabola and Parasail and Noah’s favorite, Parasite. Silly name or not, I was sad to see it closed. I really liked the pumpkin crepes there and it’s another place they always recognized us.

So we found somewhere else to eat, and then Beth took Noah Christmas shopping while June and I went to the Victorian-themed Boardwalk Plaza Hotel to look at their Christmas decorations. Next we took a walk on the beach, stopping at one of the rock-and-concrete jetties to observe the flock of seagulls that was perched there.

June was exuberant, singing Christmas songs and doing cartwheels and back bends on the sand. A passerby pointed out a white smudge on the ocean to the north of us and said it was a flock of thousands of snow geese. It wasn’t much to look at from that distance but maybe ten minutes later June noticed they had taken to the sky and we could see the air full of the migrating white birds. It was a beautiful sight.

We met up with Beth and Noah for Thrasher’s fries on the boardwalk and then we switched kids and I took Noah shopping. He was pretty efficient and between Beth’s trip with him and mine he got almost all his shopping finished by early afternoon. The kids and I went to say goodbye to the ocean, by putting our feet in for fifteen waves (it’s a tradition). June and I were wearing rain boots but Noah was barefoot. He didn’t start screaming from the cold until the eighth wave.

I was downcast on the drive home, even as I scolded myself for feeling that way. It had been a good trip. I got in some beach time and did a good bit of my shopping and helped both the kids nearly finish theirs. But for whatever reason, the weekend felt too short, like I wasn’t finished with it. Maybe I was wishing Beth hadn’t been feeling ill most of Saturday or that Noah hadn’t spent his second weekend in a row on the road, mostly doing homework in a hotel room or rented condo. Or maybe I just wanted to see another December sunset stain the sand in apricot tones before going back to my regular routine.