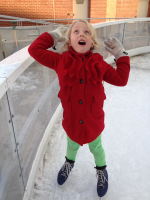 Saturday afternoon Beth took June ice-skating at the outdoor rink in Silver Spring for the first time this season. This morning June was eager to do it again. She’d “do anything” if Beth would take her skating, she said. Would she crawl under the dining room table and pick up all the dropped food, Beth asked. Would she study her GeoBowl packet and pick up all the pieces of the Operation game that are scattered on the living room floor, I wanted to know. June considered. “I’d do one of those things,” she conceded. (In the end she picked up the food and the game pieces and Beth took her skating.)

It has gotten colder rather suddenly. Our huge and prolific cherry tomato plant died pretty much overnight when the nighttime temperature reached freezing Saturday night. This morning I collected four and a half cups of little green tomatoes, which I plan to use to make a batch of salsa verde later this week.

I had a couple weeks of finding the cold and the early dark that came with the return to Standard Time depressing, but today when I left the swimming pool around 4:20 p.m. and walked out into a cold drizzle, I felt the warmth of my hooded sweatshirt as much as the cold of the rain and I noticed how the reds and the oranges of the turning trees seemed to glow in the dim light of an overcast mid-November late afternoon.

With the chill in the air, Halloween over, and Beth’s birthday and Thanksgiving around the corner it seems we are in a different part of the year, one with a lot of potential new beginnings. This month we applied to the Highly Gifted Center, where Noah spent fourth and fifth grade, for June and she started gymnastics at a new gym, since none of us much liked the one where she took classes a couple years ago. The new program is at the University of Maryland and is reputed to give the kids more individual attention and mentoring. June’s been to two sessions so far and is very enthusiastic about it. She especially likes the bars. Of course, busy girl that she is June has other things on her plate. Along with all the third to fifth graders at her school, she will take the test to try out for the geography bowl next week, although she hasn’t been very diligent about studying—despite her initial enthusiasm about being in the competition. Unless she makes a big effort between now and Tuesday I’ll be a little surprised if she makes the team. Looking ahead a bit, basketball practice starts in early December and she has a violin recital in mid-December (assuming she passes her audition, which she probably will).

Meanwhile after a lot of thought about whether or not he wanted to continue on the magnet track, Noah applied to the Communications Arts Program and a math/science magnet for high school. I wonder sometimes—this weekend for instance, when Beth and June were skating and I was swimming and Noah was stuck home reading and annotating Thomas Paine’s Common Sense—why he is signing up for more schoolwork. Then I remembered that he didn’t even have all that much homework this weekend, it just took forever because he could not seem to attend to it. Eighth grade continues to be less work than seventh, though he’s busier now than he was at the beginning of the year. Last weekend while June was at a slumber party we did find time to take him out to dinner at Asian Bistro and to a Buster Keaton movie at the American Film Institute. He’s been interested in silent film since his media class studied it in sixth grade. And the fact that he has been taking media classes for three years and discovered a rather esoteric new interest like this through the magnet program is one of the reasons he wants to continue. It makes sense, even if I worry about the effects of working so hard so young.

Noah also auditioned for Honors band. It was his first audition ever because he was nominated for Honors Band in sixth grade and didn’t have to try out and last year he didn’t want to do it. He was nervous before the audition and he says it didn’t go well. Sometimes he’s hard on himself, but he did fail to read the instructions carefully enough to notice he needed to get timpani mallets from his band teacher ahead of time so he couldn’t even play one of the required pieces. That can’t help his chances. (He also had to wait an hour and half after being called into the audition room to play, which I’m sure was stressful and may have affected his performance.) Whether he gets in or not, I’m proud of him for trying because it wasn’t easy for him. June, who has more moxie and has auditioned for recitals twice and for roles at drama camp several times already, was not particularly sympathetic when I told her he was nervous. “Oh, I’ve done that,” she said breezily.

It made me realize that in the space of just one month the kids will have applied for three academic programs and tried out for three extracurricular groups or events between them. It seems unlikely they’ll have universal success in these endeavors. I started to write something about how I wouldn’t even want that, you learn as much from failure as from success but then I deleted it because who am I kidding? Of course I want them to be accepted at the magnet programs where they applied and for June to play at her music school’s next recital and for Noah to make Honors Band and June to make the GeoBowl team and if she qualifies for the GeoBowl, I will want her team to win. But I also know it’s okay if they don’t. I don’t think they can do anything; no-one can. But I am proud of them for trying, always, no matter what the outcome.