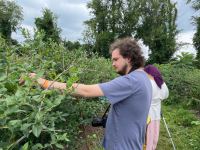 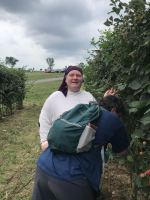 We’ve been home from the beach now for almost two weeks and while I can’t say we’ve had as much fun as we did there, life here is not devoid of fun. Here’s what we’ve been up to recently:

The weekend we got back, the kids and I watched the last two episodes of Stranger Things. Noah refused to watch it at the beach because he considered the resolution on the television there subpar and as a student of media, he takes the visual elements of entertainment seriously, at least for some shows. It was worth the wait. I mean, that last episode… Wow. Now we just have to wait another two to three years for the next season.

That Sunday, North and Ranvita had a picnic dinner/stargazing date. North made a peach-blueberry galette for the picnic (and we got to eat the leftovers). North and Ranvita been dating for several months now, but I only just received permission to mention that. I also learned recently in a very interesting conversation that in between North’s sixth-grade boyfriend Xavier and Ranvita, there have been three other romantic relationships I didn’t know about at the time. Beth and I had guessed one of them was an unrequited crush (“because she seemed to make you so unhappy,” I said when North told me and North said “She did make me unhappy.”) The other two just flew under our radar, including a relationship that lasted more than a year and a half, without us realizing the girl in question was more than a friend. They’re still friends, as it ended amicably.

That Friday it was the thirty-fifth anniversary of Beth’s and my first date, which we celebrate in addition to our wedding anniversary. I’d spent the week we were at the beach thinking about what to get her and I considered several options but when she told me she’d been to the bookstore to see if they still had t-shirts that say “Let Summer Begin” to replace a favorite of hers that’s getting a hole and that she hadn’t seen one in her size on the rack, I decided to go back and enquire if there were any in storage. The answer was no, but since Beth’s had this shirt for years and they’re still carrying it, it seemed possible they might restock before we go to the beach again in August, so I got her a gift certificate she can use if they do and for something else if they don’t. In a funny coincidence, she got me a t-shirt, too. I’d mentioned back in June that I don’t have enough gay t-shirts so she got me a purple one with the rooster that’s the symbol of Takoma Park, surrounded by the colors of the progress pride flag, arranged into a color wheel-type design.

We went out for pizza that night, sans kids. (They had Little Caesar’s delivered to the house.) We got a caprese salad, a vegetarian sausage and mushroom pizza, and gelato and ate it at a table tucked into in the alley next to the restaurant. I had two pieces of pizza and considering how my glucose monitor runs low, I probably went out range on that plus the gelato, but it was considered decision. I decided I wanted to just have what I wanted and except for a lemonade (I couldn’t quite go there), I did just that. I have no regrets.

While we were out, North was at their first babysitting job of the summer, for a two-month old baby girl. They sat for her again yesterday—it’s looking like it might be a semi-regular thing. North seems quite smitten with the baby—“so cute!”—and happy to have a source of income.

The other thing that happened that day was that Beth bought Noah’s airline ticket to Queensland, Australia. He’s leaving the Friday before Labor Day. He still needs to find housing and register for classes, but that step made it seem much more real that he’s actually doing this. I am happy for him to have this adventure, as he’s wanted to do it for a long time and it was delayed a year by the pandemic.

Sunday we went blueberry and blackberry picking. I wasn’t sure we’d go because it’s unusual for us to go berry picking twice in a year and we’d gone to pick strawberries in May. I’m glad we did, though, because it’s a fun family outing and we came home with two quarts of blackberries and five pounds of blueberries, plus produce, egg noodles, cheese, and treats from the farm market. I froze half the blackberries and most of the blueberries and we are working our way through the rest. I made the blueberry kuchen I make every year after berry picking on Monday night, substituting almond flour for half the flour and coconut sugar for half the sugar. It turned out a little more cakey than usual, but it was still good.

Tuesday I voted in the Maryland primary. It was the first time in a long while that I voted in person on Election Day but I didn’t get my research done in time to vote early and I didn’t get around to requesting a ballot to drop in a box, as Beth and Noah did. It was a really long ballot, with twenty-one offices to consider and for some offices you could vote for multiple people.

There was an advantage to going in person, though. It’s nice to see other voters and the poll workers and the people campaigning outside the polling place; it’s like watching the wheels of democracy turning. I told North that even though voting in the primary is more work than voting in the general (because there are actual decisions to make), it’s also more fun because the choices are generally good, and while I want the candidates I voted for to win, it will be fine if they don’t, so there’s less stress than in a general election when there’s more at stake. I anticipate the midterms, with control of both the House and the Senate in question, will be kind of agonizing.

North had applied to be a poll worker, but never heard back. I told them that at least at my polling place it looked like they weren’t short-staffed, so there probably wasn’t much need for new workers. They went to the movies with Ranvita that day instead.

On Wednesday North started the lengthy process of making focaccia (it requires multiple rises over two days) and babysat again, while Beth, Noah, and I finished season 4 of Buffy the Vampire Slayer. Originally I was hoping to finish two seasons this summer, but that’s looking unrealistic at our current pace, so now my goal is reaching the midpoint of season 5.

Today we ate the focaccia at dinner, with a Caprese salad. The focaccia was outstanding and it was nice to have a cold dinner, as we’re in the midst of a heat wave that’s only supposed to get worse. We might get into the triple digits on Sunday and we’re currently trying decide if that’s too hot to go to the pool, which we haven’t done all summer. (Will it be mobbed? Will the water be gross and warm? Or will it be the only thing worth doing on a day like that?) And that brings us up to date.

Steph Lovelady kissed a girl for the first time 35 years ago today and this morning talked with a roofer about repairs to the roof of the house where she has lived with said girl (plus kids and cats) for the past twenty years and tonight went out to dinner with her to celebrate the kiss and everything that came after.

Some of what came after is fun, like picking berries with our young adult and nearly adult children and gaining insight into their lives, and some is mundane, like talking to roofers about home repairs, but it’s all part of the life we’ve built together, day by day, over three and half decades.