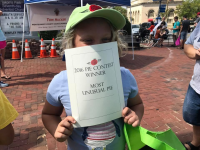 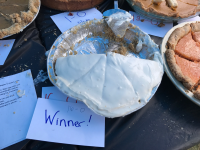 Well, if acting in an online advertisement and winning a small town pie contest count as steps toward fame, June’s getting more famous. In any case, she had quite the weekend.

The commercial consisted of kids doing things associated with older people, waltzing and playing bingo, specifically. I think the gist is that the Alliance for Retired Americans is working to ensure the social safety net for seniors is still intact when today’s kids are retired. I haven’t seen it yet. I’ll post it when we get a copy.

And yes, she won the Takoma Park pie contest, in the Most Unusual category. Her entry was a cantaloupe pie with a whipped cream/cream cheese topping. There were fifty-seven entries and seven categories: Best Apple Pie, Best Peach Pie, Best Other Pie/Sweet, Best Other Pie/Savory, Most Unusual Pie, Best Kid Pie, and Yummy Mess. The judges were local politicians, a food writer, a chef, and a restaurant owner.

June’s entered this contest three or four years running and because last year the judges were very late announcing the winners, I was wandering through the stalls of the farmers’ market looking for a raspberry-yogurt smoothie and I missed the announcement when they made it, five minutes early. June didn’t hear it either and had to run over when Beth was motioning wildly to her. She got there in time to receive her certificate, free farmers’ market hat and tote bag.

Then we got in line to buy slices of pie. The contest is a benefit, the proceeds of which buy vouchers for SNAP recipients to purchase farmers’ market produce, so when you enter, you’ve donated your pie and if you want to taste it, you need to buy a slice. (The contest ended up raising $956 for the SNAP Match Fund.) We bought two slices of June’s pie, a slice of peaches and cream pie, and a slice of apple caramel pie.

Beth told June she was proud of her for going her own way and being original. The contest used to be an apple pie contest but this year they opened it up to any kind of pie using in-season ingredients available at the farmers’ market. When June wanted to make a cantaloupe cream pie, Beth was skeptical about how it would taste. But June held firm and it was actually pretty good. I thought it tasted like a pumpkin pie, but without the spices and sweeter. I said we were also proud of her for not getting discouraged after having entered the contest a few times, without winning.

Then June launched into an earnest explanation of how when you don’t win something, you learn about how to do better and if you keep trying, you’ll eventually win. This has been her experience with the Halloween costume contest and the pie contest, and it seemed like it might be poor parenting to say some people never win, despite their best efforts, so I held my tongue.

If you’d like to try the pie, here’s the recipe, adapted from this one June found online.

Cover and refrigerate at least 2 hours before serving