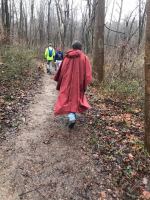 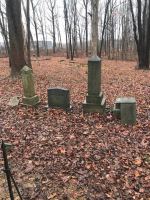 Last weekend Beth and I went on a First Day hike at Patuxent River State Park. These are organized by various state and municipal parks to encourage people to get out into nature on the first day of the year. We go on one most years, usually just me and Beth, as the kids are often tired from seeing in the new year, which Beth and I never do, even when we have a party to attend, which we did not this year for the obvious reasons. We generally either stay home or come home early, leave the kids with many bowls of salty snacks, and go to bed well before midnight, which is what we did this year. I think of it as sibling bonding time.

We chose a hike on a newly made trail that goes past Howard Chapel Cemetery, a small historic African-American cemetery where descendants of Enoch Howard—who bought himself and his family out of slavery and then bought the land of his enslavers—are buried. Despite the wet conditions, fifteen or twenty people (and three dogs, one charmingly named Ruthie for Ruth Bader Ginsburg) had showed up. Because the trail was so new and it had been raining earlier in the day, it was very muddy in places. One hiker slipped and twisted her ankle so one of the two rangers stayed with her until a park employee could come get her back to the trailhead.

The rest of us kept going, led by a very cheerful guide along the wooded path, up the ridge, to the cemetery and then back down. It took two hours and I didn’t slip and fall in the mud until pretty near the end. (I sustained no injury. The mud was quite soft.)

Back at home, I put together a cheese plate, which is another New Year’s tradition of ours, and we ate a lot of cheese. Later that day, I made Hoppin’ John for dinner, because it’s good luck and we are not taking any chances as we approach Year Three of the pandemic.

The first week back after break was an abbreviated one for North. We got seven inches of snow in the wee hours of Monday morning and that was enough for two snow days and a two-hour delay on Wednesday, when they finally went back to school. Thursday there was a full day of school and then it snowed again (three more inches) and they had Friday off, too.

If you’ve read this blog for a couple years or more you know I’m no fan of snow days, but more than a year of remote school has put things in perspective at least a little. Plus, I’m not sure in-person school should even be happening right now, with omicron what it is. I was a little grumpy about the snow days (because I just can’t help it) but I made the best of it. Given that the weather was unusually cold all week, I declared it Soup Week, and we had soup for dinner four nights last week (hot dog and bean, cheddar-broccoli, chili, and curried noodle soup). That was as much festive spirit as I could muster. And the snow did get both kids outside. North took a long walk with Zoë on Monday and Noah went out and took pictures of our yard (some featured here).

The not quite two days of school North did have were disrupted for other reasons as well. There are district-wide school bus driver shortages and their route was cancelled. Beth had to drive them to and from school Wednesday and Thursday, which is more of a hardship than it would be if their school wasn’t a half hour drive away. Two of their teachers (English and Psychology) are out with covid and they say attendance is as low as 50% in most of their classes. I don’t know if kids are out sick or their parents are keeping them home out of caution. I do know people who are doing that, so it was probably both.

The school district was using a metric that if 5% of students, faculty, and staff in any given school tested positive for covid, the school would go remote. Then between Tuesday and Wednesday of last week, it went from just a handful of schools at 5% or higher to 60% of the schools in our enormous school district (including North’s school) reaching that level. And then they gave up on that metric. In-school classes are continuing, but who knows for how long? If the district, albeit under pressure from the governor, changed its minds on a dime once, it could happen again. And the schools are stretched incredibly thin. Teachers have to use their free periods to cover for absent colleagues and sometime there’s just no teacher in the room and the kids just get a message about what work to complete in class. This has been the case in North’s psychology class. In Noah’s old high school (which is huge and has four thousand students) they are down to two janitors.

On Wednesday, before the 5% rule was abandoned, I started a pool on Facebook asking when people thought the school district as a whole would shut down under the weight of all these burdens. Everyone guessed it would be last week or early next week. But that doesn’t seem to be happening. There is going to be distribution of home test kits and KN95 masks to all students on Monday. I’m not even sure what I want to happen. To say remote school was not a good fit for North would be putting it mildly. None of us want to go back to that. But it would be worth it if a short closure, say two weeks or even a month, prevented a longer one later. But is that what would happen if the schools close their doors? I keep remembering how the two-week closure in March 2020 ended up stretching to April 2021. Honestly, I’m glad it’s not up to me.

Meanwhile, Ithaca announced on Friday that the first week of the spring semester will be virtual. It does not affect when Noah goes back because he has training for his IT job the week before classes start and those dates have not changed. Beth’s driving him up to school on the Sunday of MLK weekend and returning on Tuesday, his move-in day. Students (with limited exemptions) are required to be vaccinated and boosted, to test three days before their move-in days, and again on the move-in day, so I feel like the college has a clear, serious plan.  Of course, it’s a private college and it has more freedom to take effective health measures than a public school system that has to be open to everyone, vaccinated or not, and which is subject to pressure from the state government.

Before Noah was assigned his move-in date (just a few days ago) we were hoping we could all go up to Ithaca for MLK weekend and drop him off a day earlier. I do enjoy a road trip and seeing him in his adopted hometown. Plus, Ithaca is a fun place, with a lot of natural beauty and good restaurants (not that we would have patronized them in person). But North has school the day he moves into his apartment, so North and I will be staying behind. I am sad about this.

I’ve been kind of blue and discombobulated all week, truth be told. Partly it’s the disruption of our schedule, partly it’s not knowing what’s coming next, plus I’m still having trouble with glucose monitor reliability, which is really vexing me, and there’s more I don’t care to go into, but I’m hoping 2022 is an improvement over its first week. North got their booster shot today, so that’s a start.