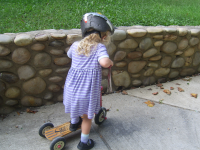 At half past three this afternoon, Noah was just off the school bus and settling into the sky chair to read the A Series of Unfortunate Events book #12 (The Penultimate Peril). This is his after school routine. Sometimes he will talk to me a little about his day, but more often he wants to dive straight into his book.

June was trying to pull the book away, wanting to look at its cover illustration. Thinking quickly to avert conflict, I asked her if she’d like me to bring Noah’s outgrown wooden scooter up from the basement to see if she was big enough to ride it. “”Yes!” she said, her face lighting up.

Noah got this scooter for his fourth birthday, when he was considerably bigger than June is now so I wasn’t sure she would be able to maneuver it. I thought it was worth a try, though, because she has been trying to ride his current, much bigger metal scooter and this 1) makes him mad and 2) doesn’t seem very safe since the handlebars are almost as tall as she is.

We went down to the basement and found the scooter, a little dusty and specked with rust. The bell is broken and the handlebars are out of alignment with the wheel. Undaunted, I brought it upstairs. “Am I big enough? Am I big enough?” June wanted to know. I told her we’d have to try it and see. I put her helmet on and took the scooter down to the sidewalk. I asked her if she’d rather practice in the driveway or go down the quiet side street that goes down the side of our yard. Being June, she wanted to go down the busy thoroughfare our house faces. I decided I’d just stay between her and the street and I said yes. We could go as far as the creek, I said. She wanted to go further but we hadn’t even told Noah where we were going so I didn’t want to be gone long. Based on the length of the chapter he was reading, I figured if we were back by four, he wouldn’t even notice we were gone.

She got the hang of it almost immediately on the level parts of the sidewalk. On even the slightest inclines, however, she struggled to make the scooter go forward. She sped down the downhill parts, singing a song of her own invention:

I am going!
I am going on my scooter!
I am the fastest little girl!

Then the scooter picked up speed and she got spooked and jumped off. I grabbed the handlebars so it wouldn’t roll away. “Maybe I’m going too fast,” she said, before climbing back on.

Our progress down the block was impeded by porcelain berries and dogwood berries and black walnuts and acorns, all of which needed to be collected. She tried to stuff them in my pockets as her dress had none. Finally we arrived at the bridge that spans the creek. I lifted her up so she could stand on the wall and look down at the stagnant water. We talked about how the water wasn’t moving and we need some rain so it can move again and then it won’t look so yucky.

The way home was mostly uphill so we pushed the scooter home, walking on either side of it.

June turned three and a half today. It does feel like we are suspended between two poles, sometimes careening down the sidewalk, sometimes briefly paused to gather nuts and berries, sometimes stagnant and stalled. She loves school and bubbles over every day with things to tell us about it. She had a great first day of soccer and can’t wait to go back. She picks up new skills (like the scooter) all the time.

But potty training is still going agonizingly slowly. She did agree to sit on the potty at school today for the first time there, I think, but Lesley said she wasn’t happy about it and she came home with different underwear and shorts under her dress than the ones in which she arrived. This is how it goes most days.

Even more discouraging: after a promising first two nights sharing a room with Noah, she started waking several times a night, asking me to come lay down in her bed, saying she was scared, and coming up with creative reasons she needed to leave the room. There wasn’t enough water in her sippy, there was too much water in her sippy. The glowing numbers on Noah’s digital clock disturbed her. (“He should not have a clock like that. He should have a clock that goes tick tock.”) One night she was out of bed nine times, though most nights it’s closer to two or three. It’s been about two and a half weeks and I am running on fumes. I regret moving her out of our room (we did it, after all, in hopes of getting more sleep), but we made such a big production of it, I don’t know how we’d ever get her out of our room if I crumble now. So I feel stuck.

Around 5:30, June was playing in the yard while I picked tomatoes and cilantro for black bean and avocado tacos. She didn’t want to come in when I’d finished, so I told her I needed to get dinner started so there would be time for cupcakes before Beth dashed off to her 7:30 meeting at June’s school. She came in reluctantly and then started insisting it wasn’t her half-birthday, she was still three. She seemed on the verge of getting seriously upset. I was surprised and asked if there was anything she thought would happen on her half-birthday she didn’t want to happen. She said no. Then I asked if there was anything she thought would happen before she was three and half that hadn’t happened yet.

“Yes,” she said emphatically, placing her hand just over her head. “I’m only this tall!”

“Did you think you’d be taller?” I said.

“Yes,” she said. Noah started explaining that she was small for her age and a lot of kids younger than her are bigger than her. It’s true, but I didn’t think this was the way to go. I shushed him.

“You’re just the right size for you,” I said, kneeling down on the kitchen floor to give her a hug. “We love you just the way you are.”

Noah either got it or lost interest in the question because he let it drop and June seemed satisfied.

After dinner, I set the cupcakes out on a plate. We’d picked them up at the bakery yesterday afternoon: vanilla with raspberry frosting for June, vanilla with vanilla frosting and salted caramel drizzle for Noah, German chocolate for me, chocolate with vanilla frosting for Beth. June helped me pick out the candles (two yellow, one pink and half a green one) and sang softly to herself.

I lit the candles and June blew them all out with one breath. I know we’re halfway between three and four, but there are a lot of other things I don’t know. Are we at the halfway point yet with potty training? With sleeping through the night? (And exactly how tall did she expect to be by now?) While I would certainly like to know, I don’t need to, to love her just the way she is.