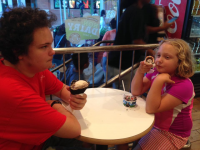 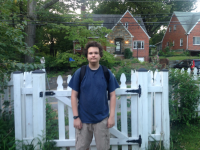 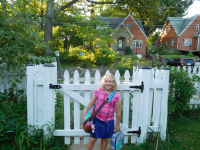 After we got home from Cedar Point, the kids had a week and a half before school started. I didn’t manage to get June very many play dates and a lot of the time she was bouncing around the house bored, when she wasn’t spending too much time playing games or watching television on the computer. She and Beth went shopping for school supplies and when Beth would only buy half her composition books with fancy covers—as a compromise because the floral ones were more expensive than the ones with the traditional black and white speckled covers—she set to work decorating the rest of the books with blue and purple sparkly tape until none of the offensively plain covers showed.

June also weeded, helped me make dinner one night and made it by herself another night, took laundry off the line for me, earned some money feeding the neighbors’ cat while they were on vacation, and made a batch of cinnamon cookies. On the last Friday of summer vacation, she was so bored she started making drinks out of ingredients she found in the kitchen and making me taste them. The salted caramel drink was quite salty, but there was a sour drink that was more palatable. I can’t remember what she put in that one, but it involved lime juice and maybe chocolate syrup.

Noah pruned some bushes, mowed the lawn twice, vacuumed twice, read a book on patterns of civic participation in American politics and made a grid with the thesis of each chapter, evidence and an evaluation of the evidence. This was his last assignment of the summer and he finished it Friday morning.

Both kids had a lot of appointments the last week—doctor, dentist, orthodontist. According to the doctor, Noah shrank a half inch over the past year. We’d noticed his growth had slowed in the past year, after a steady three-year growth spurt, but I doubt he’s really shorter than he was when he was fourteen. Maybe he’s slumping more, or maybe he’s had a more recent haircut.

We did manage to do some things that were more fun than getting poked and prodded by medical professionals. The second to last weekend we went to the Montgomery County Fair. In the goat barn we serendipitously ran into Megan’s family and so the girls got to pet rabbits, brave the haunted house, and fly through the air on the swings together. I rode the swings, too, behind my kids, and Megan and her sister. Fiona had her arms up in the air most of the time. She looked so joyous it was infectious.

The last Thursday before school started I took the kids on a creek walk, a late summer tradition of ours. It was nice to see Noah splashing in the water and enjoying himself after working so hard on his civics the past week. We saw many fish and crawfish and raccoon prints in the mud, and spider webs spanning the creek. June even found a turtle shell. It would have been just about perfect if I hadn’t lost my footing in the creek, fallen, and hit my kneecap hard on a rock. Two days later when I still couldn’t bend my knee, Beth took me to urgent care to make sure the kneecap wasn’t broken. It wasn’t. After another two days of wearing an ace bandage, taking prescription strength ibuprofen for the swelling, and icing it a few times a day, it’s a little better.

There was an Open House at June’s school on Friday afternoon, so I took June to meet her teachers. Mrs. F, her math teacher, seemed friendly and enthusiastic and all of June’s friends are in this class. She was disappointed to find she only has one friend in her English/social studies class. We didn’t find out who was in her Spanish/science class because she has the same teacher she had last year, Señora Y, and she didn’t feel the need to trek out to the portables to see her, as she knows what to expect from her.

June did, however, take the opportunity to introduce herself to the new instrumental music teacher and to tell him the sad story of how her parents were making her choose between Girl Scouts and orchestra. She failed to mention she’s also in the running club and taking an acting class and private voice lessons this fall. He diplomatically said he hoped to see her in orchestra.

June slept over at Megan’s house on Friday night and stayed there until early Saturday afternoon because we were longer at the urgent care than we thought we’d be. After resting a little, June and I went to see Pete’s Dragon, and then all four of us went out to dinner in Silver Spring, as no one was interested in cooking.

Sunday morning Noah asked me if there was anything he had to do and I said we were going out for our traditional last-night-of-summer-break ice cream in the evening and that at some point before then I’d like to read some in The Two Towers. He seemed pleased with that answer. We read in the morning while Beth and June were grocery shopping. We’ve gotten to a very satisfying part of the book. We’d left off the day before in the middle of the chapter in which the Ents are introduced (because I needed to leave for the movie) so we finished that and read the next one, in which it’s revealed Gandalf didn’t die when he fell into the abyss in Moria in the previous book.

After lunch, Noah was pacing around, seemingly at loose ends, so I suggested he go play his drums and he said, “That’s a good idea” and he went to do it. I listened to the fast and complex rhythms emerging from the basement with admiration, as I often do, and I hoped that he’d be in band this year. (Last year he had a schedule conflict.)

Before dinner, I was filling out forms I got at the Open House at June’s school and consulting with her on her first day outfit, which caused her to comment later, “I don’t get Mommy. How does Mommy think? Not colorfully obviously.” She settled on the pink and blue dress Beth’s mom got her for high tea at the beach at the beginning of the summer.

Before we left for ice cream, the kids carried yard waste bags from the back yard to the front curb where they joined bags of weeds and overgrown vines from our side yard fence that Beth had pruned earlier in the day. Beth glanced at her work. “It’s not perfect, but it’s progress,” she said.

Noah wanted to know if she was talking about him and June. No, she said, she didn’t expect them to be perfect, but she expected them to always be trying to make progress, and doing their best.

“This year is going to be terrible,” Noah muttered.

“This year is going to be awesome!” June exclaimed.

Noah was referring to the fact that tenth grade in the Communications Arts Program (CAP) is supposed to be the most challenging year. I reminded him that everyone who’s been through the Humanities magnet at his middle school and CAP says the hardest year in middle school—seventh grade—is actually worse than tenth (relative to the students’ ability at the time, one presumes).

On the way home, Noah glanced at his phone and noticed his Edline account (where assignments and grades are posted) had been re-activated so he checked his schedule to see if he was in band and he was. We all cheered and were happy for about thirty seconds and then Beth said, “Wait…Symphonic Band?” Symphonic Band is an audition-only band and he hadn’t auditioned. He’d requested the non-audition Concert Band, because he hates to audition. So it looked like there had been some kind of administrative snafu.

In the morning, Noah was ready on time. Beth took his picture at the gate and we watched as he walked off to the high school bus stop at seven a.m. An hour and twenty minutes later, and after much fussing over lunch preparations (she’s making her own lunch this year) I took June’s picture. We crossed the street to her bus stop where the parents made arrangements for June and another girl to walk to school most days. Naomi is in fourth grade and the only other kid left at our shrinking bus stop. Today June and Naomi took the bus, though, because they were both weighed down with school supplies. Naomi’s dad is going to walk with them the first couple days because she and her folks are all a little nervous. June continues to usher her peers into the exciting world of walking around in the world without adults.

Around seven hours later, June got home, saying, “I have something to show you.” It was a safety patrol belt. She didn’t know if she was going to be on the safety patrol until today and she had her heart set on it. Her assignment will be to take Head Start preschoolers from their classroom to the bus room.

She said Mrs. F, the math teacher, randomly breaks out in various foreign accents in class, but she favors the Russian accent. She had homework, to write a letter to Mr. S, her English/social studies teacher, introducing herself. “It’s good to be back to school,” she said.

Noah was home about fifteen minutes after June. He was pretty sure he was in the wrong band. In fact, he thought it wasn’t Concert Band or Symphonic Band but the Advanced Ensemble, which is definitely out of his league. So he’s going to fill out a schedule change request form at school tomorrow and I wrote his advisor, because I don’t expect resolving this to be easy or straightforward. I wrote on Facebook I wouldn’t mind Gandalf swooping in and fixing it for him. And while he’s at it, if he wanted to fix the air conditioning at Noah’s school, that would be nice, too.

At dinner, I asked June if being on the safety patrol was like being a prefect in the Harry Potter books. Yes, she said with satisfaction and then noted that while most kids on the patrol wear silver badges, about ten each month get gold ones, and that’s like being Head Boy or Head Girl, though not quite as good because there’s not just one.

They will always be my Head Girl and Boy, whether this year is terrible, awesome, or somewhere in between.