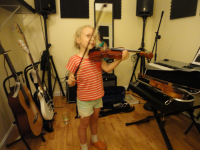 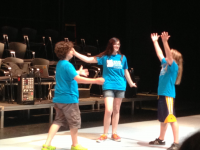 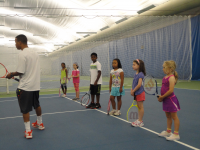 The first week back from vacation was difficult. We weren’t at the beach, for one thing, and it was very hot.  The temperature never broke 100 degrees, but it was close, in the high nineties every day from Monday to Friday and stiflingly humid. The heat index hovered between 100 and 110 degrees. At night it was still hot. It was never not hot, and except for the bedrooms our house is not air-conditioned, so editing technical brochures, ferrying June around on public transportation, or cooking dinner I was often out of sorts and at times I envied Beth and the kids their air-conditioned office and camps.

But I didn’t really envy Beth. She was stressed at work– she always is just back from vacation– but with all the Senate negotiations over confirmations of Secretary of Labor and to the National Labor Relations Board, it would have been a challenging week under any circumstances.

Meanwhile, June was at basketball camp at a middle school where the air conditioning was varyingly effective.  Some days I’d walk into the gym in the morning and feel a little relief from the heat, but it would only take a few minutes to realize it was still hot in there, just less hot than outside.  At least they kept June’s age group inside all day except when they took them outside to run through the sprinklers. (The older kids played on the outside courts some of the time.) It was a very active camp, as you might expect. They had drills and played two full games of basketball almost every day. In the end, I think it wore her out, even though she enjoyed it most of the week. On Friday she said she felt tired and didn’t want to go to camp. I kept her home a couple hours to determine if she was sick, but when I decided she wasn’t, I took her to camp late, over her cranky protests.

Her team did very well over the course of the week. Though we left in the middle of the last game so we could get to Noah’s performance on Friday and don’t know how it ended, they were 6 and 2 before that game in the running for the championship of their four-team division, the Big East (which for the first few days of camp June thought was the Biggies—she thought this was funny because the seven-to-nine year olds were the youngest division).

Even Noah, who was at Round House Theatre Camp, which he’s attended since kindergarten and which he loves, was less satisfied with the experience than usual.  He said it was fun, but he’s decided he’s just not that good at improv (this week’s theme). It makes some sense—thinking quick on his feet is not easy for him.

Beth’s and my twenty-sixth anniversary was Monday, but the timing wasn’t good for celebrating, and we’d had dinner together at the beach with Mom and Sara babysitting, and twenty-six is kind of anti-climactic anyway so we exchanged gifts at dinner, ate the cupcakes I picked up that afternoon, and left it at that.

These were the highlights of the week: the kids both started music lessons, Noah performed in an improv demonstration, and June had her second tennis lesson (her first was right before we left for the beach).  We meant to have Noah take drum lessons from the teacher he’s had the past two summers but the teacher wasn’t returning my email or calling me back. This was not particularly surprising, as he was always a bit flaky, which we put up with because he had a way with Noah.  Finally, I found out by contacting a music camp where the instructor used to teach that he’s left town.  Needing to find someone who could give Noah lessons for the rest of the summer, I decided to try the new music school that opened up in Takoma a few months ago.  And while I was at it, I signed June up for violin lessons, because she’s been wanting to do that.

Noah’s first lesson was Monday. I took him so I could meet the teacher, but I didn’t stay and I let him take the bus home himself. He self-dismissed from camp this week, too, which made my days considerably easier logistically. I was taking June to and from camp every day, and picked her up from a play date on Wednesday and took her to and from her violin lesson on Thursday.  I was on at least four buses a day and one day (it was Monday before Noah was authorized to self-dismiss) I was on seven. Noah also helped me out by cooking dinner while June and I were at her violin lesson on Thursday.

The violin lesson was much anticipated.  June’s allowed two activities at a time. This spring I made an exception and let her do three because the running club at her school was practically free (it cost five dollars) and only met for four weeks. But running club, art class, and gymnastics were all long over and until recently we hadn’t signed her up for any summer lessons or classes.  We sometimes don’t because she has day camps half the summer, and that seems like plenty to me, but she really wanted to start violin and tennis and she can be persuasive.

I came in to observe the lesson.  I won’t in the future because June says she would prefer I don’t—“It is a private lesson,” she emphasized to me.  But the teacher encouraged me to come in and I was curious to see what would happen, so I did.  The teacher showed her how to hold the violin and the bow, and she taught her the names of the strings.  Then she had June practice playing each individual string first with the bow, and then plucking them with her fingers.  Next she taught her a simple rhythm, part of “Twinkle, Twinkle, Little Star” and had her play it.  June seemed to like the teacher and was happy to be playing her instrument at the first lesson.  (We’d told her how when Noah took Suzuki violin lessons as a preschooler he had to practice how to stand and how to hold a fake violin for three months before he was allowed to have a real one.) June’s been good about practicing and is looking forward to her second lesson next week.

Friday was Noah’s improv performance. Despite what he said, I thought he did fine.  He wasn’t the best performer there but he was far from the worst. There were a number of different improv games.  The one he played is called “Random Phrases.”  The players are given a location and two items they need to incorporate into a skit (in this case, a big city, teeth and a lava lamp).  On the floor are several folded pieces of paper. At any point in the action a character can pick up a piece of paper, read what it says and try to make the phrase make sense in context. Noah’s phrase was “my ears are full of cheese.” It was pretty entertaining.  I also liked the skits that start in one film or television genre and then switch to another at a cue from a counselor. So a scene about two children losing their mother in the park can go from horror to war movie to romantic comedy to kung fu, etc.  You get the idea.

After the performance we stopped at the fountain so June could play in it. Noah’s decided he’s too old for this, though in this weather I would have done it in his shoes.  (I considered going in myself, even though there seems to be an unwritten rule about adults not doing this.  Why do kids get all the fun?) Next we had pizza at Zpizza and ice cream at Cold Stone.

Saturday we had a very pleasant day.  It was just a smidge cooler (mid-nineties) and better yet we spent the morning on a series of air-conditioned errands.  Tennis was first.  I missed seeing June’s first lesson because it was the morning we left for the beach and there was packing and chores to do. June missed the second lesson while we were at the beach, so this was the third one, for the group anyway.  The lessons are held in a huge white tent, which contains ten tennis courts. Two had kids’ lessons in progress. Adults were playing games on the others.  Most parents wait in the lobby and that’s what Beth did, but June didn’t seem to mind me and Noah coming to sit on the bench in her court and watch. Maybe that was because it wasn’t a private lesson.

There were eight kids in the group, seven girls and one boy, aged seven to ten.  They lined up and the instructor corrected the way they positioned their feet and held their racquets, for both forehand and backhand. (Later June said backhand was hardest because she missed the initial instruction for that.)  Then he threw two or three tennis balls to each child and gave them pointers.  Once everyone had two turns doing this, he sped things up, having the children run to where they were supposed to hit the ball and throwing it to them faster. Every now and then he’d stop to talk them through problems if they arose. Then he switched back to a slower pace and gave each child up to three tries to hit the ball. This time whenever a child hit the ball his or her turn was over.

The kids’ skill levels were all over the map. June almost always hit the balls the instructor threw but only one went over the net. This put her pretty much in the middle, as some kids sent every ball sailing over the net, and others missed almost every ball. Toward the end of the lesson, June got a bit antsy and started playing air guitar with her racquet while she was in line waiting for her turn, but overall she seemed happy and engaged throughout the lesson.

After a trip to the music store for new drumsticks and a drum key, Office Depot, and Starbucks we headed home. The kids and I watched Oliver! because that’s the musical June’s drama camp is doing next week.  We went out for Mexican because I didn’t feel like cooking dinner. It was a nice way to end a hectic week.

Sunday we had some welcome rain (just some sprinkles really but anything was welcome) and Noah had a three-hour orientation for band camp at the University of Maryland. In addition to percussion, he’s taking electives in world drumming, movie soundtracks, and technology. He was pleased with his assignments, though he’d hoped to get into conducting. Next week we’ll have two performances to attend—selected scenes from Oliver! and a band concert.  I’m looking forward to it.  Also, it’s supposed to be cooler, in the eighties most days. I think it could be a good week.